Charlottesville: The mother of a woman killed in a car attack during a white supremacist rally here last year told a jury on Monday that her daughter "was full of love, she was full of justice, she was full of fairness" – and that avowed neo-Nazi James Fields jnr "tried to silence" her by ramming his speeding Dodge Challenger into a crowd of anti-racism demonstrators.

"I refuse to allow that," Susan Bro testified in a strong but sometimes halting voice. 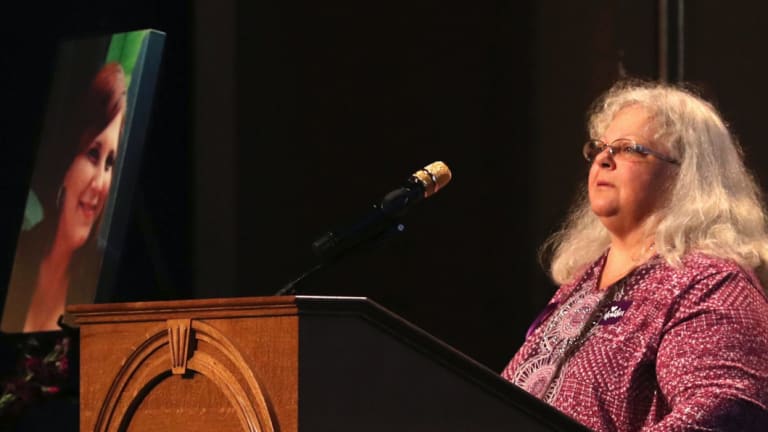 Susan Bro, the mother to Heather Heyer, speaks during a memorial for her daughter in August 2017.Credit:AP

Bro, mother of 32-year-old Heather Heyer, was the prosecution's fourth and final witness at the sentencing hearing for Fields, who was found guilty on Friday of first-degree murder and other crimes for an August 12, 2017, act of homicidal vehicular rage.

"Almost all members of our family have gone into grief therapy as the darkness has tried to swallow us whole," Bro said. Her daughter, who worked for a local law firm, had been described by friends as a committed advocate for social justice. "We are survivors," Bro said, "but we are much sadder survivors. We are forever scarred by the pain."

At his trial, which began November 26, Fields, 21, of Maumee, Ohio, did not deny plowing his car into a group of counter-protesters during the "Unite the Right" rally, at which hundreds of white supremacists and their opponents clashed in the streets. Fields' attorneys contended that he was afraid for his safety that early afternoon and acted to protect himself. But the jury rejected the argument. 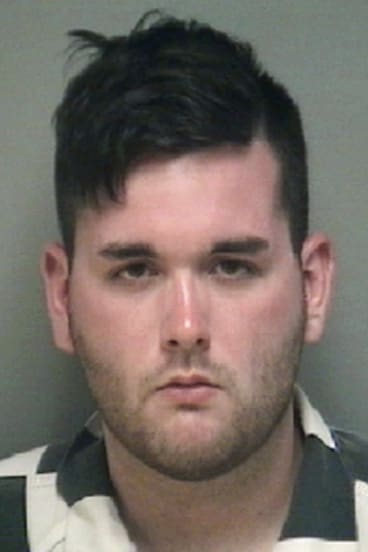 "I don't hate Mr Fields," Bro said on the witness stand. "I'm leaving him in the hands of justice."

The same jury that convicted Fields in Charlottesville Circuit Court will decide his punishment. After deliberating for 90 minutes, they recessed on Monday evening and will reconvene Tuesday morning. In addition to first-degree murder, Fields is to be sentenced for five counts of aggravated malicious wounding and three counts of malicious wounding related to eight of 35 survivors of the attack who were injured, many of them seriously.

The charges of murder and aggravated malicious wounding are all punishable by 20 years to life behind bars. Each of the malicious-wounding counts carries a five-to-20-year term. Fields also was found guilty of leaving the scene of a fatal crash, which is punishable by up to 10 years in prison.

The only defence witness in Monday's penalty phase, Daniel Murrie, a University of Virginia psychologist, portrayed Fields as a lifelong loner and social misfit given to angry, uncontrollable outbursts since before he was old enough to walk. He was diagnosed as mentally ill as a six-year-old and was housed in psychiatric facilities for three stretches before his 15th birthday.

Murrie, who said he reviewed thousands of pages of Fields' school and treatment records and spoke with him in jail for about 14 hours, described a deeply troubled young man. Some of the details were publicly known, but some had not been disclosed. 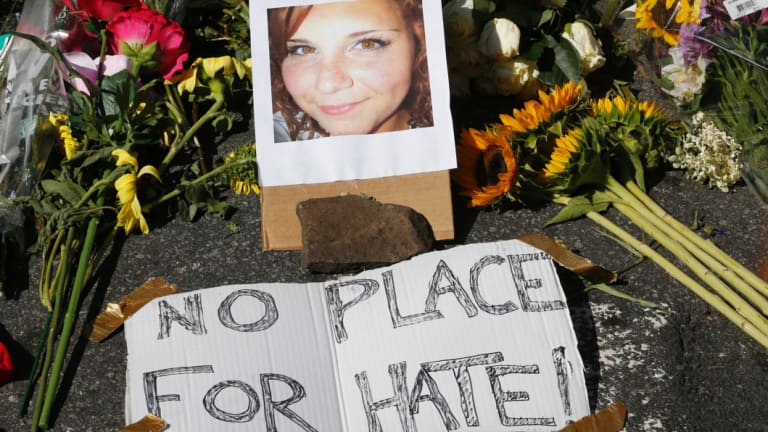 A makeshift memorial for Heather Heyer in Charlottesville. Credit:AP

Fields' father, who died in an car accident shortly before Fields was born, suffered from bipolar disorder, Murrie said. He said both of Fields' grandfathers, one of whom committed a murder-suicide, also were afflicted with the disorder.

He said that Fields was "expelled from pre-school" because of volatile behaviour and that the problems continued through grade school and beyond. In addition to being diagnosed with bipolar disorder when he was six, Fields displayed "autism-like symptoms" and was slowed by learning disabilities, Murrie said. 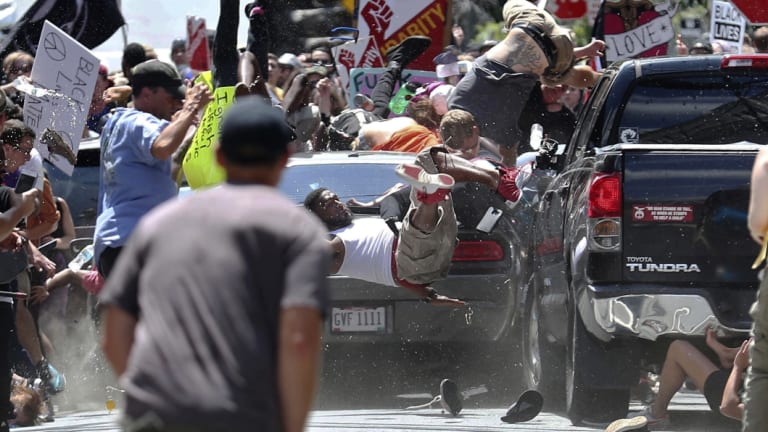 People fly into the air as James Alex Fields jnr’s vehicle is driven into a group of protesters in Charlottesville. Credit:AP

By age 14, when he was diagnosed with "schizoid personality disorder," Fields was taking a regimen of antipsychotic medications, he said.

"Those diagnoses are almost never given to kids," Murrie said. "It's very unusual."

As a teenager, he was accepted by Fishburne Military School in Waynesboro, Virginia. But while his mother was driving him there to enroll, Murrie said, the school called and rescinded its offer of admission because of Fields's history of taking psychotropic drugs. 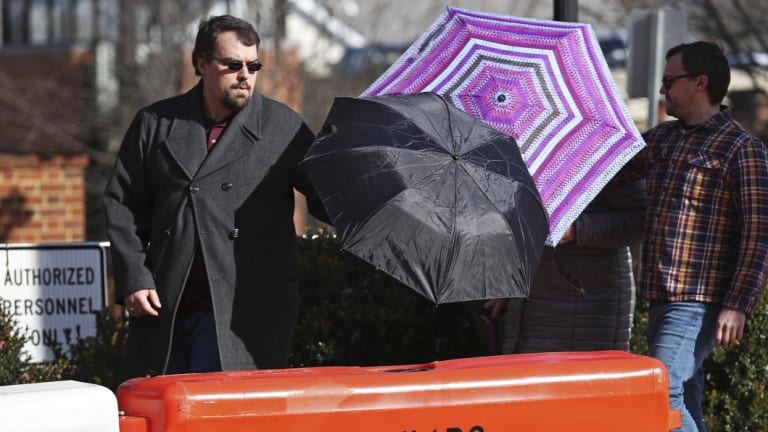 Activists block an attendee from media cameras outside the Charlottesville Circuit Courthouse during the murder trial of James Alex Fields jnr. Credit:AP

Back home, Fields, attending public school, told doctors that he wanted to be weaned off his medications so he could eventually join the army. "He did indeed stop" taking medicine, Murrie testified. But after graduating from high school, he washed out of Army basic training. This began "what he describes as a pretty depressing period" in which he worked at low-end jobs and played video games for sometimes "a hundred hours a week," Murrie said.

Acquaintances have said that Fields also became fascinated by Nazi Germany, voicing admiration for militarism and the racial-purity doctrine of the Third Reich. 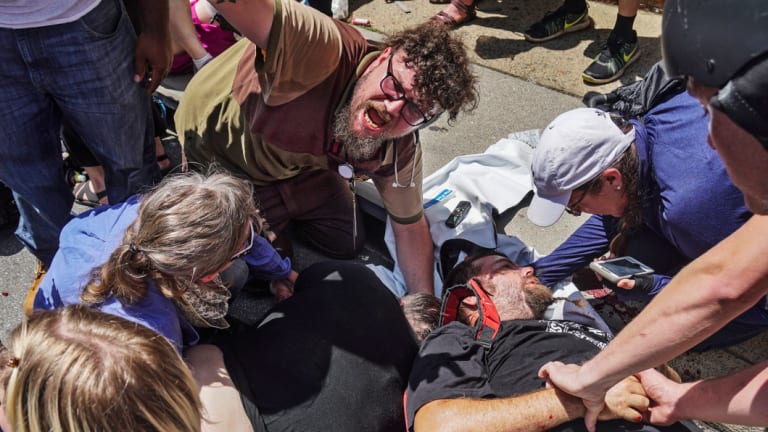 Responders work with victims at the scene where James Alex Fields jnr plowed a car into a crowd of protesters in Charlottesville in August 2017.Credit:AP

'I will never forget the look in her eye'

Before Murrie testified, three injured survivors described their physical and emotional wounds in harrowing detail to the seven women and five men of the jury.

"I'm going to try to explain it," said a woman who has been identified in court only as Lisa Q. She suffered numerous shattered bones, crippling nerve damage and other injuries from which she has not recovered. "But there's no way for anyone who wasn't there to understand it," she said. "It's weird to tell your body to do something you're used to doing and get no response at all."

After recounting her 16 months of psychological unrest and painful physical therapy, she told the jury, "Today I can come close to making a fist."

Jeanne Peterson arrived at the witness stand in a wheelchair after five surgeries on her crushed legs. She will undergo a sixth operation next year. Peterson was a friend of Heyer and saw her propelled into the air by Fields' car. 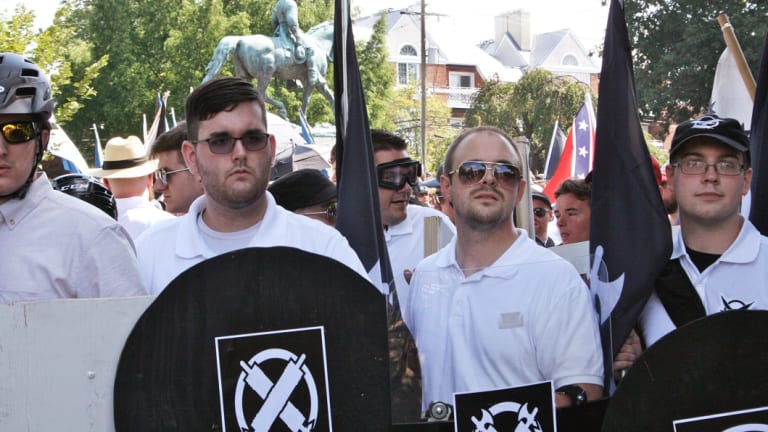 "I will never forget the look in her eye," said Peterson, who told the jury that she struggles with post-traumatic stress disorder "from witnessing a murder and surviving a terrorist attack". She added, "I would go through this a million times over if I could take away the pain this has caused the people I love," including her seven-year-old son, who "wrestles with questions I can't answer".

Another woman, Wednesday Bowie, whose pelvis was broken in six places, told the jury: "I am not the person I was before August 12th. I will never be that person again." And she said, "Please know that the world is not a safe place with Mr Fields in it."

Then Bro took the witness stand.

She said that when her daughter was hit by Fields' speeding Dodge, the impact severed Heyer's aorta and left her "skin and blood on the windshield of that car."

I am not the person I was before August 12th. I will never be that person again … the world is not a safe place with Mr Fields in it.

Her thighs were shattered, among other injuries, and "she bled out internally in just a few seconds," she said.

Fields sat silently at the defendant's table as the dead victim's mother continued, saying she has been unable to return to work since August 12, 2017.

"I can't concentrate anymore," she said. "Some days I can't do anything but sit and cry."