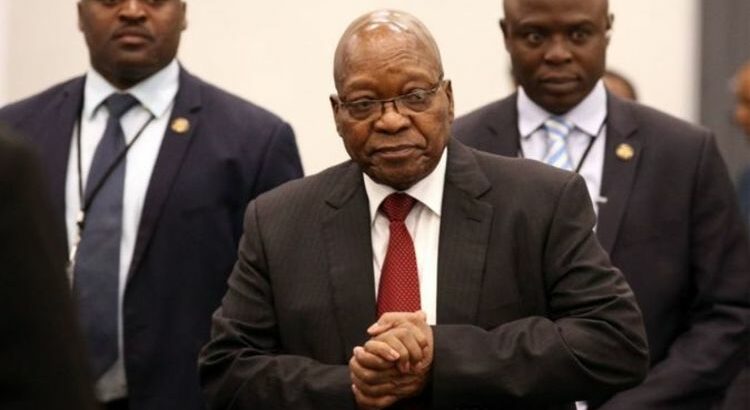 Looting and riots have been triggered across South Africa after Jacob Zuma handed himself over to police on July 8. The former president will now begin to serve a 15-moth prison sentence. In response to his jailing, shops have been looted, buildings set on fire and at least 500 have been arrested and six killed as the country faces a deadly wave of unrest.

Mr Zuma has been handed a prison sentence following a conviction for contempt of court after ignoring orders to appear before an inquiry into corruption during his presidency.

The former president denies corruption, and riots and violence have erupted in protest against Mr Zuma’s jailing.

Police have accused protestors of taking advantage of the unrest, widespread looting and violence have taken place affecting Johannesburg in particular.

The current South African President Cyril Ramaphosa said: ”What we are witnessing now are opportunistic acts of criminality, with groups of people instigating chaos merely as a cover for looting and theft.”

He added: “Acts of public violence of a kind rarely seen in the history of our democracy.”

He called for South Africans to “stand against violence” that has been triggered by the jailing of his predecessor.

Who is Mr Zuma?

He didn’t have an easy start; born to a poor rural family in Nkandla, Natal Province, his father died when he was just five-years-old and he received no formal schooling.

Mr Zuma was once a celebrated political figure and has enjoyed a reputation of being a former freedom fighter, having been jailed for ten years in 1963 for fighting the racist apartheid system in his country.

After his release, he went into exile in 1975 becoming the spymaster of the African National Congress.

He then returned to South Africa in 1990, becoming a key political figure rising to the role of president in 2009.

But he has since had a huge fall from grace.

Why is he being jailed?

In early July the judges of the Constitutional Court in South Africa sentenced Mr Zuma to a 15 months prison term.

He was handed this sentence as he ignored an order to appear before an official inquiry investigating the corruption allegations he faced during his presidency.

Allegations focused in particular on his relationship with the infamous Gupta brothers who fled South Africa in 2018 as the legal noose closed in on them.

All of them have denied the allegations of corruption with Mr Zuma accusing his political enemies of using the courts to target him.

He pleaded not guilty to all of these charges during a court appearance in May.