The World Health Organisation reported a record increase in global coronavirus cases on Friday, with the total rising by 292,527.

The biggest increases were from the United States, Brazil, India and South Africa, according to a daily report. Deaths rose by 6812. The four countries have dominated global headlines with large outbreaks. 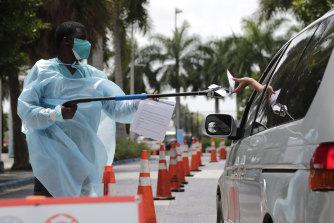 Healthcare worker Dante Hills passes paperwork to a woman in a vehicle at a COVID-19 testing site in Miami.Credit:AP

Nearly 40 countries have reported record single-day increases in coronavirus infections over the last week, around double the number that did so the previous week, according to a Reuters tally showing a pick-up in the pandemic in every region of the world.

Cases have been on the rise also in Australia, Japan, Hong Kong, Bolivia, Sudan, Ethiopia, Bulgaria, Belgium, Uzbekistan and Israel, among others.

Last week, cases in Latin America for the first time surpassed the combined infections in the United States and Canada, a Reuters tally showed. Infections are surging in Brazil, which is second in the world behind the US in cases and deaths.

Globally there are over 17.4 million infections and nearly 675,000 deaths, according to a Reuters tally.

British Prime Minister Boris Johnson has postponed a planned easing of the coronavirus lockdown in England after a rise in infections amplified fears of a second deadly surge in COVID-19 cases.

Just hours after Britain imposed tougher measures on swathes of northern England, Johnson announced that casinos, bowling alleys and skating rinks, due to reopen on Saturday, would remain shut for at least two more weeks. 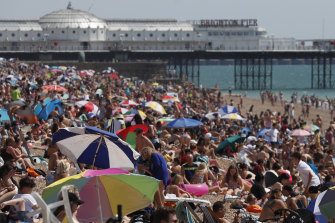 Beachgoers flocked to Brighton Beach on Friday as the temperature hit 35 degrees, the hottest day of the year.Credit:AP

Wedding receptions would also not be allowed.

"We're now seeing a warning light on the dashboard," Johnson said at an online news conference from Downing Street when asked about a second surge.

"Our assessment is that we should now squeeze that brake pedal in order to keep the virus under control."

The announcement came as the temperature reached into the high 30s across England on Friday on what was the hottest day of the year so far, with people flocking to the beach.

Britain's death toll from COVID-19 is more than 55,000 when deaths from suspected cases are included, and it has the highest "excess death" rate in Europe.

The abrupt halt to the unwind and the imposition of stricter restrictions on more than 4 million people were the biggest reversal to date in Britain's path out of lockdown.

"I know that the steps we are taking will be a real blow to many people," Johnson added. "I am really, really sorry about that but we simply cannot take the risk."

As the world grapples with a possible second wave, Johnson said the virus was gathering pace in Asia and Latin America while continental Europe was struggling to keep it under control.

The virus, which first emerged in China, has already killed at least 670,000 people and battered the global economy. Britain reported 846 new cases on Thursday, the highest daily number in more than a month.

UK scientists are no longer confident the reproduction number in England is below 1, the government said on Friday, meaning the epidemic could be growing again.

A separate survey also showed infections were on the rise for the first time since May.

"Evidence from Europe implies that we should take the apparent increase seriously, as acting too late can make lockdowns longer and increase mortality," said Daniel Lawson, lecturer in statistical science at the University of Bristol.

"The UK is clearly close to the tipping point in which the infection grows … We should be prepared for further rapid action to prevent the infection from getting out of control again." 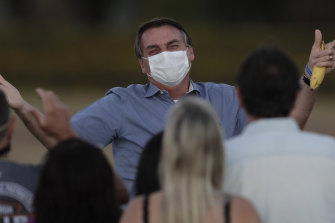 Having spent most of July self-isolating at his official residence in Brasilia, Bolsonaro said last weekend that his last coronavirus test was negative.

However, a week back into his normal schedule, the President said in his weekly live broadcast on Thursday that he felt weak and the test results revealed an infection.

"I just had a blood test, you know, I had a little weakness yesterday, they even found a little bit of infection too. I'm on antibiotics now. … After 20 days indoors, I have other problems. I have mould in my lungs," he said.