Who reprogrammed the Maybot? The PM is praised for her ‘human’ address from Chequers sofa – but ‘Brexit hardman’ Steve Baker can’t bear to watch it as he joins mockery from her critics

She is mocked by critics as the ‘Maybot’ because of the often robotic delivery of her interviews and speeches to the nation.

But Theresa May has drawn some rare praise for the homespun style of her weekend social media message from Chequers, with one Tory critic saying it was her most ‘human’.

But the two-minute clip, delivered while the Prime Minister was relaxing on a sofa in the oak-panelled luxury of her Buckinghamshire retreat, has not enthused everyone.

It prompted a wave of mocking memes on Twitter and attracted criticism from one of the most hardcore of her backbench Brexiteers.

Sitting back with one arm resting on the arm of a sofa, and speaking directly to camera, Theresa May used a colloquial tone to tell voters she disagreed with Labour but claimed on Brexit the two sides agreed on ‘ending free movement, ensuring we leave with a good deal, protecting jobs, protecting security.’

Johnny Mercer, the Tory MP for Plymouth Moor View, welcomed the clip, tweeting: ‘Excellent, and above all, human. In three years, her best.

‘Pretty clear where we are; a disastrous election and the intransigence of some colleagues *on both sides* have left her no choice. No point whinging about it; let’s redouble our efforts this week.’

Steve Baker, the deputy chairman of the European Research Group of eurosceptics, told Sky News that it was Mrs may’s fault that the UK now faced either getting ‘Brexit in name only’ or no Brexit at all.

The self-styled ‘Brexit hardman’ said: ‘I struggled to watch the whole thing. We are in this mess because of choices the Prime Minister made.’ 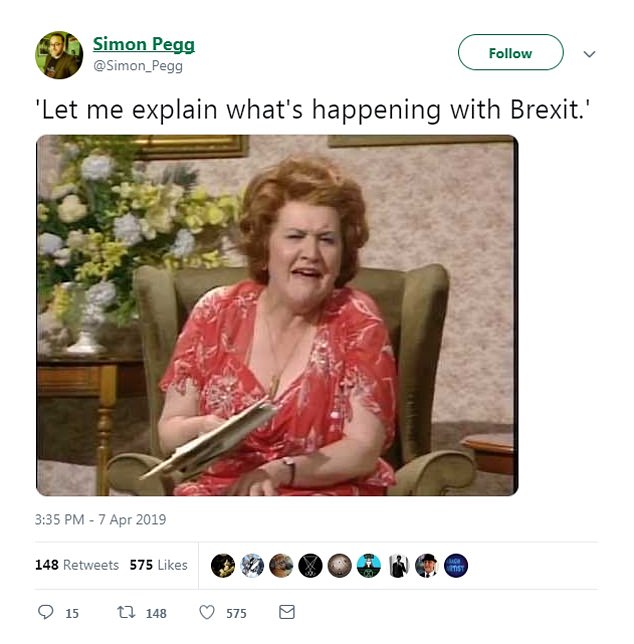 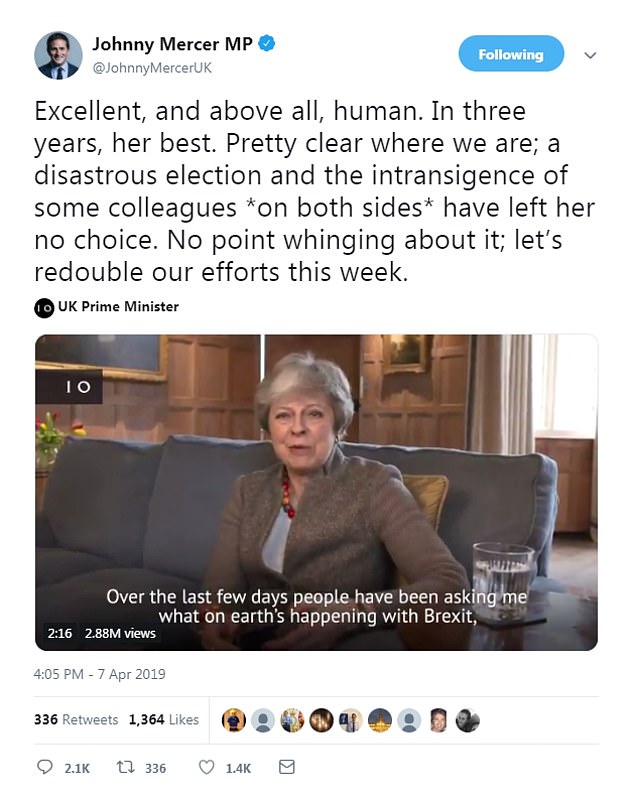 But the change in style was appreciated by some, including Tory backbencher and former soldier Johnny Mercer

Her comments on Sunday came after Jacob Rees-Mogg called Mr Corbyn’s inclusion in talks ‘a mistake’ and Commons Leader Andrea Leadsom said the Tories were working with him ‘through gritted teeth’.

With a note of laughter injected into her delivery, Mrs May said: ‘It’ll mean compromise on both sides, but I believe that delivering Brexit is the most important thing for us.’

Despite having been heavily criticised for two years for refusing to include other parties in the Brexit process, Mrs May added: ‘And when you think about it, people didn’t vote on party lines, when it came to the Brexit referendum, and you know I think often that members of the public want to see their politicians working together more often.’

Mrs May’s soft Brexit talks with Labour are back on today as the EU holds No Deal crisis talks in Ireland.

The Prime Minister is risking civil war with her own party by pursuing a softer Brexit, with Boris Johnson calling it a ‘surrender’ and warning his party leader: ‘It cannot, must not and will not happen’.

Mrs May paved the way for a customs union deal with Labour last night as she pledged to ‘compromise’ to ensure Brexit happens after talks broke down on Friday.

Culture Secretary Jeremy Wright gave a big hint that the PM could be willing to offer Labour a deal and said: ‘The conversations with Labour are ongoing, and I believe they will continue today. Everybody needs to compromise – it isn’t just the Government. We all need to find a way through [on Brexit]’.

Yesterday, in an informal video statement filmed on a Chequers sofa aimed directly at voters, Mrs May argued she had no choice but to try and find a cross-party agreement with Jeremy Corbyn because otherwise Britain might not leave the EU at all.

She pointed out the referendum campaign was not fought on party lines and said members of the public wanted to see politicians ‘working together more often’.

Labour say they are ready to talk today with shadow transport minister Andy McDonald saying Mrs May offering to stay in the customs union ‘could be a productive step’.

He added that if Labour’s softer Brexit proposition is ‘accepted in its totality’ it could reduce the argument for a second referendum.

Arriving in Luxembourg for a meeting of the Foreign Affairs Councils, Mr Hunt told reporters: ‘We are doing absolutely everything we can to try and get a resolution to get Brexit over the line.’

He said the Government was going into the talks with Labour ‘sincerely’ but said ‘in our system’ it is ‘very, very difficult’ for Theresa May to open talks with Jeremy Corbyn. 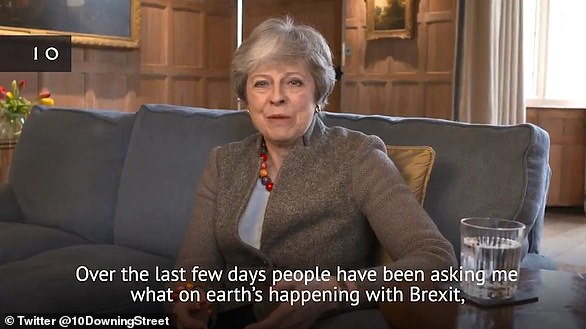 Theresa May was filmed sitting on a comfortable sofa with a drink by her side in a wood-panelled room at Chequers. It had a more relaxed feel, even down to wobbly camera-work

‘Over the last few days, people have been asking me what on earth’s been happening with Brexit.

‘And I can understand that, because after all it’s nearly three years since people voted in the referendum, for the UK to leave the European Union.

‘Well where we’re at is that the government negotiated a deal with the EU, and my preference was for that deal to be passed by Parliament and we could leave the EU on that basis.

‘But Parliament’s now rejected that deal three times, and right now as things stand, I can’t see them accepting it.

‘But at the same time Parliament has also said that they don’t want us to leave without a deal. – with no deal.

‘Indeed this very week Parliament’s been legislating to block no deal.

‘So the choice that lies ahead of us is either leaving the European Union with a deal, or not leaving at all.

‘Now I think, the Government thinks, we absolutely must leave the European Union., We must deliver Brexit.

‘That means we need to get a deal over the line, and that’s why we’ve been looking for new ways – a new approach – to find an agreement in Parliament, and that means cross-party talks.

‘And when you think about it, people didn’t vote on party lines, when it came to the Brexit referendum, and you know I think often that members of the public want to see their politicians working together more often.

‘Now there’s lots of things on which I disagree with the Labour Party on policy issues, but on Brexit I think there are some things we agree on.

‘And so we’re talking.

‘Can we can we find a way through this, that ensures we can get a good deal, and a deal agreed through Parliament.

‘It’ll mean compromise on both sides, but I believe that delivering Brexit is the most important thing for us.

‘I think that people voted to leave the EU, we have a duty as a Parliament to deliver that.