TODAY'S Google Doodle pays tribute to Lucy Wills, a British scientist who prevented many birth defects with her crucial research, on her 131st birthday.

But who was the haematologist and did she discover folic acid? Here's what we know about her. 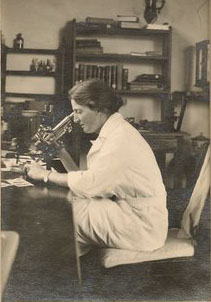 Who was Lucy Wills?

Lucy Wills was a leading haematologist who conducted seminal work in the 1920s and 1930s.

Her crucial research led to the creation of a prenatal vitamin that helps prevent birth defects.

The vitamin – folic acid – is a man-made form of vitamin B, which is found in dark green vegetables and citrus fruits.

It is important for the creation of red blood cells and for women before and during pregnancy to prevent birth defects in the baby's brain and spinal cord.

During her clinical trials, Lucy found that a laboratory monkey's health improved after being fed the British breakfast spread Marmite, made of a cheap yeast extract.

Her discovery was the first step towards the creation of folic acid.

For many years it was the Wills Factor until folic acid was named in 1941 when it was isolated from spinach.

She never married or had children.

What does her Doodle show?

In her Doodle, Lucy is depicted as the second O in the Google logo.

The researcher is seen holding a jar aloft.

In front of her is research equipment and a slice of bread spread with Marmite – a nod to the yeast extract that was crucial at the beginning of her research.

In 1998, the search engine founders Larry and Sergey drew a stick figure behind the second 'o' of Google as a message to that they were out of office at the Burning Man festival and with that, Google Doodles were born.

Google kicked off 2019 with an animated Doodle of New Year's Eve celebrations.

And on February 5, 2019, the Chinese New Year was celebrated with a hand animation transforming into a pig.

St Patrick's Day in March 17 was remembered with a Celtic Google Doodle.

And on March 21, Google Doodle used AI for the first time in a tribute to Johann Sebastian Bach.

The Doodle allowed users to create their own tune.