From Italy to the US, the far right throws support behind the Syrian government as it is accused of war crimes. 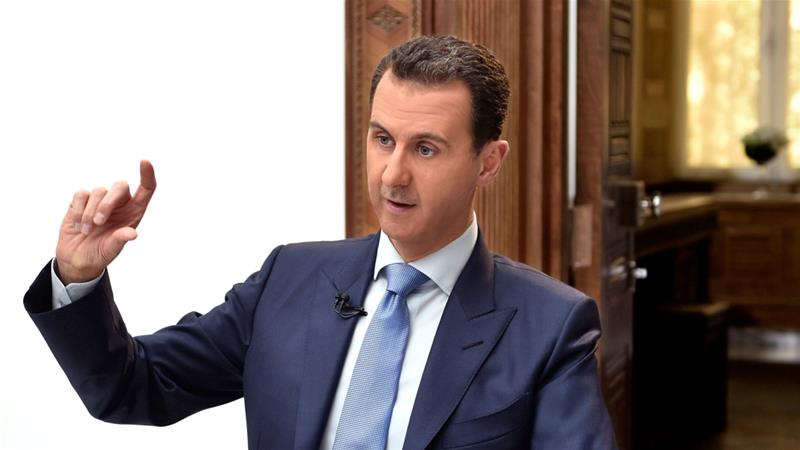 Rome, Italy – Six and a half years into the ongoing bloodshed in Syria, General Issam Zahreddine, infamous for breaking the suffocating three-year siege of Deir Az Zor, was killed by a landmine.

He died in October 2017, when his vehicle hit an explosive in Hawija Saqr during the government’s military campaign against the Islamic State of Iraq and the Levant (ISIL, also known as ISIS).

For supporters of the Syrian opposition, Zahreddine was the “butcher of Deir Az Zor” and a leading culprit behind widespread torture that allegedly took place at the hands of authorities.

For Assad supporters, however, the general and the Assad government represent a fortress against the ethnic and religious sectarianism of a conflict which has provided few viable alternatives.

In May 2016, a year and a half before his death, photos circulated on social media appeared to depict Zahreddine posing next to the severed remains of people who were killed, sliced up and left hanging.

Yet outside Syria, from North America to Europe, some of Assad’s most vocal supporters come from the far right.

Days after Zahreddine’s death, posters mourning the general appeared across Italian cities and towns, according to a report by the Italian daily, La Stampa.

Those posters were printed by CasaPound, a self-proclaimed fascist party and one of many far-right groups worldwide that support Assad’s government.

Along with Italy’s far-right Forza Nuova, Greece’s neo-fascist Golden Dawn, the UK’s British National Party (BNP) and Poland’s ultranationalist National Rebirth, among others, CasaPound is part of an international front rallying on behalf of the Syrian president and sending solidarity delegations to the war-ravaged country.

Syria’s conflict, which started as a mass uprising against Assad’s rule in March 2011, quickly morphed into a full-fledged civil war and has claimed the lives of hundreds of thousands of people.

Throughout that war, both government forces and their allies and armed opposition groups have been accused of war crimes and human rights violations.

According to some estimates, more than 11 million people have fled their homes, finding refuge outside of the country or ending up internally displaced within its borders.

More than a million Syrians have received or requested asylum in Europe, where rising far-right parties and populist groups have regularly rallied against their presence.

Sitting in a neatly organised conference room in CasaPound’s headquarters, a municipal building the group squatted 14 years ago, the party’s prime ministerial candidate in the upcoming elections, Simone Di Stefano, boasted of their relationship with the Syrian government.

“Of course, we like the ideology of the Syrian state, but we also support what they represent: freedom, openness as opposed to fundamentalism and modern [Arab] socialism.”

In Italy, CasaPound has led far-right demonstrations against refugees and migrants, has reportedly attacked anti-fascists, and advocates a return to fascist rule – under which the country toiled from 1921 until its liberation at the end of World War II in 1945.

The party has worked closely with the European Solidarity Front for Syria (ESFS) – a coalition of neo-fascist and far-right groups that support Assad’s government – and its members have joined delegations to Damascus to meet Syrian officials, Di Stefano said. 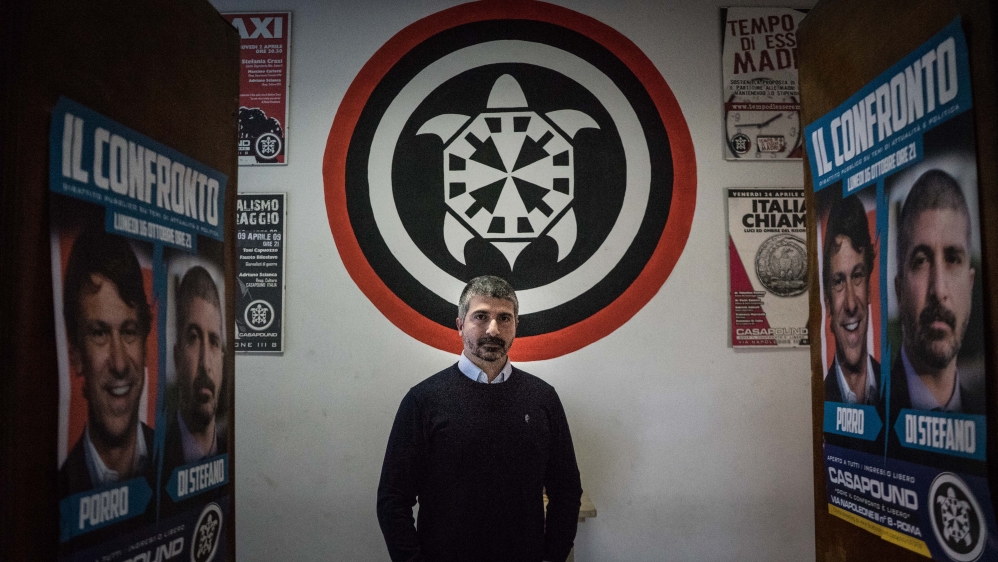 In May 2016, when ESFS members met Assad aide Bouthaina Shaaban, SANA reported that the Italian “delegation expressed solidarity with the Syrians and condemned the crimes committed by armed terrorist organisations”.

The group was full of hopes of “learning about what is happening in Syria and conveying the true image of the situation to the European people”, the report continued.

Di Stefano, who himself has not been to Syria, proudly proclaims that CasaPound affiliates met Syrian First Lady Asma al-Assad in 2016.

Ada Oppedisano, president of Solidarite Identites (Sol.Id), a group that has pushed a pro-Assad narrative, later described the meeting as the type “you remember for a lifetime”.

“We do it for [the Syrian] children that Asma told us about, and we do it for us too, for Italy, so that tomorrow we cannot say … that the Italians have abandoned their Syrian brothers,” Oppedisano said in an Italian-language report published in Il Primato Nazionale, a CasaPound-administered newspaper.

That report was authored by Alberto Palladino, a CasaPound activist who was convicted of a violent attack that left five Democratic Party activists hospitalised in 2011.

Asked if there was a contradiction between opposing the influx of Syrian refugees, most of whom were displaced by governmental forces, and supporting Assad, Di Stefano insisted: “They mostly flee from rebels and ISIL.”

According to a 2015 poll of nearly 900 Syrian refugees in Germany, more than half would return to their country if Assad quit.

Around 70 percent blamed the government for violence, while 31.5 percent pointed the finger at ISIL.

Guido Caldiron, a Rome-based journalist and author of Extreme Right, argues that CasaPound’s support for Assad stems from the group’s ideological roots: Authoritarianism, Islamophobia and the perception that the Syrian government has resisted Israel.

Since its inception, the Assad government has marketed itself as a bulwark of resistance against Israel.

Yet, the demarcation line between the Israeli-occupied Golan Heights and the rest of Syria was largely quiet between the 1973 Middle East War and the outbreak of Syria’s civil war nearly seven years ago.

“There is the fact that Assad is authoritarian and nationalist, and most of all it’s because [Assad] represents a non-religious world view, in their opinion,” he told Al Jazeera.

“Another thing is that they see Assad as anti-Israel and anti-Zionist.”

For CasaPound, the war in Syria is part of a larger assault by “globalists”, Caldiron added.

Leila al-Shami, a Syrian-British activist and co-author of Burning Country: Syrians in Revolution and War, explained that the far right’s relationship with Assad is rooted in the ideological overlap between European fascism and Baathism, the Syrian government’s founding ideology.

“There is definitely an overlap, and it works on two levels – the first is the ideological roots of Baathism, which definitely incorporates elements of fascism and extreme nationalism,” al-Shami told Al Jazeera.

Explaining that early Baathists “took inspiration from European fascism, particularly how to build a totalitarian state”, al-Shami argued that many neo-fascists also see the Assad government as “resisting Israel and Muslims alike”.

Meanwhile, the Assad government has seized the visits to “build legitimacy”, saying it has international support and that these visitors know there is a conspiracy against Syria, the author said.

Far-right groups in North America and Europe supporting Assad’s government is not a recent development.

In April 2017, American white supremacist Richard Spencer led an “anti-war” demonstration in Washington, DC, against the US bombing of a Syrian airbase.

Spencer is a leading figure in the “alt-right”, a loosely-knit coalition of white supremacists, white nationalists and neo-Nazis. 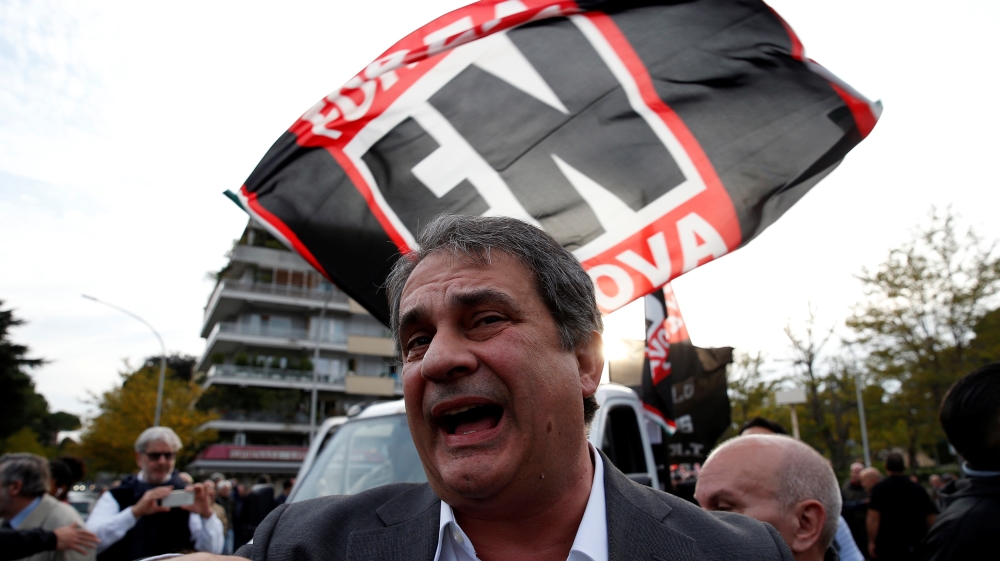 In October 2016, party leader Roberto Fiore, who fled Italy for several years in the 1980s after a police raid found a cache of weapons and explosives in his office, tweeted about his party’s alliance with the Syrian ruler.

“Forza Nuova defends Assad and the Syrian people against attacks by ISIS and the USA,” he wrote in a post accompanied by a photo depicting a group of Forza Nuova members raising a pro-Assad banner.

In 2013, the Greek far-right group Black Lily, a self-proclaimed national socialist organisation, claimed that it had sent fighters to Syria to support Assad’s forces and fighters from Hezbollah, the Lebanese political and military group aligned with the Syrian government.

That same year, Nick Griffin, formerly of the British National Party and a member of the European Parliament from 2009 until 2014, ventured to Damascus as part of an international delegation of far-right and ultranationalist politicians from across Europe.

Griffin returned to Syria again the following year for a conference organised by the Syrian Ministry of Justice.

Yet, the white supremacist alliance with the Syrian government predates the war.

In 2005, David Duke, former Grand Wizard of the Ku Klux Klan and notorious Holocaust denier, delivered a speech in Damascus on state television.

“It is only – in America and around the world – it is only the Zionists who want war rather than peace,” he declared to a crowd. 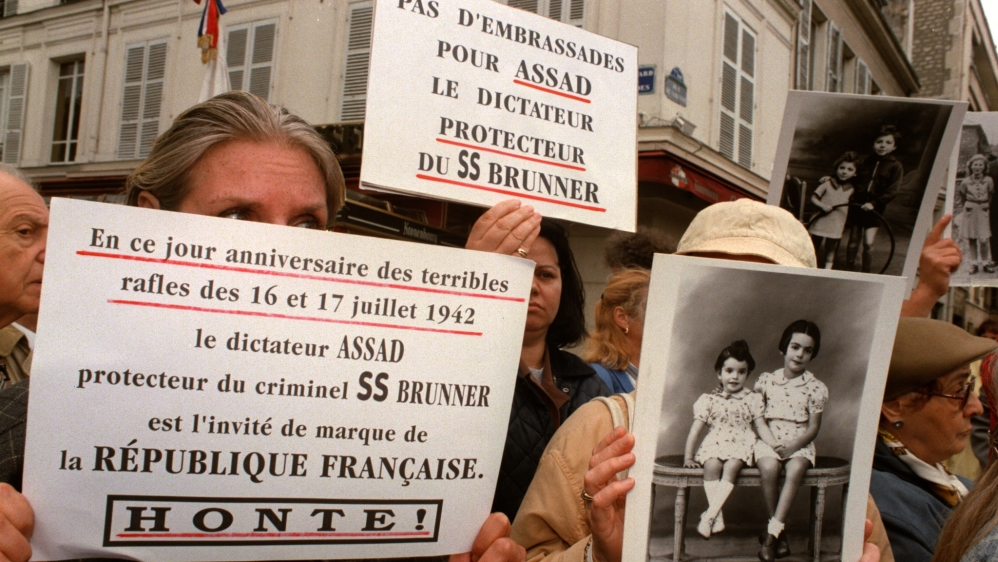 Further back still, German Nazi war criminal Alois Brunner was reportedly given safe haven in Syria, where he advised the government on torture tactics until eventually falling out of favour with Hafez al-Assad, the current president’s father and predecessor.

Brunner, who oversaw the deportation of 128,000 Jews to death camps during the Holocaust, was eventually detained and is believed to have died in custody in 2010.

Today, almost seven years into the Syrian civil war, there are no signs of the Assad-white supremacist alliance breaking down.

Back in CasaPound’s headquarters, Di Stefano defended government attacks when pressed on the issue of human rights violations, including government forces’ alleged use of barrel bombs in civilian areas.

“Even today, there are people taking up guns in the centre of the cities,” he said.

“What should Assad do? Shouldn’t he bomb those people? It’s a civil war, unfortunately.”