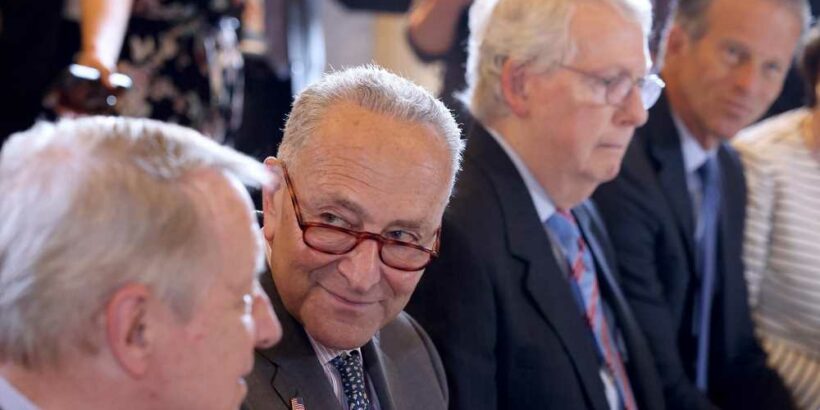 Some Republicans in Washington never seem to learn. At least 10 Republican senators say they have a deal with Democrats to do a smaller infrastructure bill than the one Joe Biden wants. That’s enough votes so that Democrats can pass the smaller plan through the Senate without using the budget-reconciliation process.

Democrats brought up a motion Wednesday to begin debate on the bill. All 50 Senate Republicans, even the people who back the deal, voted no. Why? Because the bill hasn’t been written yet. Nobody has even agreed on what will be in it. This isn’t a bill; it isn’t even a blog post. It’s barely even a Tweet.

What are Republicans getting in this deal for a bill to be named later? Usually, in a negotiation, both sides give something up. When the deal is on a tax or spending proposal, that usually means that one side comes up from the number it wants, and the other side comes down.

Either way, Democrats intend to pass $4.1 trillion in new spending, more than $32,000 for every household in the United States. They will do exactly the same thing with or without Republican help. And less than 1 percent of the spending is on infrastructure at all. Based on the White House’s own estimates, about $109 billion of the total spending is on “roads, bridges, and major projects” — the sorts of things people think of when you talk about infrastructure. We couldn’t spend $4 trillion on bridges if we tried; that’s more than a thousand times the cost of replacing the Tappan Zee Bridge.

All the Republicans are doing by agreeing to involve themselves in this charade is giving Democrats cover to pretend that the whole multi-trillion-dollar boondoggle is part of a bipartisan deal. If Democrats are going to do whatever they want anyway, why help them pretend otherwise?

Dan McLaughlin is a senior writer at National Review.