‘I’ve finally popped my clogs’: Widow, 91, writes her own death notice saying ‘it was time to go’ before she passes away to join ‘her late loving husband she has missed terribly for 25 years’

A 91-year-old woman has said goodbye to her friends and family by writing her own death notice, saying she had ‘finally popped her clogs’.

Jean Hedley said ‘it was time to go’ in the notice published after her death in Co Durham at the end of last month.

The much-loved fundraiser even penned a farewell to be read out at her funeral on Wednesday. 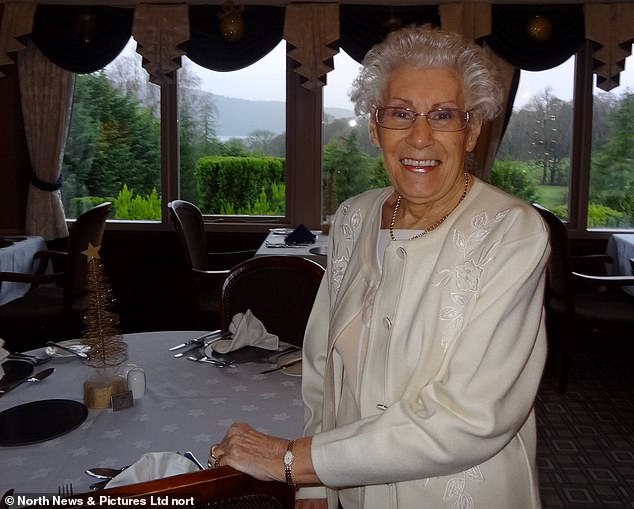 Jean Hedley (pictured), of Ferryhill, County Durham had prepared her death notice before she passed away, which contained an invite to her send-off at Durham Crematorium

The notice, inviting people to her funeral at Durham Crematorium, read: ‘Jean Hedley would like to say to all her loving family and friends that she has finally POPPED HER CLOGS and gone to be with Ted, her loving late husband who she has missed terribly for 25 years.

‘Don’t be sad, she was ready, it was time to go. There are to be no flowers, no tears, no sad poems or hymns.’

The death notice Jean Hedley, 91 and of Ferryhill, County Durham asked to be published in The Northern Echo. It appeared in the paper last week following her death on October 24

The notice, which was published in The Northern Echo, last week instead asked mourners to celebrate her life and achievements.

It read: ‘Only smiles, happy memories and pretty colours at her send off in Durham Crematorium.

‘Your love, support and kindness have been wonderful and I’ll miss you all. God bless, Jean.’

Mrs Hedley was born in Bishop Auckland in 1927, and later became a well-known community figure in Ferryhill.

Mrs Hedley lived in the Aycliffe Care Home, in Newton Aycliffe, at the end of her life.

Here she received more than 100 cards for her 91st birthday in May, which was testament to the number of people that admired her.

Her niece Pam Boland, paid tribute and comments to The Northern Echo, said: ‘She was the richest lady ever – family and friends rich, the best kind of rich.

‘Jean had a heart so big that it comfortably fit all of us in, it treasured each and every one and made us all feel special.’

During her life, Ms Hedley was a founder member of the Friends of Ferryhill Institute and helped raise thousands of pounds for local causes.

She also set up a line dancing class, which she ran for 20 years.

In her death notice, Ms Hedley asked for donations in lieu of flowers to the Dean Bank and Ferryhill Literary institute.