Boris Johnson is vehemently opposed to the expansion of Heathrow airport. And it seems his Brazilian sister-in-law Gabriela Maia has no need for a third runway either, as she could take flight all by herself in this feathered carnival costume.

The picture was posted online by her husband, Boris’ half-brother, Max, to mark her 29th birthday this week. ‘Happy Birthday to my beautiful angel Gabriela, my wife, my life, my love,’ he wrote.

The 33-year-old son of Stanley Johnson and his second wife, Jennifer Kidd, surprised his friends four months ago when he eloped with marketing manager Gabriela to Indonesia. The couple, below, live in Hong Kong, where Max runs a fitness company. 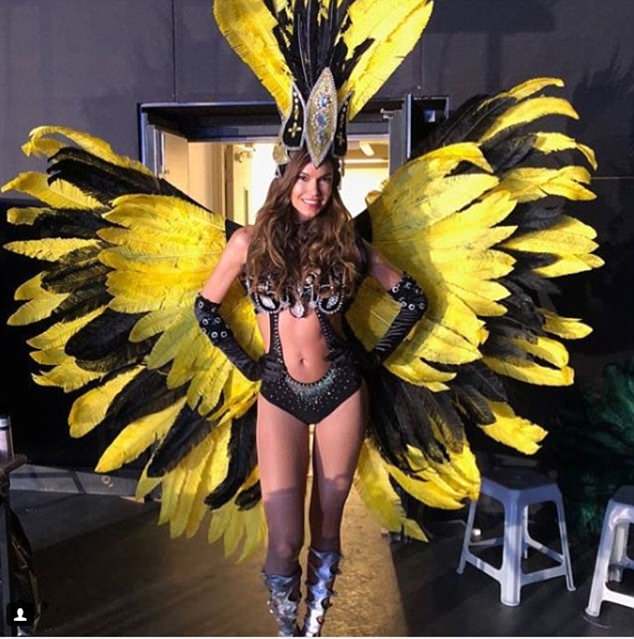 The picture was posted online by her husband, Boris’ half-brother, Max, to mark her 29th birthday this week. ‘Happy Birthday to my beautiful angel Gabriela, my wife, my life, my love,’ he wrote The 33-year-old son of Stanley Johnson and his second wife, Jennifer Kidd, surprised his friends four months ago when he eloped with marketing manager Gabriela to Indonesia

Colourful QC and scourge of warlords de Silva dies at 78

One of Britain’s most successful and entertaining QCs Sir Desmond de Silva, who was married to the Queen’s cousin Princess Katarina of Yugoslavia, has died aged 78 following heart surgery.

Sri-Lankan born Sir Desmond, who prosecuted some of the world’s most notorious war criminals, brought former Liberian president and warlord Charles Taylor to justice in The Hague. 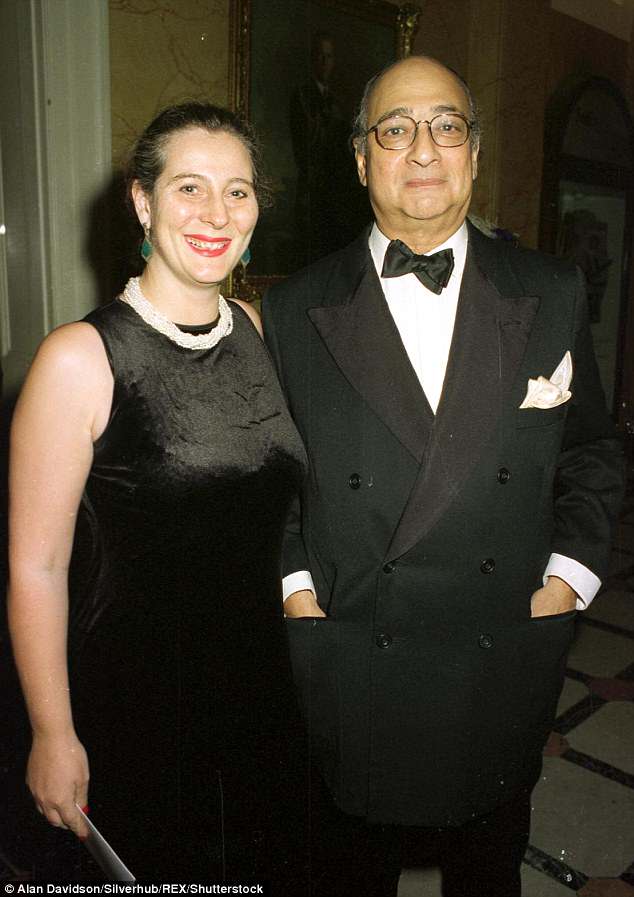 One of Britain’s most successful and entertaining QCs Sir Desmond de Silva, who was married to the Queen’s cousin Princess Katarina of Yugoslavia, has died aged 78

He married Katarina, who was 21 years his junior, in 1987, but they divorced in 2010 after he announced to her that she wasn’t intelligent enough for him. The couple have one daughter, Victoria.

Just last year he published his memoirs Madam, Where Are Your Mangoes?, and among the guests at the launch party was a man who once attempted to kill him.

His would-be assailant was landowner Daniel Chadwick, who drunkenly burst into de Silva’s bedroom at a country house weekend ‘with a sword in his extended hand’ after he mistakenly thought the lawyer was in bed with his girlfriend.

Sir Desmond, in fact, survived several attempts on his life and had his brandy poisoned during a trial in Africa. Yesterday his publisher Naim Attallah paid tribute to his author: ‘What Desmond has achieved is certainly the envy of many of us and is likely to dwarf anything we aspire to.’

He had a mischievous sense of humour, asking Lord Archer in an Old Bailey lift whether the author, on trial for perjury, was ‘going down’.

He was also fond of armagnac and threatened to sue a newspaper for reporting that he spent £400 a week on his favourite tipple. ‘Outrageous slur that damages my reputation,’ he griped. ‘I spend much more.’

Britain’s Got Talent bigwig Simon Cowell claims to be a top talent-spotter. But surely the biggest mistake of his career was passing on Kylie Minogue when the then Australian soap actress was offered to the record executive at a bargain price. ‘Every single label we went to passed on Kylie,’ recalls producer Pete Waterman. ‘Everybody said you couldn’t turn a TV star into a pop star, they flat-out refused. We offered I Should Be So Lucky to Simon Cowell for £500 and he turned us down. That’s why we had to start our PWL label — to put the records out.’ Perhaps Kylie was ultimately the lucky one.

‘There is a later period of his life I am looking at very closely, which I think would be an incredible companion piece,’ McCarten tells me at the film’s DVD release in Marylebone. ‘It has the same ingredients: a critical moment for the world and a story that can be told over a very few days.’

Fortunately, Gary Oldman, who won an Oscar for his role in the film, is up for a sequel — but says he needs a ‘couple of years off’ before putting on the fat suit and sitting through four hours of make-up each day again.

There’s a royal for hire! Prince Edward is offering to play you at real tennis if you donate at least £2,500 to the Duke of Edinburgh Award Scheme.

‘Throughout 2018 HRH the Earl of Wessex will seek to play every real tennis court in the world — to raise significant funds to enable more young people to start their DofE both in the UK and abroad,’ the Tennis & Rackets Association says.

But do you have to let Edward win?

Most university students spend their summers partying with pals, but Sir Paul McCartney’s grandson, Arthur Donald, is enjoying the company of his mum.

The 19-year-old, who was educated at £19,545-a-year University College School in North London before enrolling at £38,531-a-year Yale in the U.S., joined Macca’s daughter, Mary, at a charity do in Camden.

Dressed casually in a white T-shirt, black jacket and jeans, Arthur — the son of Mary’s first husband, film producer Alistair Donald — has not declared which career path he will pursue. When his grandfather was his age, he’d already formed The Beatles. 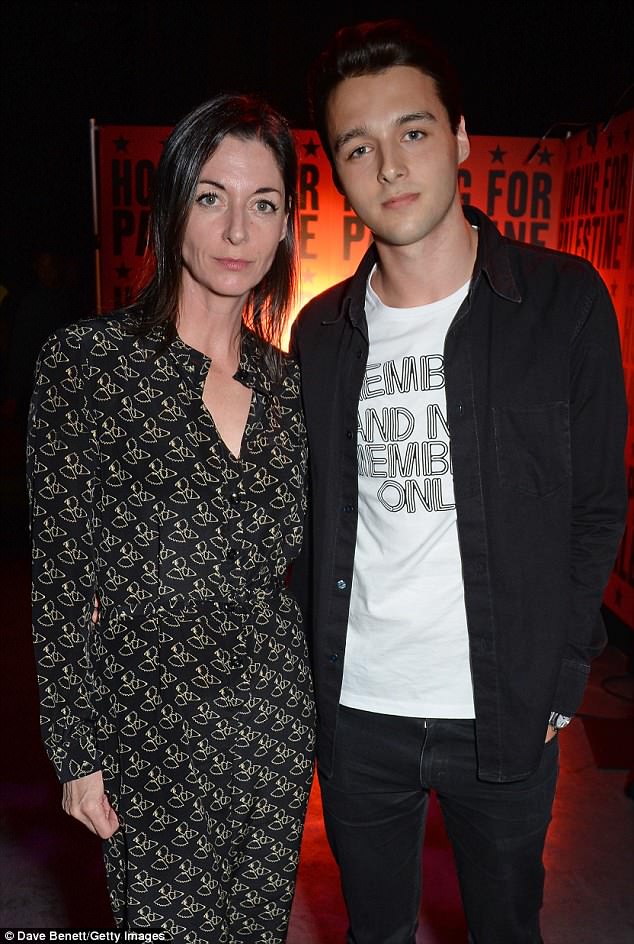 Most university students spend their summers partying with pals, but Sir Paul McCartney’s grandson, Arthur Donald, is enjoying the company of his mum

How grandson of Mick’s muse played for Stones

History came full circle after her 24-year-old grandson, Oscar Dunbar, was performing at London private members’ club Laylow, when Sir Mick walked in. After seeing Dunbar’s band The Khartoums on stage — and unaware of Oscar’s ancestry — Mick, 74, asked them to play at a Stones party being held at Laylow following the band’s recent stadium gigs in London.

‘Mick came in, heard us play and loved us,’ Oscar told me at the launch of Ruya restaurant in Grosvenor House, Mayfair. ‘He didn’t know who my granny was. I haven’t seen him since I was a baby.’ 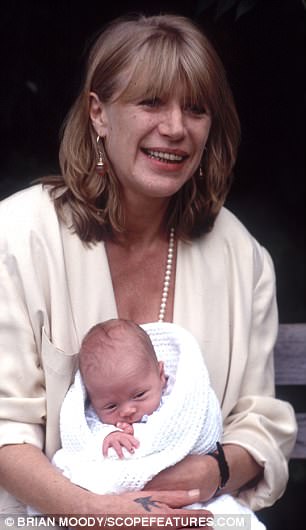 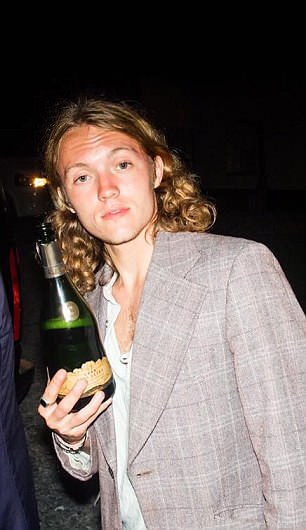