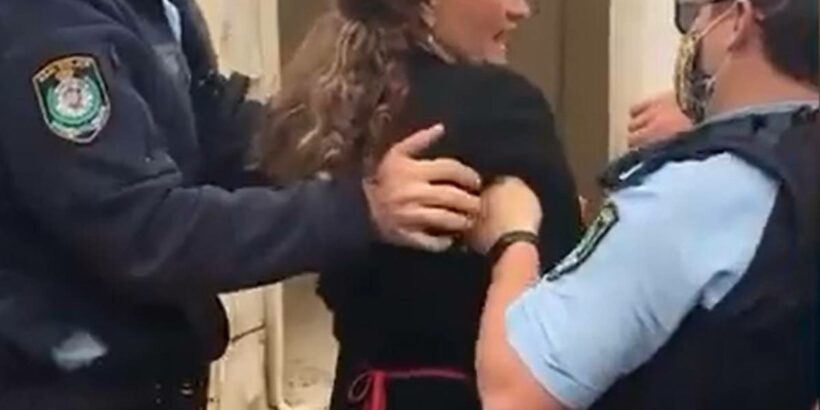 The owners of an organic grocery store in Australia have been arrested in a wild clash with police over their refusal to allow mask use inside their store for “hygiene reasons”.

New South Wales Police attended the store at Bowral in the NSW Southern Highlands just after midday yesterday after multiple reports from members of the public about non-compliance.

The store has posted its own footage of the intense scenes that followed.

It shows the store’s female owner being bundled into the back of a police van by two police officers.

When the male owner stepped in to object to her arrest, he was grabbed by officers, slammed into the back of the van and then wrestled to the ground.

The store’s Instagram page – which contains a number of anti-mask posts and others questioning Covid-19 vaccines – the owners claimed the drama had begun inside the store when police were called about the shop’s opposition to mask use.

This opposition can be seen in a sign outside the shop which claims masks are unhygienic, and states that customers who wear them won’t be served.

It also informs customers who have been vaccinated that they are not welcome for up to 10-14 days after their shot.

“For over 1.5 hours the police discussed this with owners,” the post said.

“A customer and a friend decided to film the discussion – that’s when it all kicked off. They refused to allow the filming and forcibly tried to remove her from the store.”

The owners accused an officer of putting her hands behind her back and pushing her from the store.

The video showed the male shopkeeper approaching officers as they tried to put the female owner into the police van, and he asked “what has she done?” as the officers warned him to “walk away”.

After the woman was pushed inside the van, the owner was immediately grabbed by an officer, to which he shouted “don’t touch me”.

Officers then pushed the owner against the back of the van with enough force to knock the cap from his head, and pushed a hand into his face.

They said they observed employees and customers not wearing masks and were told by those people that they did not plan to fall in line with the directive.

The 62-year-old was later released however the 61-year-old was issued with a $200 penalty infringement notice for not wearing a face covering in a place of business.

A man was also charged with assaulting police and resisting an officer in the execution of duty after he followed police outside.

He will appear in Moss Vale Local Court next month.