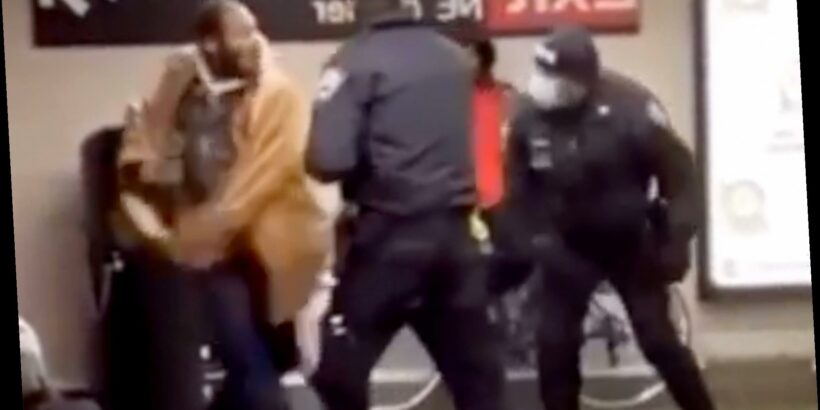 Man critically injured after jumping in front of Manhattan train

A pair of NYPD officers brawled with an apparent homeless man inside a Manhattan subway station in a wild scene caught on video.

The cops were at the Herald Square Station on Broadway and West 32nd Street around 2:30 p.m. Monday when they saw two people sleeping on the mezzanine, police said.

When they asked the duo to leave, one of the men, later identified as Perry Robinson, became aggressive and fought with them, police said.

The video, posted on Instagram, shows one of the officers grabbing for Robinson after he stands up from the floor and then appears to lean against a wall. Robinson, who is wearing a brown leather jacket, then tries to fight the cops and swings at one of them before falling down.

Both policemen then struggle to restrain Robinson as he’s on the ground, with one appearing to punch him in the face. The taller of the two cops loses his gun belt during the fracas and scrambles to put it back on as the man goes after the other cop, pinning him to the wall and repeatedly pummeling him, the video shows.

The struggle ends with Robinson getting handcuffed as the taller officer finally secures his gun belt. Two bystanders jump in by helping the cops restrain the perp.

Robinson, 43, was arrested for assault of a police officer, resisting arrest and obstruction of governmental administration, police said. Robinson is from Greensboro, North Carolina, and has no prior charges in the city, cops said.

One of the cops was bitten by the perp on his left forearm, the other suffered pain and bruising to his right knee, the sources said. The officers were taken to Lenox Hill Hospital for treatment.