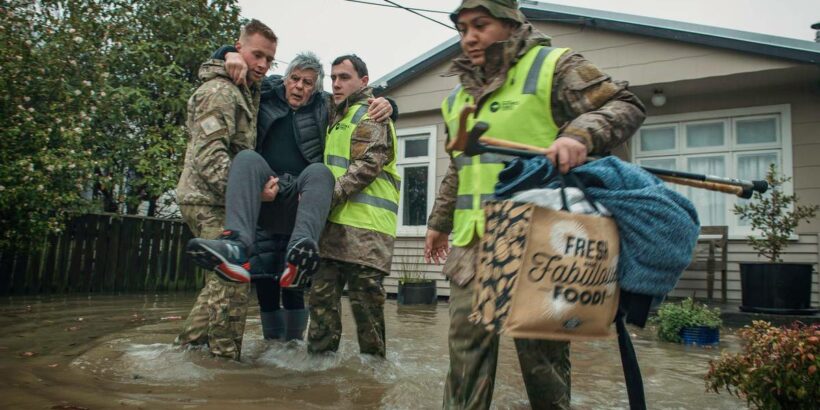 WEATHER LATEST
• Nelson, Westport, Picton, Murchison, Hanmer Springs and Golden Bay are isolated
• Buller and Marlborough have declared local states of emergency, as high river levels, flooding, fallen trees and slips close state highways across the top of the South Island
• 800 Westport residents evacuated on Friday night have been told they must remain out of their homes for a second night
• Marlborough Emergency Management has evacuated four areas – all of Spring Creek township, Tuamarina township, part of the Lower Wairau and Lower Terrace in Renwick

Residents in Westport have been told to conserve and boil water – and try to stay put – as officials survey the damage wreaked by one-in-100 year floods this weekend.

Thousands of people acriss the West Coast and Marlborough had been forced to evacuate flooded properties, while roads and highways remain closed after wild weather thumped the centre of the country.

And although a “code red” weather warning was officially lifted this morning, more heavy rain was expected today.

“We know you are keen to get home, however, due to the risk of floodwater contamination and the potential for electrical hazards, we advise you to stay where you are,” the Buller Distrrict Council said in an alert at 8.30am.

As well as being asked to conserve water, the council said residents should boil water as a precaution. “A boil water notice means you need to boil or treat all water from taps/tankers before drinking, brushing teeth or using in food preparation – bringing water to a rolling boil is sufficient to kill bugs.”

Evacuations began in Buller, on the South Island’s West Coast, on Friday night, when more than 820 people were told to evacuate as heavy rain caused rivers and streams to rise.

Yesterday, evacuations continued – in Westport in the Buller District, Riwaka in Tasman District and in Renwick and several rural communities home to several hundred people between Blenheim and Picton in Marlborough District.

Deputy mayor Nadine Taylor declared a state of emergency in Marlborough at 12.20pm.

Late last night West Coast Civil Defence told anyone in Westport who hadn’t yet evacuated to “shelter in place” and call 111 if lives were at risk.

Flood levels in Buller, where a rare “red warning” was issued by MetService on Friday reached their highest level since 1926 at the Buller Te Kuha monitoring station.

The warning was downgraded to orange last night.

Roads out of Westport were cut off yesterday, although the bridges over the Buller and Orowaiti Rivers had reopened this morning.

“Westport is an island at the moment,” Buller mayor Jamie Cleine, who earlier described the event as “at least a 50-year flood event”, told 1 News. “I’ve never seen anything like it.”

Niwa tweeted at 7pm that the Buller River level was just below 12.4 metres, down from its peak earlier in the day of 12.8m.

Floodwaters proved dangerous for some, with several motorists rescued from stranded vehicles, including five people in two vehicles at Tuamarina, north of Blenheim.

A front-loader helped others, and a person was plucked from the roof of a flood waters-surrounded campervanby helicopter at Woodstock in Tasman district’s Motueka Valley.

Meanwhile, in Hunterville, north of Palmerston North, two were hurt – one seriously, one moderately – when a tree fell on their car at 4pm, trapping them.

Fire and Emergency cut the pair out and they were taken by St John Ambulance to Whanganui.

Although the worst of the weather was in the upper South Island, other parts of the country didn’t escape the mid-winter blast.

Heavy winds battered Taranaki, where at least one trampoline took flight and those posting to the Extreme Weather Taranaki Facebook page reported shaking windows, a porch being blown out and waves crashing over a rock wall at Port Taranaki.

“When is this wild weather due to go away? Feels like my house is going to blow away,” wrote one.

In Wellington, roofs were ripped off overnight yesterday and by midday Wellington City Council had received “more than 20 calls to reports of flooding on roads and into private properties”, as well as shops in Berhampore.

Three state highways were closed because of flooding, and others had lanes blocked.

Owner Yvonne Denton said last night the “treasured family horse” had been checked by a vet and was doing well in a neighbour’s stable, but they had to watch for pneumonia as the 21-year-old Cleveland Bay X had water in his lungs.

“His head was under water [when Duncan arrived]. She jumped the fence and literally pulled his head out of the water. I can’t thank everybody involved enough.”

It also wasn’t a good day for travel yesterday.

As well as closed roads and highways, some ferry services in Auckland were cancelled and 28 domestic flights disrupted.

In the worst affected areas – Marlborough, Nelson, Westland and Buller – periods of heavy rain, with heavy falls and thunderstorms, would ease this morning, MetService said.

EVACUATED TOWNS:
• Westport, with those still home told to shelter in place