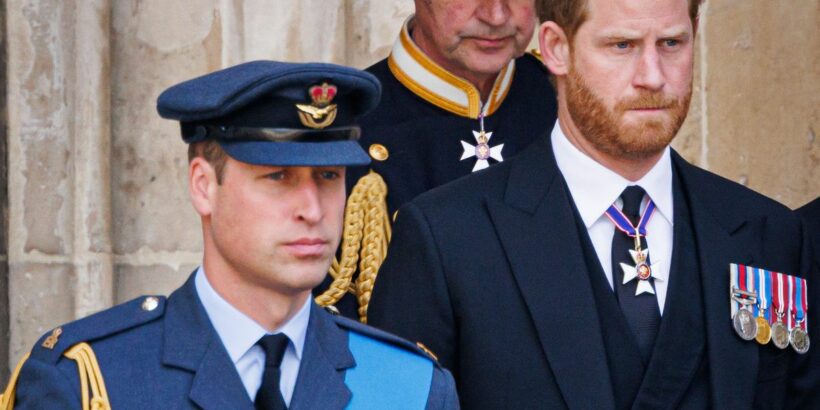 William and Harry's feud truce "will remain until memoir is published" as "distrust remains" with the princes, royal insiders say.

Their relationship hangs in the balance, despite the public displays of unity with their wives following the Queen's death.

During a solemn procession from Buckingham Palace to ­Westminster Hall last week, the Prince of Wales and the Duke of Sussex stood shoulder to shoulder as they guided Her Majesty on a final journey before her lying in state.

But in a striking picture taken on the day of the Queen’s funeral, the divisions in the family were still apparent as Prince Harry and his disgraced uncle Prince Andrew walked on the outside of the King and his heir.

Despite the family coming together to honour the late monarch, including two vigils by the Queen’s children and grandchildren, insiders have revealed their ­relationship with the rest of The Firm still remains fractured beyond repair.

Royal sources have revealed that regardless of the display of harmony between the former “Fab Four” of the brothers and their wives, the princes did not plan to meet throughout Harry’s time in the UK.

William, 40, and Harry, 38, reportedly had just one meeting last Thursday when they shared a brief chance encounter.

The Prince of Wales was returning to Windsor after collecting his ­children Prince George, Princess Charlotte and Prince Louis from school.

Harry and Meghan, 41, were in their car as the brothers drove past each other, but then stopped, reversed, wound down their windows and chatted, according to the Sunday Times.

One royal insider said: “The family continue to be in mourning and are now finally being allowed to grieve for the Queen away from the gaze of millions.

“However, any talk of a truce between the Prince and the Duke would only be temporary.

“There is still a serious amount of distrust in the air and there hasn’t been any cause for that to change."

The Duke of Sussex’s memoir, which was due to be released in December, is set to be delayed until next year because of the royal mourning period.

Senior royals including the King and Prince William are said to be ­“increasingly uneasy” about the content of the book.

Harry and Meghan were yesterday preparing to fly back to California to be reunited with their two children, Archie, three, and one-year-old daughter Lilibet.

Sources have said the Princess of Wales and Meghan were “not known” to have exchanged words throughout the whole period the Sussexes were in the UK.

Royal watchers had been hopeful of a resolution between the two brothers when they reunited in grief to pay tribute to their beloved­ grandmother last week.

In a moving scene reminiscent of past happier times for these once ­inseparable siblings, the images of the Prince of Wales and Duke of Sussex once more standing beside one another warmed a nation grieving for their lost Queen.

Sources, however, suggested any hint of a rapprochement between the couples was “very unlikely”.