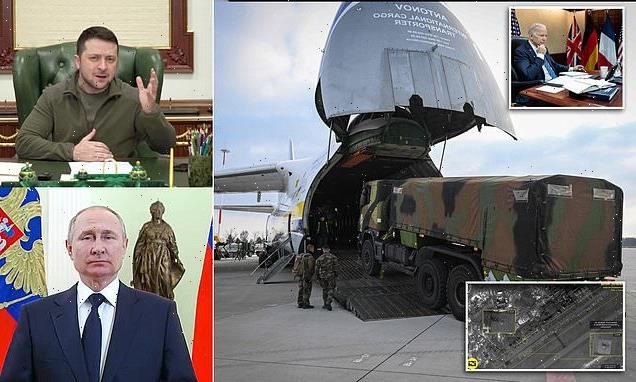 Will Putin strike Poland? Senior US officials are concerned Russia may attack a supply line to Ukraine inside a NATO nation using long range artillery to stop 17,000 vital anti-tank missiles being delivered to Kyiv

The United States and its allies were on Monday night engaged in a race against time to get weapons into Ukraine, amid growing concern that Russia may try and cut off the weapons pipeline.

Images of NATO aircraft unloading near the border with the embattled neighbor have been shared widely by political leaders and on social media, and General Mark Milley, the chairman of the joint chief of staff, was on Sunday touring ‘secret’ airfields to witness the transportation.

The U.S. and its allies have delivered 17,000 anti-tank missiles to Ukraine so far, and two days after the conflict erupted the White House approved a $350 million package of military support.

Yet on Monday a senior official told ABC News there are indications Russia may attack one of those supply chains in Poland before it gets to Ukraine.

Vladimir Putin could potentially use air power to stop the flow, ABC reported.

Russian troops and equipment have for months been building on the border with Ukraine, with satellite images showing heavily fortified areas being created, from which to launch long-range artillery.

The supply lines could be attacked from a distance, officials believe. 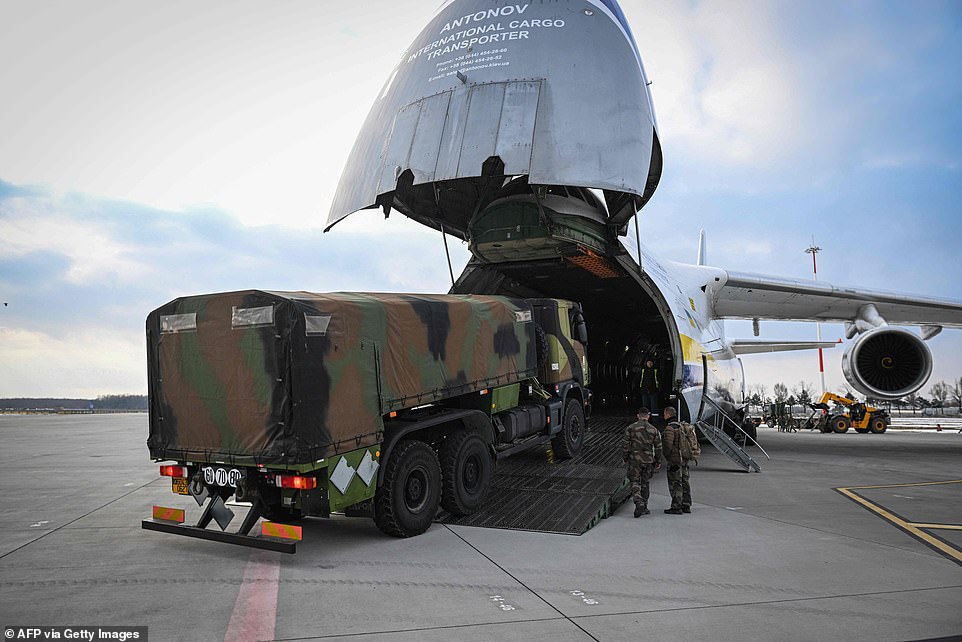 Military equipment from the French army is loaded from an Antonov 124 freight airplane, at Mihail Kogalniceanu Air Base near Constanta, Romania, on Friday 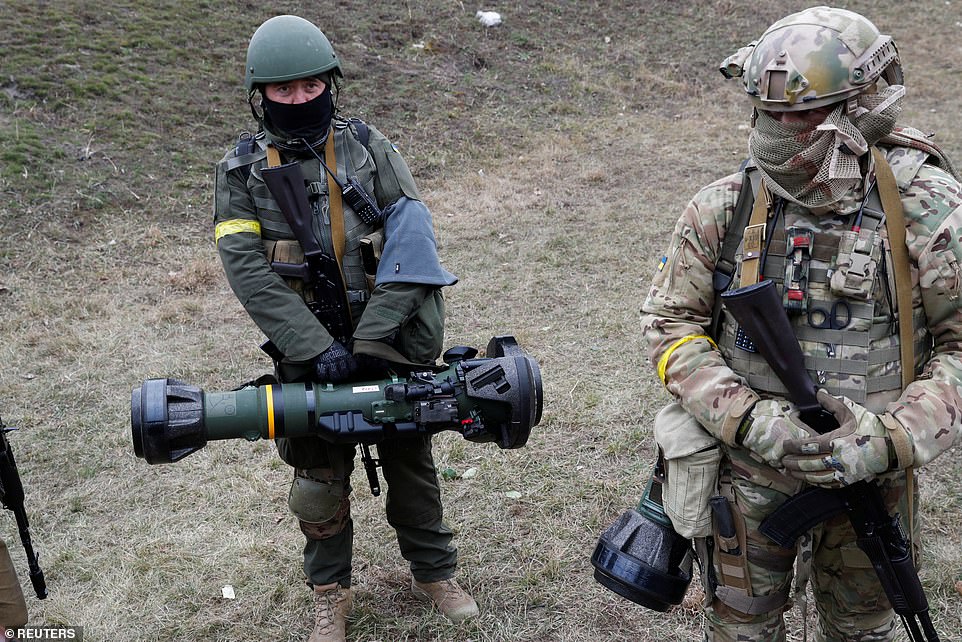 A Ukrainian soldier is pictured on Sunday holding a NLAW – Next generation Light Anti-tank Weapon – while manning a checkpoint on the outskirts of Kyiv. NATO has so far sent 17,000 anti-tank weapons to Ukraine 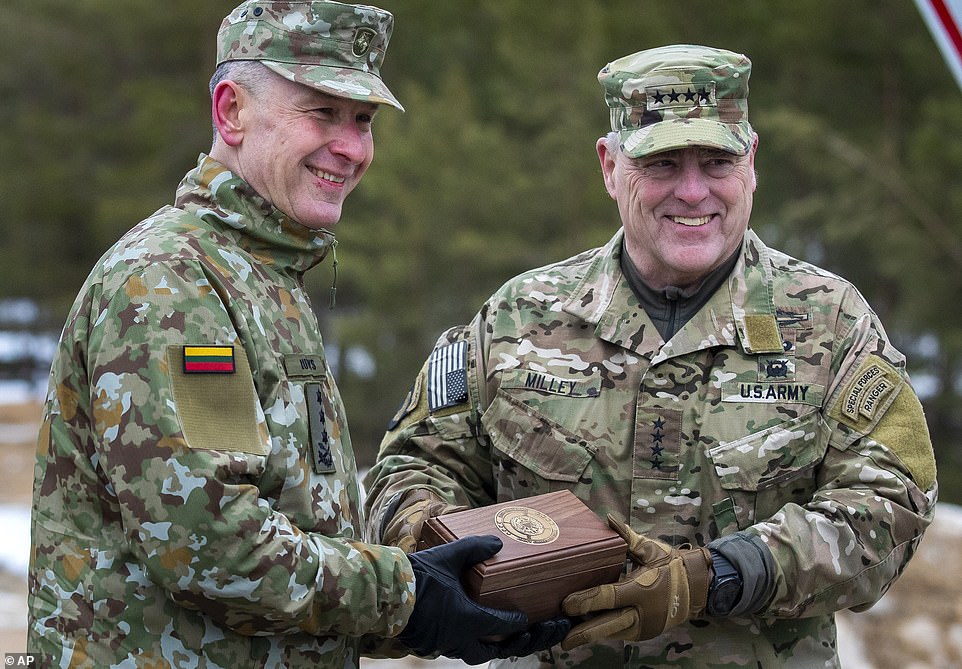 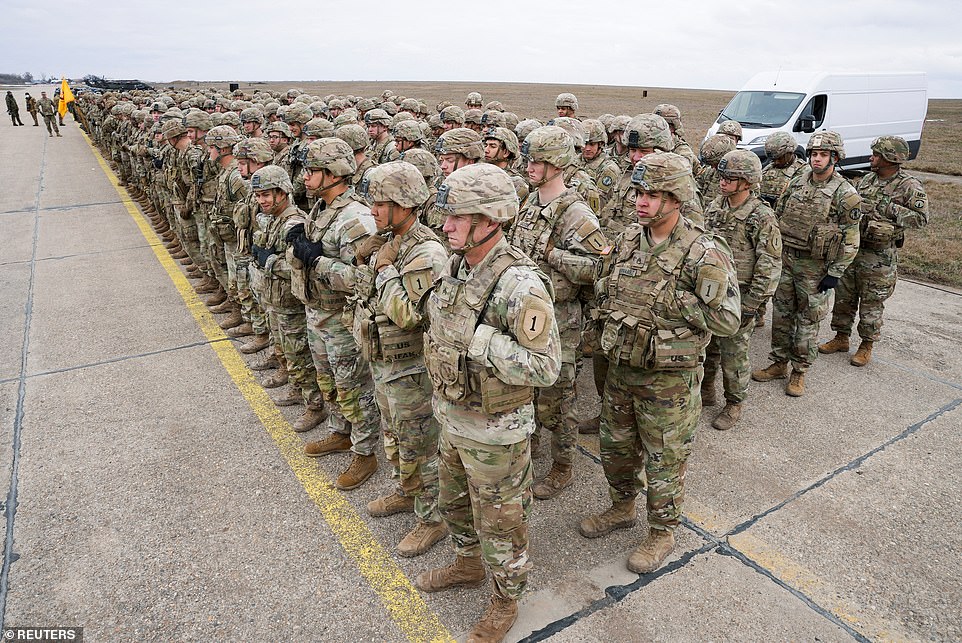 U.S. troops are seen on Sunday at the Mihail Kogalniceanu Air Base near Constanta, Romania 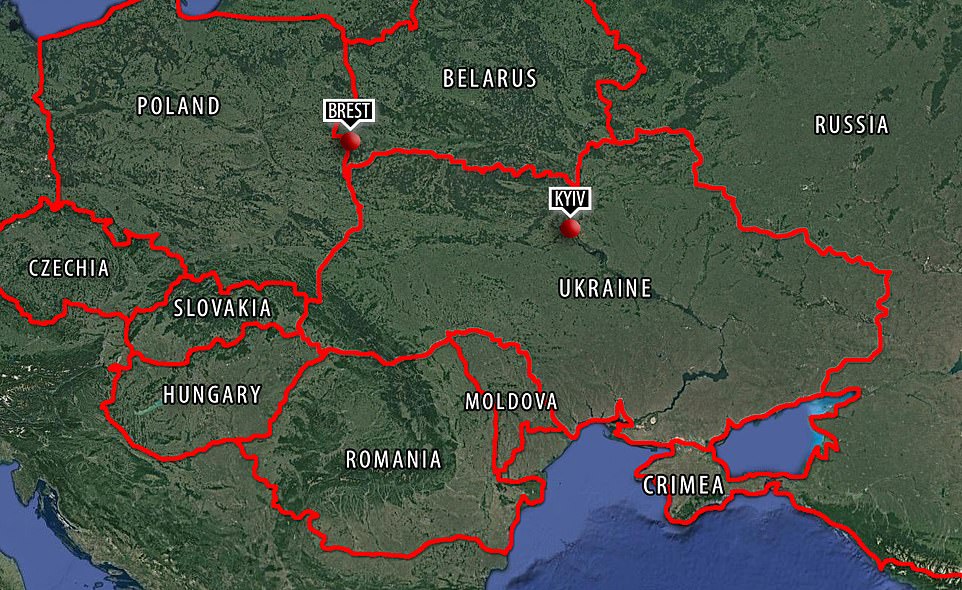 Russian troops and artillery were seen in Brest, on the border of Poland and Belarus, in what analysts fear could be a potential source of a strike on supply lines 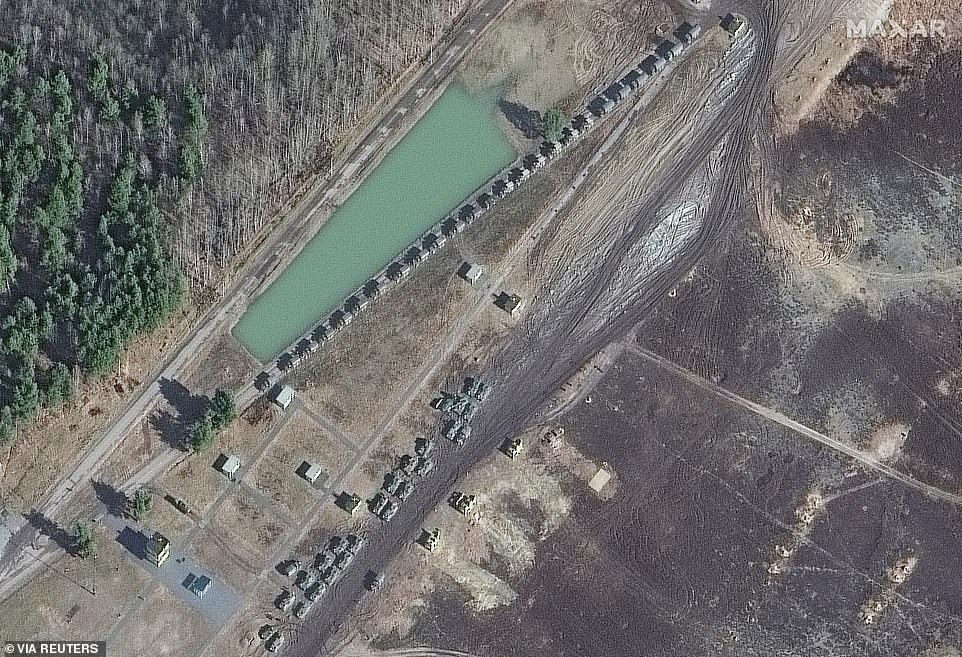 Ukrainians have seen success in attacking Russian resupply areas, mostly in the north but also among smaller, moving groups.

On Friday, a defense official told reporters the weapons were getting into Ukraine through ‘multiple venues,’ without elaborating.

‘There are multiple venues through which the support is getting to the Ukrainians on the ground,’ they said, according to The Hill.

‘I really don’t want to get more specific than that. We want to be able to continue to help the Ukrainians as much and for as long as we can, so we’re going to be very careful about how we talk about how that support is getting into their hands.’

Russia has in recent days ramped up its rhetoric warning the West against further involvement, in a sign that Putin’s patience with the conflict could be wearing thin.

The Russian leader is widely said to have anticipated a rapid takeover of Ukraine, and to be angered by the pace of the invasion – entering on Tuesday its 13th day.

With the U.S. and its allies openly channelling weapons to the war, and with Ukrainians using the donated weapons to great effect, Russia has warned against further entanglement.

Igor Konashenkov, a spokesman for Russia’s defense ministry, said in a video briefing on Sunday that some Ukrainian combat planes had redeployed to Romania and other neighboring countries – and warned against attacks being launched from there.

‘The use of the airfield network of these countries for basing Ukrainian military aviation, with the subsequent use of force against Russia’s army, can be regarded as the involvement of these states in an armed conflict,’ he said. 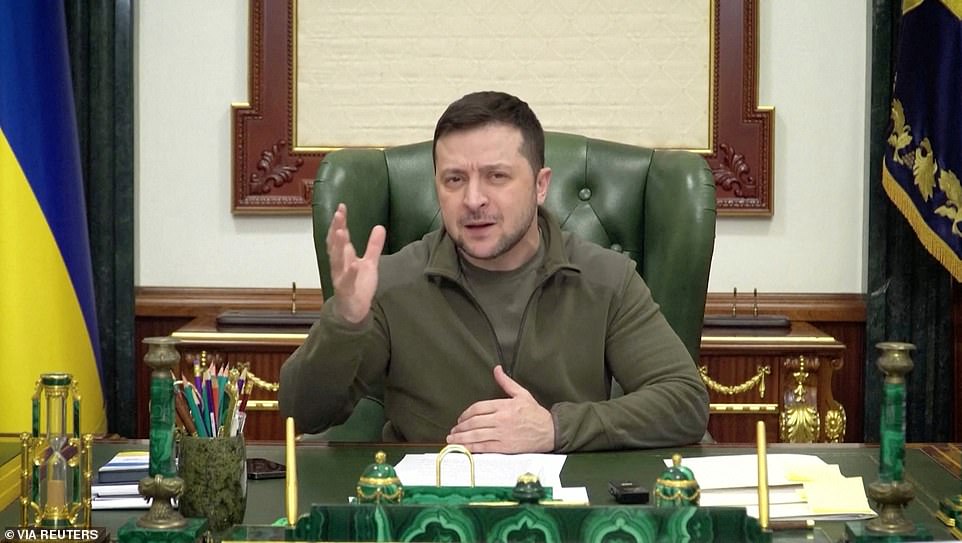 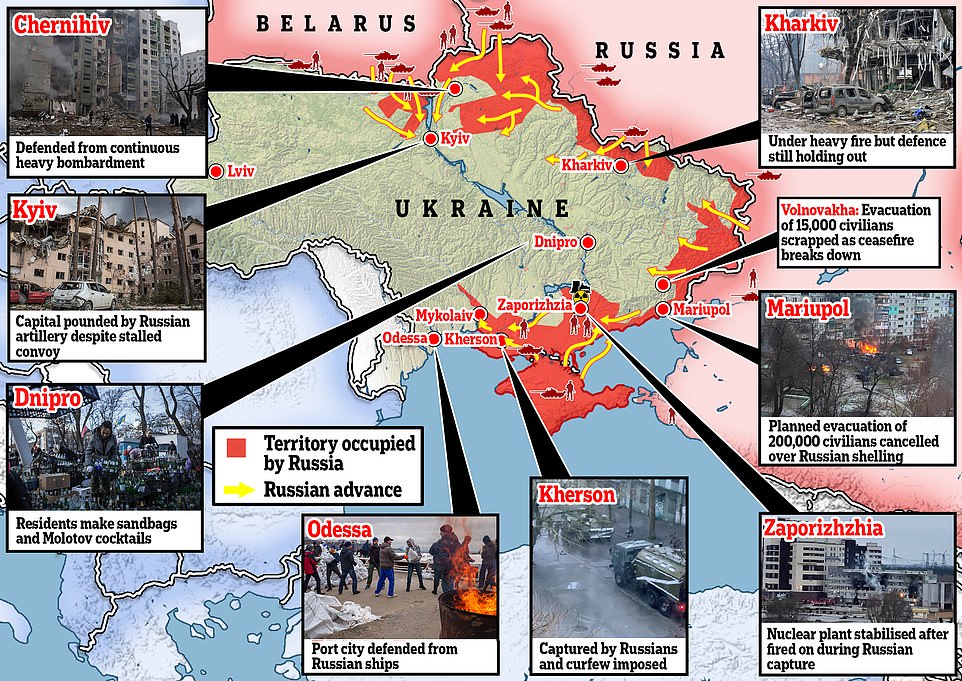 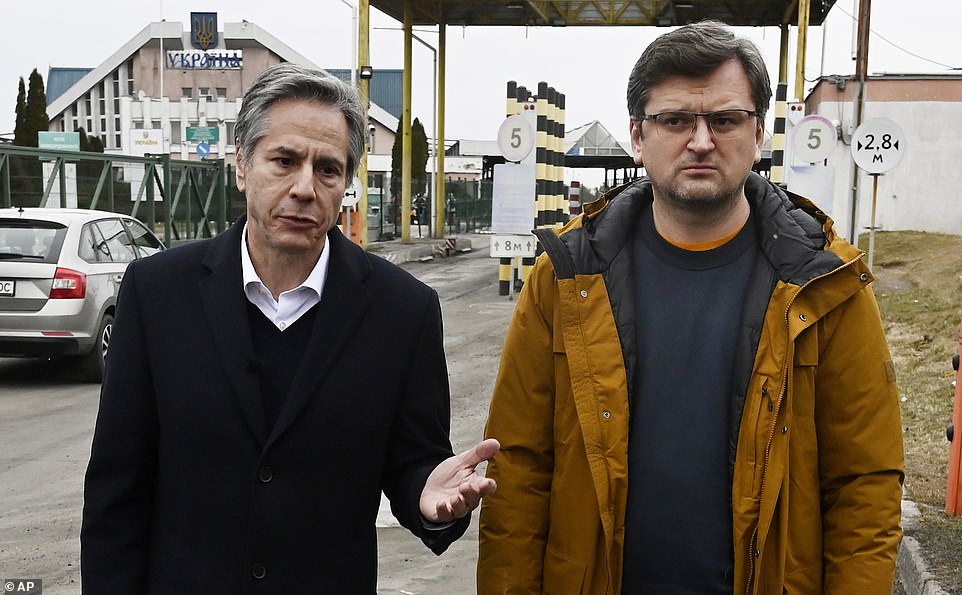 Antony Blinken, the U.S. Secretary of State, is seen on Saturday on the Ukraine-Poland border with his Ukrainian counterpart, Dmytro Kuleba 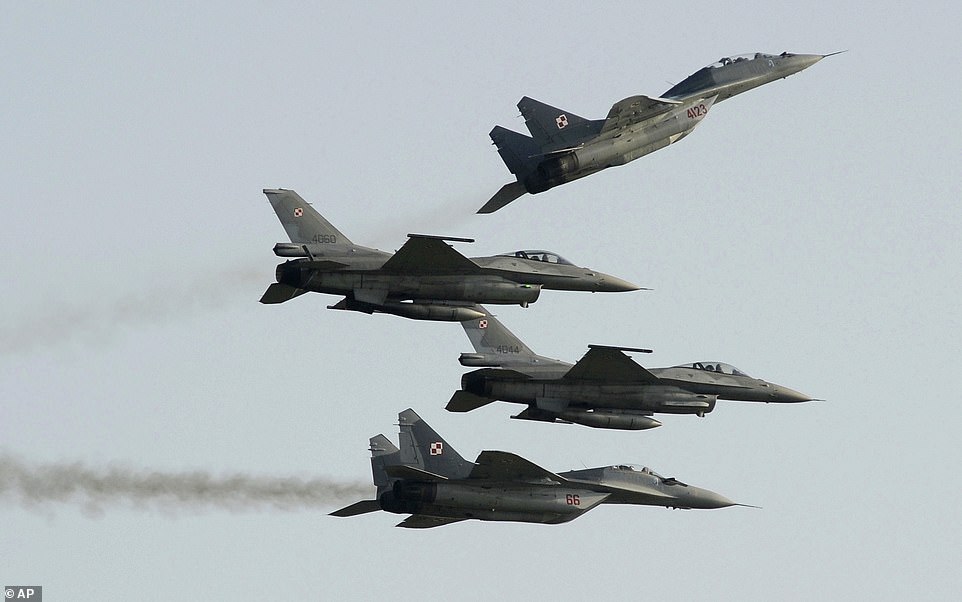 Two Polish Air Force Russian-made MIGs 29’s fly above and below two Polish Air Force U.S. made F-16’s fighter jets, at an air show in 2011. The U.S. has approved Poland sending its MIGs to Ukraine, but Poland is reluctant to do so, fearing an escalation of hostilities

Poland on Sunday was told by Antony Blinken, the Secretary of State, that they had the ‘green light’ to send MIGs to Ukraine.

Under the scheme, Poland would give Ukraine its MIG fighter jets, which Ukrainian pilots are trained to fly.

In return, the U.S. would replace the Soviet-era planes with modern F-16 American fighter jets.

Poland, however, quickly said that they had not agreed any plan.

Poland’s president, Andrzej Duda, has repeatedly voiced concern about the proposal, believing it would drag his country into open conflict with Russia.

Zelensky on Monday said that the plan had indeed been discussed, but the decision lay largely with the U.S.

‘We asked not only the United States, we asked many other countries – I’m not going to name them,’ he said.

‘We looked into this question. We know where these Soviet planes are stationed, which countries host them. And we asked these countries.

‘And in many ways, it is the United States who will decide.’

U.S. officials appeared on Monday to be cooling on the idea – potentially in the face of Russian reprisals.

Jen Psaki, the White House press secretary, said on Monday the administration is not opposing such a deal, but said there are significant logistical challenges.

‘It is not as easy as just moving planes around,’ Psaki said.

Pentagon spokesman John Kirby sought to temper expectations as well, telling reporters ‘we’re very early on in a discussion here about what the possibility could’ and it’s ‘not a done deal at this point.’

Were Russia to attempt to stop the flow, it could well try and use the long-range missiles positioned in Belarus – a pariah state sharing long borders with NATO members Latvia, Lithuania and Poland. 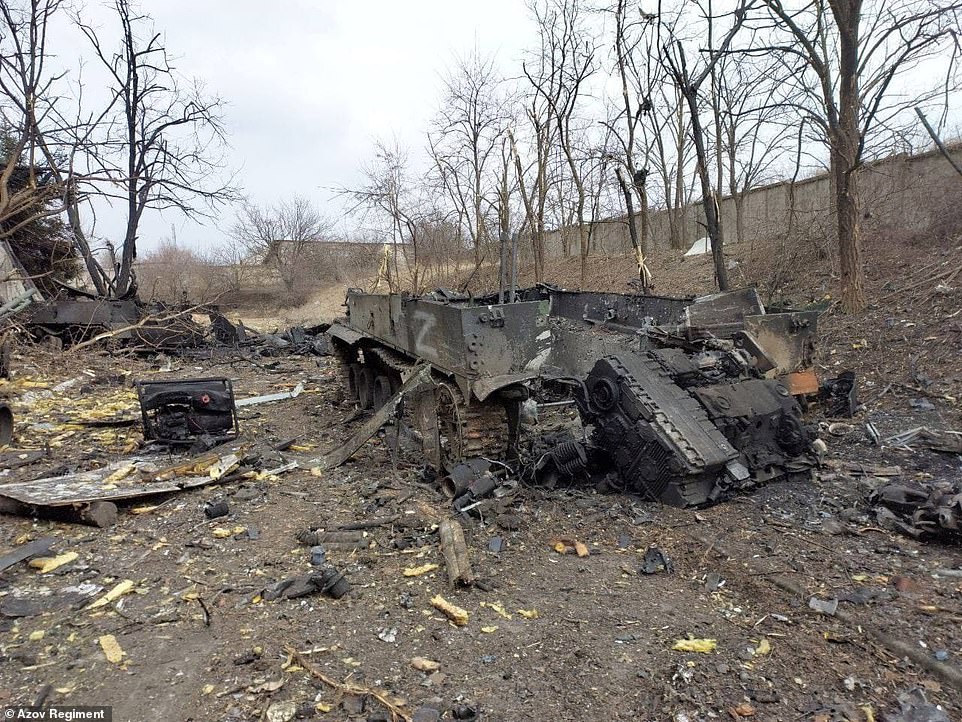 Destroyed Russian vehicles are seen somewhere near Mariupol, in images captured by the Azov Brigade 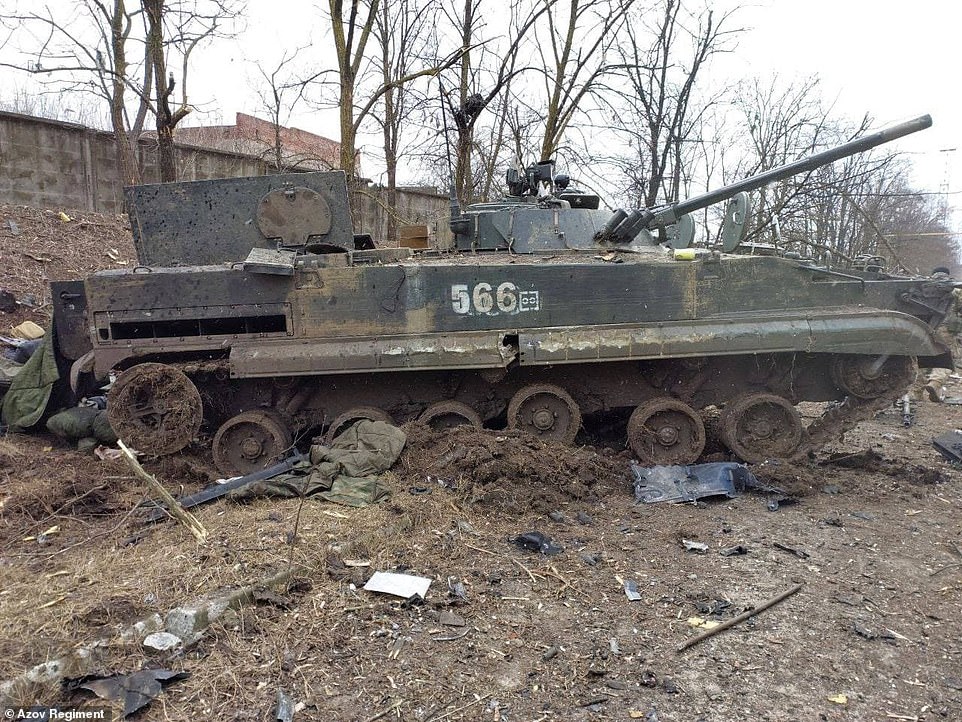 A destroyed Russian infantry fighting vehicle is seen near the city of Mariupol, in images captured by Ukraine’s ‘Azov Brigade’ 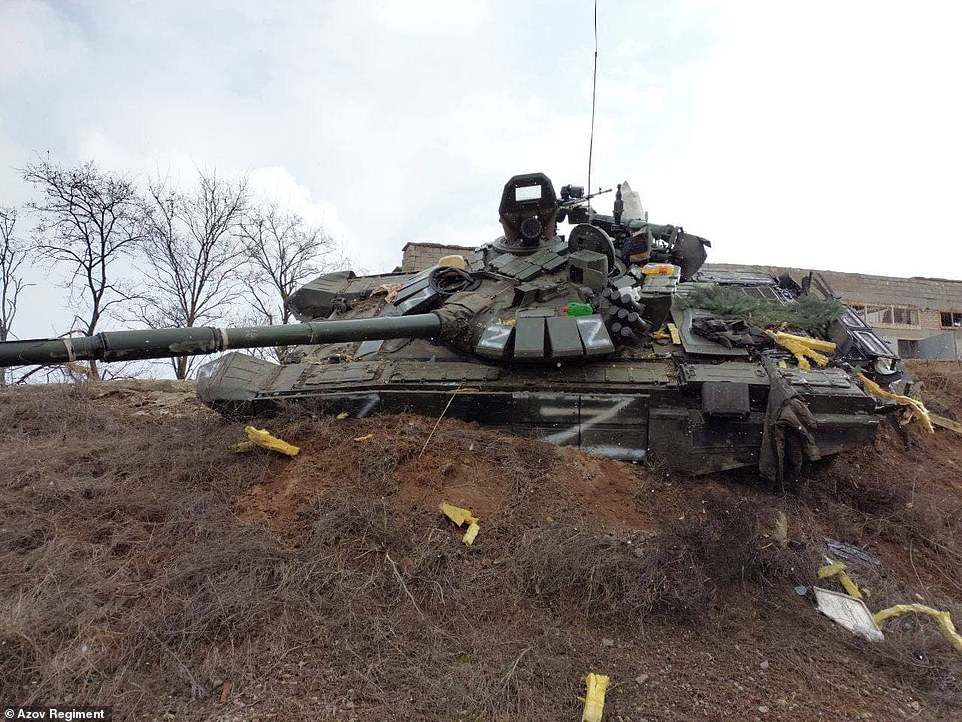 A Russian tank is seen damaged and abandoned near the city of Mariupol, which has been under heavy shelling for days 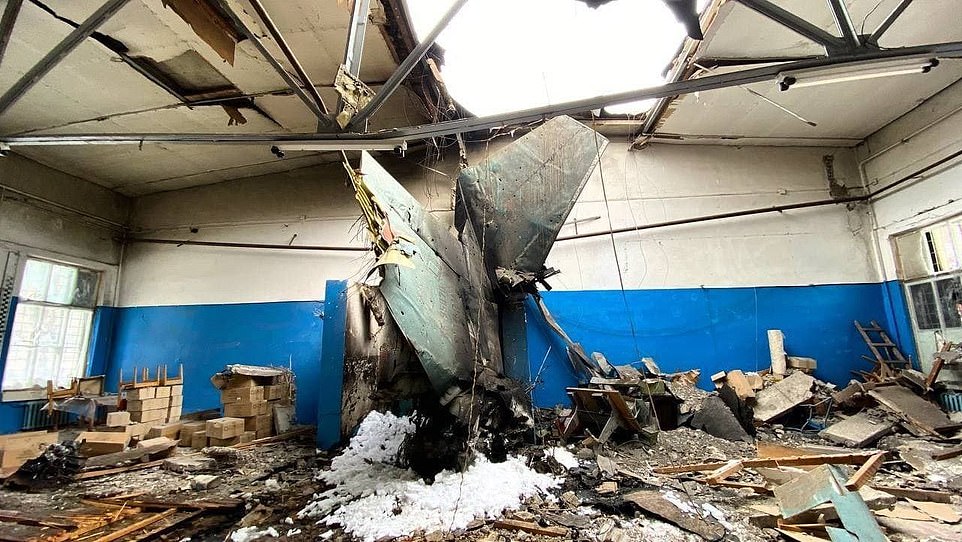 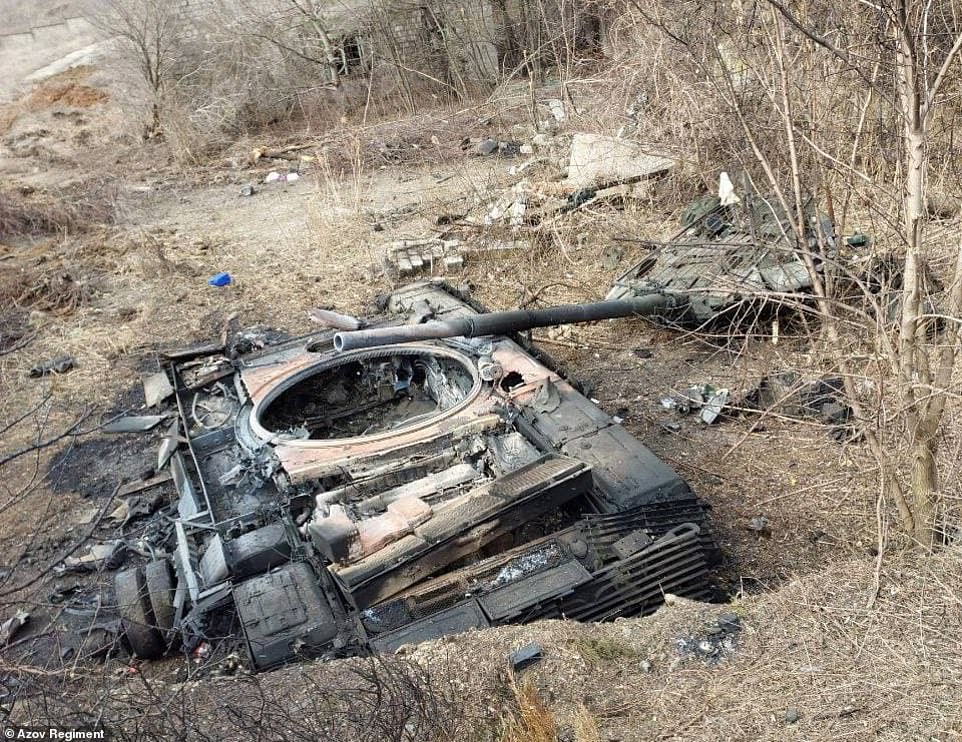 A Russian T-72 tank is seen destroyed somewhere near the city of Mariupol in an image posted by the ‘Azov Brigade’, a unit of the Ukrainian National Guard that operates in and around the city

The massive buildup was spotted in the Belarus city of Brest, just 10 miles east of the the Polish border.

‘Russia has also added more equipment at a nearby railyard in Belarus.’

Blinken was asked by ABC News on Thursday night whether he felt the Russian president would recall his forces once Ukraine was conquered.

‘Is it a possibility that Putin goes beyond Ukraine? Sure, it’s a possibility,’ Blinken told host David Muir.

But he stressed that progressing beyond Ukraine into neighboring Poland, Slovakia, Hungary or Romania would mean invading a NATO member country, and would automatically draw in the US, UK, France, Canada and the other nations that form the 30-country alliance.

‘There is something very powerful standing in the way of that, and it’s something we call Article Five,’ said Blinken. 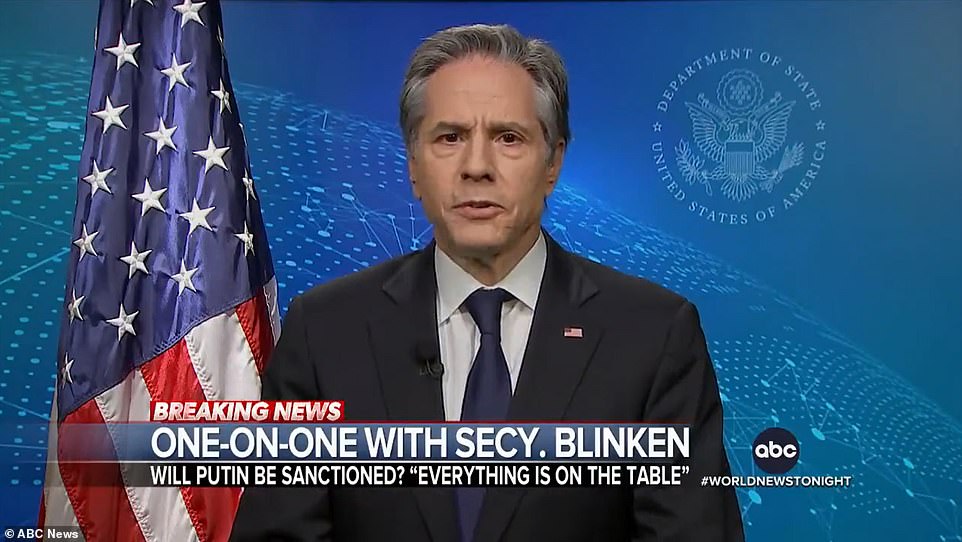 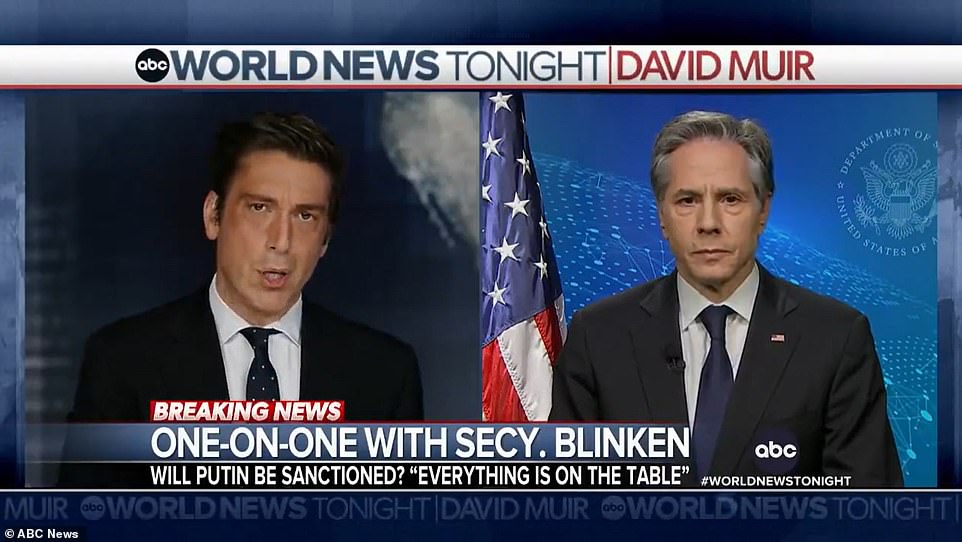 Blinken was asked by ABC News on Thursday night whether he felt the Russian president would recall his forces once Ukraine was conquered. ‘Is it a possibility that Putin goes beyond Ukraine? Sure, it’s a possibility,’ Blinken told host David Muir

‘The president has been very clear that we will defend every inch of NATO territory.’

Blinken said he believed this would be the ‘most powerful deterrent’ against Putin taking his artillery beyond Ukraine.

However, Blinken remains certain Putin will try to bring about regime change in Ukraine.

‘I’m convinced he’s going to try to do that.’

Blinken added that he felt that whatever happened, ‘democracy and the independence of Ukraine will prevail’ regardless of what happens in the fighting.