Will it rain on Prince Harry and Meghan Markle’s big day? Forecasters predict showers will hold off until at least next SUNDAY – but there’s a one in eight chance it could come sooner

It’s one of the most anticipated events of the year, and royal aides have spent months planning every tiny detail.

But one thing that can’t be organised in advance of Prince Harry and Meghan Markle’s wedding at Windsor Castle in Berkshire next Saturday is the weather – with the royal family and their fans hoping for clear skies and sunshine.

However, good news is on the horizon, with forecasters’ early predictions suggest showers will hold off for the big day on May 19 – with only a 12 per cent chance of downpours, and temperatures of 66F (19C) expected.

Before then, Britain is preparing for a cooler weekend as temperatures only make it to 64F (18C), just a week after they hit a sweltering 84F (29C), and there is a chance of showers along with some hail and even thunder. The Coaching Marathon travels along the Long Walk at the Royal Windsor Horse Show today, one week before the wedding 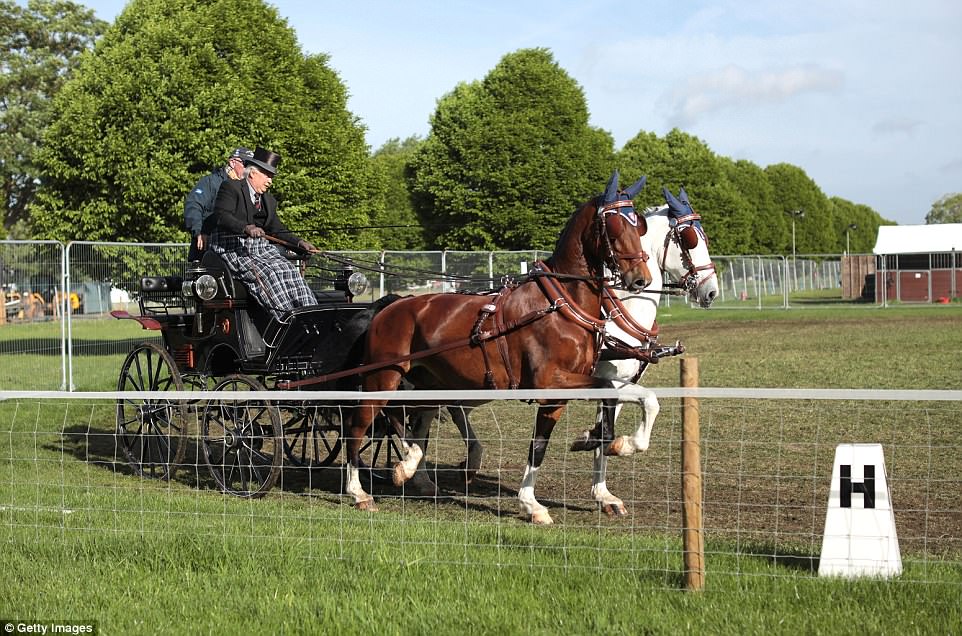 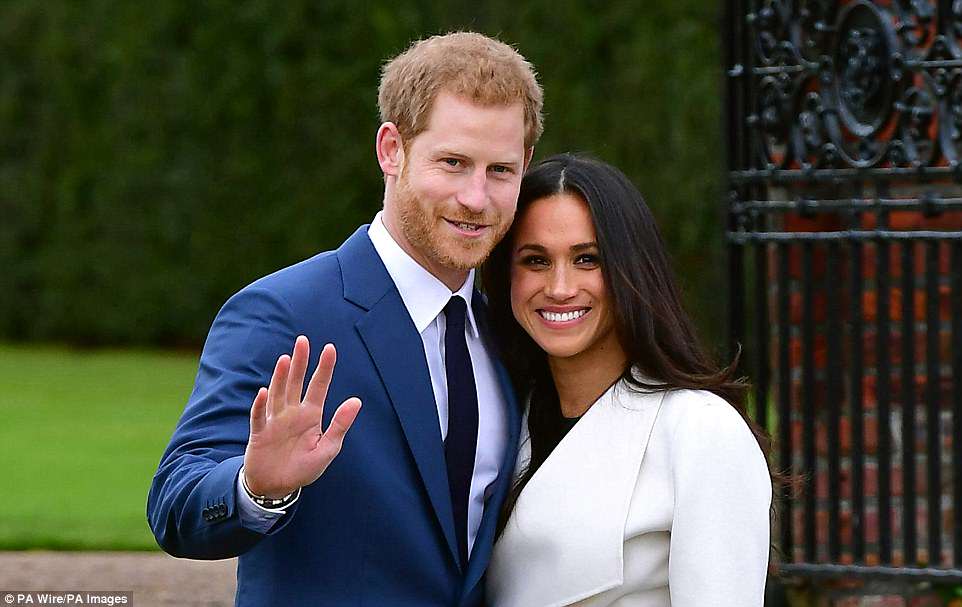 Prince Harry and Meghan Markle at Kensington Palace in London, after their engagement was announced last November 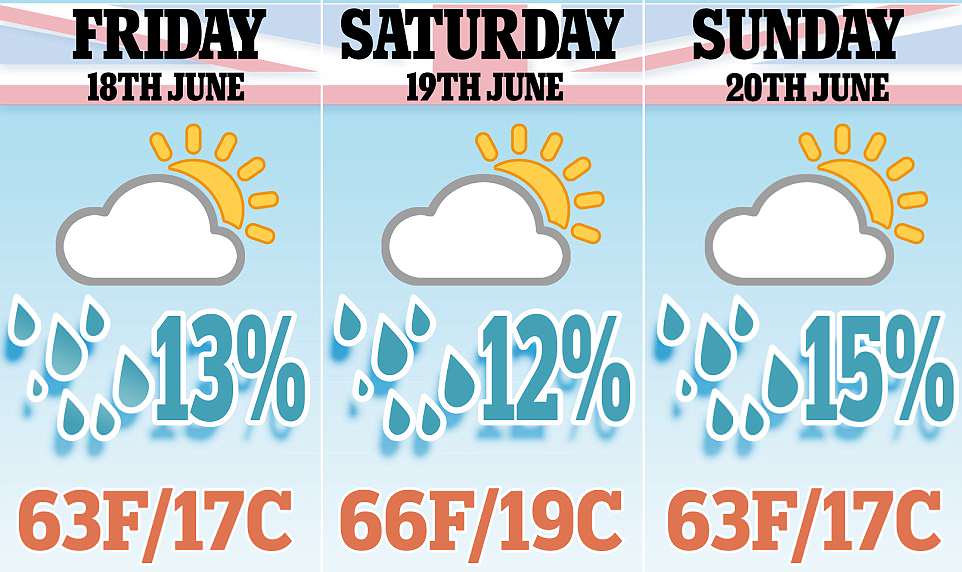 Met Office forecasters expect temperatures will make it up to 63F (17C) today in the South East, and will only rise to a maximum of 64F (18C) by the weekend – which is just above the average for the time of year.

Today will bring a dry start for most areas, although it will be windy in the North. Rain will soon move into Northern Ireland and will spread into western Britain during the afternoon, with heavy spells possible.

Central and eastern areas meanwhile will be dry with hazy sunshine, but become more cloudy later with fresh winds. Tonight, rain will continue to affect western Britain but become more confined to the North by dawn.

Tomorrow, eastern parts of Britain will be cloudy and wet, particularly in the afternoon and evening. It will also be damp at times across Wales and South West England with showers, but a mostly fine and dry day elsewhere. 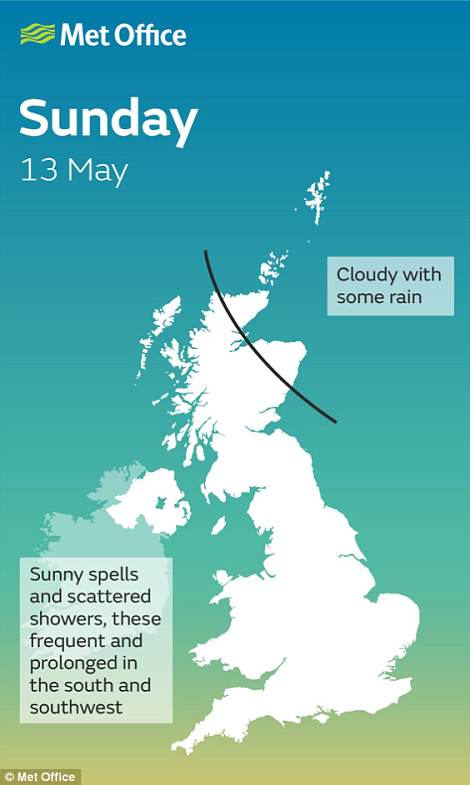 This graphic shows the forecast for today and this weekend, with showers possible in eastern areas on Saturday and Sunday 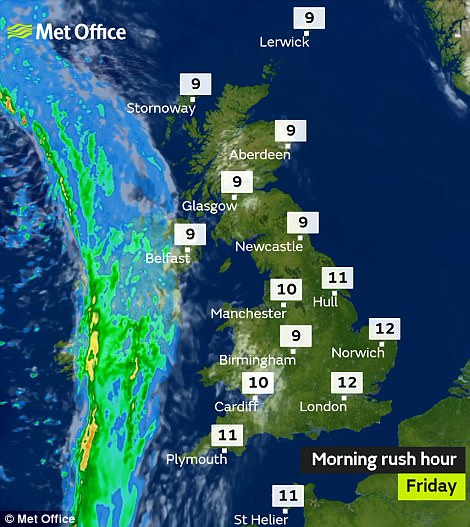 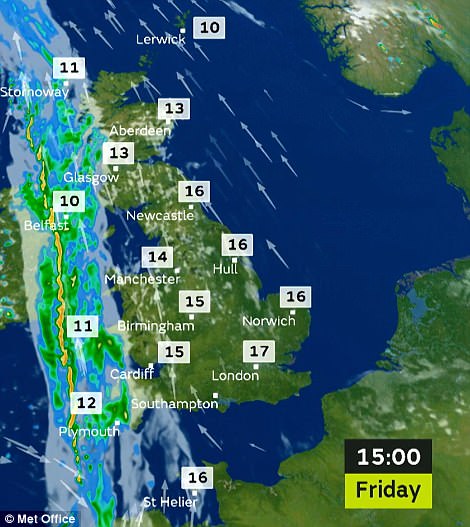 Temperatures reached 54F/12C this morning (left), before rising to 63F/17C by the afternoon in the South East (right)

On Sunday showers will affect south-western Britain, possibly thundery, with outbreaks of rain across northern and eastern parts. Monday with then be drier with sunny spells, but there will still be a chance of showers.

Met Office forecaster Sophie Yeomans told MailOnline said yesterday that some parts of Scotland could see a frost this morning, especially in countryside areas, and possibly also in northern England and parts of Wales.

She added: ‘We’ve got a band of rain pushing in from the West. It will move across into western Britain for the afternoon – South West England, Wales, North West England and Western Scotland mainly seeing that. 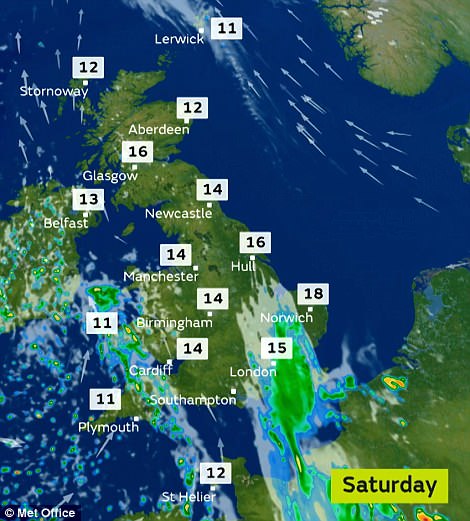 The pollen count is high for northern England today (left), while temperatures tomorrow are set to reach 64F/18C (right) 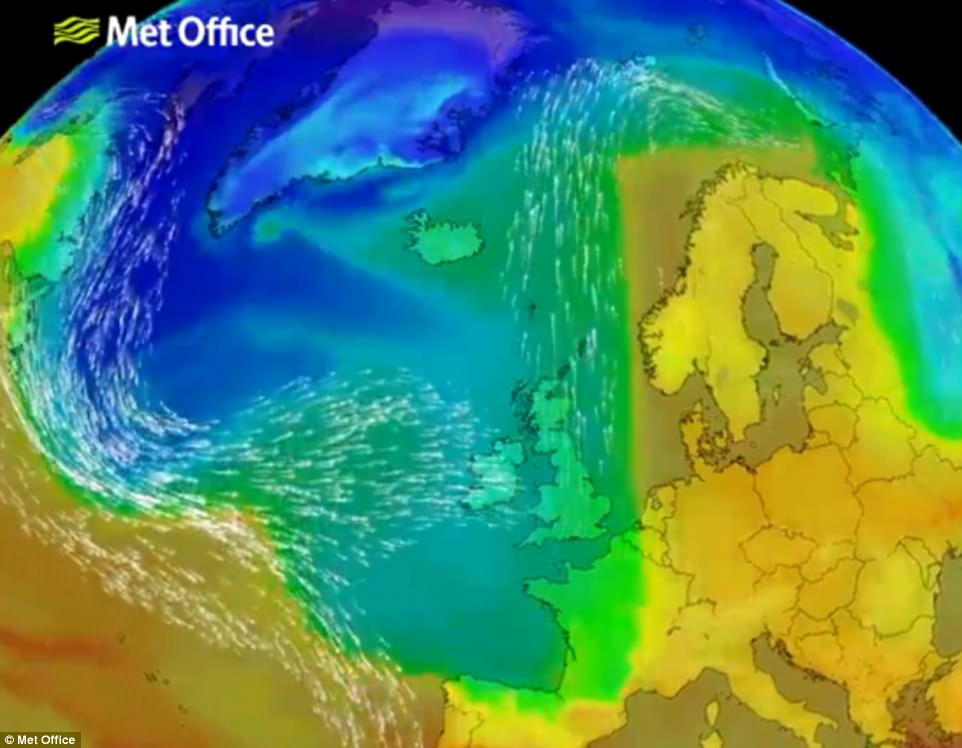 The movement of the jet stream is resulting in cooler conditions for Britain today, after it moved southwards during the week

‘North East England, eastern Scotland, South East England and some central areas through most of the day (today) are going to have another dry day, turning increasingly cloudy though.’

Looking ahead to the weekend, Ms Yeomans said there is ‘still quite a bit of uncertainty on the detail, but on the whole it looks like most places are going to see some sunshine, but there will also be some showers’.

She added that temperatures will probably be around the average for the time of year, but added that there was an ‘outside chance of hail and thunder’ for both days of the weekend.