The announcement that Saif al-Islam is planning to run for president has prompted mixed reactions within Libya. 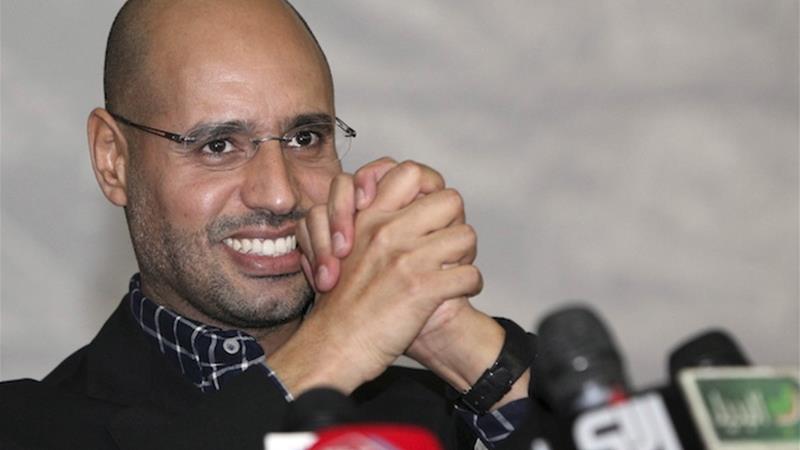 Saif al-Islam Gaddafi plans to run in Libya’s presidential elections expected for later this year, according to a spokesman for the son of ex-Libyan leader Muammar Gaddafi.

The announcement by Ayman Boras was made on Monday during a press conference in Tunisia, where the spokesman outlined Saif al-Islam’s vision of “restoring the Libyan state, making it for everyone”.

Since his release from prison in June 2017, the whereabouts of Saif al-Islam has been unknown. Boras, however, claimed that he is in Libya and is ready to become part of the political process – an announcement that stirred mixed reactions within Libya.

Mohammad al-Darrat, a member of the Tobruk-based Libyan House of Representatives (HoR), told Al Jazeera that Saif al-Islam’s intention to run does not deserve any attention, asserting that the Gaddafis’ regime is gone for good.

“If Saif al-Islam wants to return to power, what was the point of the revolution?” said al-Darrat.

He added that international and regional powers are not interested in supporting his return since the former regime is gone and the world “believes in interests rather than individuals”.

Political analyst Kamel al-Merash thinks otherwise. He believes that not all Libyans can be put in one basket, arguing that while some oppose Saif al-Islam’s plan to run, others support it.

Al-Merash said no regional forces back Saif al-Islam directly but added that some would not object to a potential candidacy due to his popularity within Libya.

Saleh Afihima, a member of the HoR and a supporter of “Operation Dignity“ led by renegade General Khalifa Haftar, agrees with al-Merash.

He believes that no one can deny Saif al-Islam’s constitutional right as a Libyan citizen, so long as there are no judicial restrictions to prevent him from running.

In 2013, a law was passed banning Gaddafi-era officials from holding public office. The law was later revoked in 2015.

Aguila Saleh, president of the HoR, said that as a Libyan citizen, Saif al-Islam has the right to run, since the lifting of the ban three years ago.

He added that unless prevented by judicial restrictions, the choice of his election is in the hands of Libyans.

Afihima told Al Jazeera that Libyans need to recognise supporters of the former regime as part of the Libyan fabric, warning that intolerance towards any Libyan would have catastrophic consequences on the national reconciliation process.

He also said that all parties must adhere to democracy, without excluding opposing views, “if we [Libyans] want to reach a real state“.

The Gaddafi regime still enjoys the support and loyalty of some tribes, especially in the south and the Warshefana region in Tripoli, as well as a number of tribes in Sirte, the birthplace of the late president.

Gaddafi was killed in October 2011 after being captured by rebels during Libya’s war. He had ruled the North African country for four decades.

Libya has since descended into chaos and is now split between three governments: two in Tripoli and one in Tobruk.

In July 2015, a court in Tripoli sentenced Saif al-Islam to death for war crimes, including the killing of protesters during the February Revolution and other crimes related to financial and administrative corruption.

He was later exempted and released following a general pardoning.

Mohamed Barra, professor of criminal law at the University of Tripoli, told Al Jazeera that Saif al-Islam must appear before the courts and defend himself against the charges put against him.

He said that in order for him to be able to legally run in the elections, the court should decide whether the general pardon also applies to him.

Alternatively, the HoR must issue a special order specifically pardoning him of all charges, added Barra.