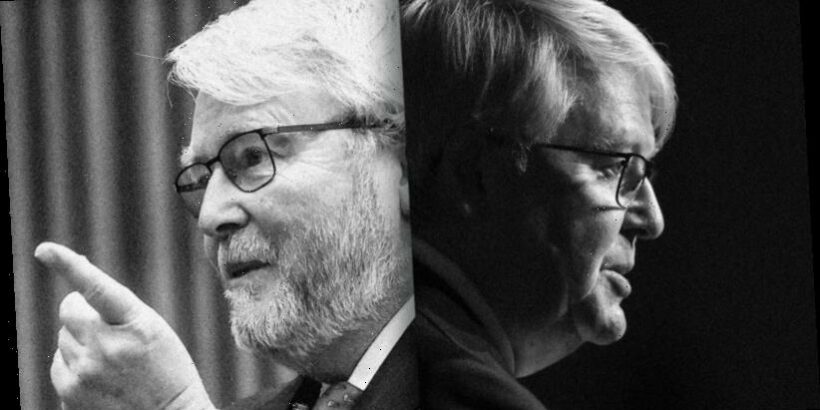 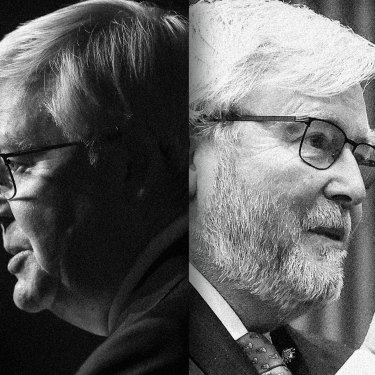 Kevin Rudd believes it is time that the ALP took up the cudgels and beat the Liberal Party and Murdoch media at negative campaigning.Credit:Alex Ellinghausen

Politics, properly defined, should be both a positive and a negative equation: to argue for our proposition for how to shape Australia’s future in national security, the economy, individual enterprise, social justice and the environment, as well as to demolish the conservatives’ proposition for the same.

Over the last decade or more, the Labor Party has dedicated the bulk of its political energies to the former, but with insufficient attention to the latter.

By contrast, the Liberal Party has had no such qualms. The Liberals since Hewson have never had a proactive policy vision for Australia’s future. Their single interest has been to destroy whatever policies the previous Labor government has put in place, and to run a continuing negative campaign against everything the Labor Party stands for, with the single objective of obtaining and sustaining political power. Any passing examination of Abbott’s election program for the 2013 federal election, and the subsequent actions taken during his term, demonstrate this central point. The same occurred in both the 2016 and 2019 elections.

The essential lesson for the Labor Party is that, as a movement, we must radically lift our negative game. We will never secure an election victory in order to deliver our program based simply on the goodness of our hearts, the righteousness of our cause or the intellectual rigour of our policies. This readjustment of the Labor Party’s political strategy, to fully embrace negative campaigning, will take courage too, because it requires a departure from the comfortable but self-defeating ways of the past. It requires that we become as brutal in our politics as the Liberals and Murdoch media have been towards us for decades. Although in our case, we can do so without resorting to the outright lying of our opponents. The truth, effectively told, is already powerful enough for our purposes.

As noted earlier, the Liberals, to compensate for their yawning deficit in ideas, vision and policy, and to camouflage the regressive nature of their substantive program in government, have mastered the alchemy of anxiety, fear, anger and even rage. Their purpose is to focus people’s attention elsewhere and to galvanise voting behaviour accordingly.

The longstanding response from progressive politicians has been to counter the politics of fear with the politics of hope. But the ugly reality is that anxiety and fear are far more potent emotions than hope, a task made easier by the underlying uncertainties of our age and the flight to certainty and security, however illusory, that these induce. Therefore, the Labor project must embrace with equal passion and execution both a positive agenda of hope as well as a negative agenda.

It requires that we become as brutal in our politics as the Liberals and Murdoch media have been towards us for decades.

Our political mission is to counter the conservatives’ emotional assault, driven by anxiety, with our own ability to mobilise people’s anger at what the conservatives are actually doing to diminish their wages, salaries, working conditions and retirement income – while increasing the cost of their education, health, childcare and aged care. It is also to explain that, while attacking the living standards of working families, these very same conservatives are delivering tax cuts to those who do not need them, and providing financial benefits, often corruptly, to their inner political circle.

And then – and only then – our responsibility is to offer these very same people real hope for the future with a positive policy program that delivers both support for them and strength for the nation.

The Liberals have campaigned for decades against the Labor Party on the grounds that fiscal stimulus, budget deficits, public debt, public infrastructure investment and industry policy undermine Australia’s economic strength by saddling future generations with unsustainable debt. On this basis, the Liberal Party argued for paying off public debt, a return to budget surpluses, deregulation, small government and low taxes as the basis of their claim to be Australia’s natural economic managers. 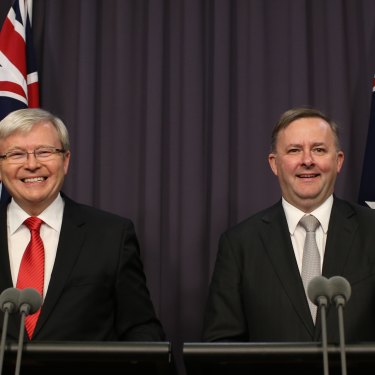 We now know this claim to have been a lie from the beginning. The Liberals now report five times the net debt than existed under the last Labor government and seven times the budget deficit, and they have now resumed the core elements of Labor’s national infrastructure plan with the proposed completion of the NBN.

The Liberals’ essential values remain individual and corporate greed. These stand in fundamental opposition to the much deeper and widely held Australian value of a fair go for all. But because greed is such an ugly value which cannot be owned overtly, Liberal strategy has always been to mask it by any other distracting device possible. This has included a wide range of campaigns all aimed at stoking a cocktail of anxiety, fear, anger, rage and xenophobia on the part of the voting public. They do this by directing people’s attention to ‘welfare entitlement and fraud’, ‘Asian investors taking our prime agricultural land’, ‘refugees and immigrants taking our jobs’, ‘foreign threats to our fundamental national security’, as well as ‘a politically correct’, now ‘woke’, culture that undermines our Australian sense of cultural identity. None of these claims can be substantiated with any credible, measurable evidence. They are political inventions.

Within a Labor Party subculture that constantly gravitates towards the intellectualisation of everything, one predisposed to ever more fevered work to develop policy perfection from opposition, to embark on a sustained, negative campaign to demolish the Liberal Party will take energy, discipline and, again, courage.

Labor’s entry point must be negative: to cause the Australian people to question, doubt and reject both the values and the policy effectiveness of the entire Liberal Party enterprise. This is necessary so that the people then begin to hear our message on how we will govern differently.

We cannot cede security and prosperity to the Liberals as ‘in-built’ conservative values, as some on the centre-left are tempted to do. All citizens have a legitimate expectation of being secure, just as they should aspire to individual and national prosperity through their own hard work, enterprise and success. Values of equality, a fair go for all and environmental sustainability are more familiar elements of the Labor repertoire. But if we fail to offer all five values as our foundational message to the Australian people, we will fail. Besides, our long and distinguished record of government during previous economic and national security crises means we have everything to be proud of on this score, and nothing to be ashamed of.

Australia now confronts a series of global mega-changes that present us with existential challenges to navigate if we are to secure our future. The big five challenges are:

Our vision for government does not mean that we literally have to ‘cover the field’ across every portfolio in public administration. In fact, from opposition, it is unwise to do so. People become overwhelmed by too much information. But they do want to know what we will do about the big things that worry them, the things that are the real sources of anxiety rather than the confected ones.

On growth, a seminal challenge for the Labor Party is to become the clarion-clear voice of Australian small business through reducing the regulatory burden of the sector while also minimising the tax impost on it. Small businesses are the ‘little guys’ of the Australian economy who provide the bulk of the nation’s employment. They are a natural constituency for the Australian Labor Party. We should champion their success. 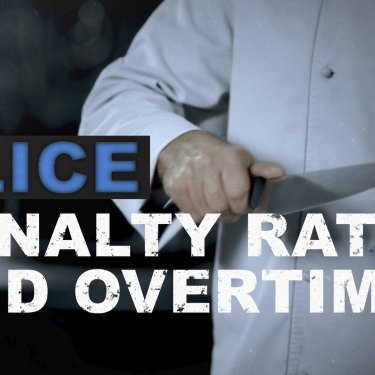 Labor is stepping up its fight over industrial relations changes with a national advertising campaign featuring a knife-brandishing chef who accuses Prime Minister Scott Morrison of slashing wages and conditions.

Given the growing likelihood of major employment disruptions through automation, IT and AI, Australia will need a new National Jobs and Training Agency to provide retrenched or otherwise longer-term unemployed workers with a universal training guarantee for newly emerging industries, as well as to place retrained workers in new jobs within a specified period of time. Failure to do this effectively will result in a growing generation of unemployed and alienated Australians who no longer have a stake in the country’s future.

In addition, and perhaps most controversially, I believe we must aim to build a Big Australia. Neither maximum workforce participation nor productivity growth alone will generate an economy large enough and a workforce young enough to pay for the country’s future. The ageing of our population is real. The impact on future retirement income, health and aged-care costs will be prohibitive. That’s why we need to plan effectively for an optimum population size. A Big Australia is not incompatible with properly mandated urban planning, infrastructure development and environmental sustainability.

Australia must transform itself by mid-century into a net-zero-emissions economy. With the right policy settings, this is entirely compatible with building a much bigger Australia. We need a globally competitive carbon price set through the market mechanism of an emissions trading scheme. We will also need to maintain and expand the existing Renewable Energy Target.

Solar panels should become a mandatory part of the national building code for all new structures. And the government should directly fund the installation of solar energy equipment in public housing, ensuring that the most vulnerable, who struggle with our country’s high energy prices, immediately see a reduction in their cost of living.

Sustainable economic growth has two basic conditionalities: a natural environment that can support it, and a social contract that ensures that society does not fracture as a result of the inequalities that arise from our existing growth model. Over the last seven years, wages and salaries growth has flatlined, while corporate profits as a share of national income have risen significantly. If this trend continues, political support for our current economic growth framework will eventually collapse, polarising politics away from the centre-left and the centre-right towards the extremes. This process is already well down the road in Europe and America. It also contains clear warning signs for Australia.

Australia must now redefine its social contract to reduce inequality before the system begins to fracture. Future tax reform must benefit low and middle-income earners, not further advantage those who don’t need redress. Childcare must make greater workforce participation easier, not harder. So too with paid parental leave.

Payments to the unemployed must be adjusted to maintain human dignity. The National Health and Hospitals Network, first negotiated in 2010, must be revisited with the states and territories, then fully implemented federally, to ensure that our universal health system is financially sustainable for the long term – rather than slowly dying a death of a thousand financial cuts. 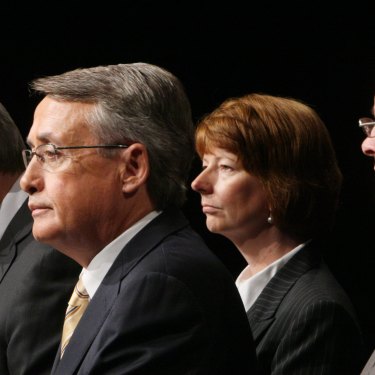 The Australian social contract should be expanded by ensuring retirement income adequacy for those on low and middle incomes. The superannuation guarantee level should continue rising to 12 per cent, as we originally legislated in 2010.

I do not believe we can safely guarantee the nation’s future in this deeply uncertain world unless we become much bigger than we are. Precisely how much bigger will be a matter for detailed research on what we will need for our future national capacity, although a figure of 50 million people should be within our reach for the second half of the century.

This is an edited extract from The Case for Courage by the Hon Kevin Rudd, published March 1 as part of the new In the National Interest series from Monash University Publishing.