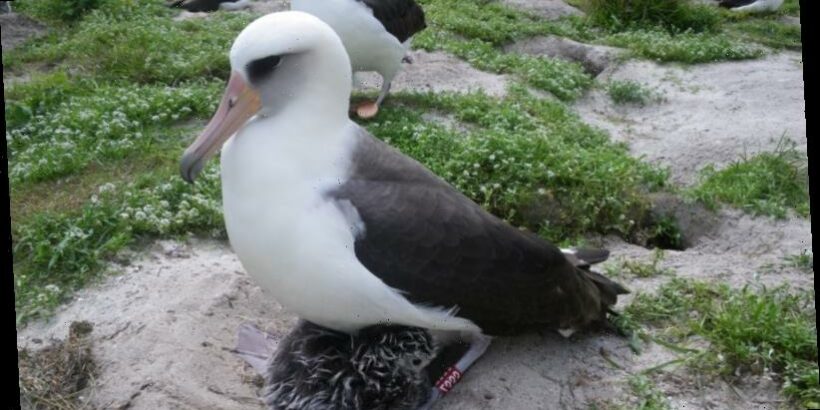 At more than 70 years young, Wisdom, the world’s oldest known banded wild bird, is taking on the challenge of motherhood once again.

An egg laid by Wisdom, a Laysan albatross, late last year on a speck of land in the Pacific Ocean hatched at the beginning of last month, the US Fish and Wildlife Service announced. 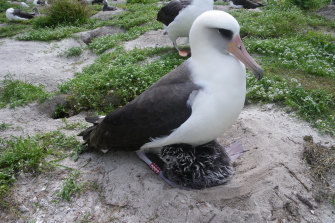 The Laysan albatross named Wisdom, who was first identified and banded on Midway Atoll in 1956, has hatched a chick at the age of at least 70.Credit:John Klavitter/The New York Times

Biologists believe that Wisdom, who was first identified and banded on Midway Atoll in 1956, has hatched between 30 and 36 chicks, possibly more.

Even before she became the world’s oldest known breeding bird, Wisdom defied expectations.

She has logged hundreds of thousands, if not millions of miles flying around the northern Pacific Ocean and has earned the distinction of living about twice as long as the average Laysan albatross.

“Albatrosses are extremely long-lived, but the unusual thing about Wisdom is she’s so much older than other birds,” said professor Richard Phillips, a seabird ecologist and head of the higher predators and conservation group at the British Antarctic Survey. 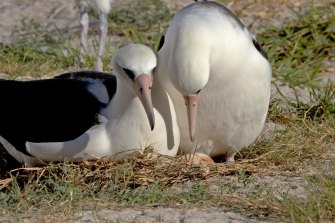 Wisdom, right, with her mate Akeakamai tending to a previous egg in 2015. Credit:US Fish and Wildlife Service via AP

“You wouldn’t expect a bird to be quite as much of an outlier as she is,” Phillips added, explaining that the next oldest banded albatross he has ever come across is 61 years old, at least nine years younger than Wisdom.

Though albatrosses tend to mate for life, Wisdom’s longevity means that she has had multiple mates, Dr Beth Flint, a biologist for the US Fish and Wildlife Service, said in an online post. The father of the chick that hatched February 1 is Akeakamai, Wisdom’s mate since at least 2012.

The parents will share feeding duties for the chick, providing a diet of fish eggs and squid by regurgitating the food that they forage while at sea into their offspring’s mouth. By the summer, the chick should be ready to fly for the first time, the US Fish and Wildlife Service said.

The Midway Atoll National Wildlife Refuge and Battle of Midway National Memorial, found in the far northern end of the Hawaiian Islands, is home to the world’s largest colony of albatrosses and millions more sea birds.

Albatrosses like Wisdom and Akeakamai return to the 6.5-square kilometre island each winter for nesting and mating. These sea birds typically lay at most one egg a year as the effort of incubating it, feeding it and parenting it after it hatches is so great.

Wisdom has surprised researchers in this respect, too, as she has hatched chicks almost every year for the past 15 years.

“Ordinarily you expect albatrosses to age in the same way as humans and for their breeding frequency and success to drop off with increasing age, so again Wisdom is unusual in that she still seems to be breeding fairly regularly,” Phillips said.

How many more years will Wisdom survive to continue hatching chicks? “No one really knows,” said Mike Parr, president of American Bird Conservancy. “We are in uncharted territory,” he said, adding that the bird’s survival so far was a ray of hope.

Biologists at the Midway Atoll wildlife refuge have been studying and tracking thousands of albatrosses like Wisdom for 85 years, and Wisdom has been returning to the island for decades, even outliving ornithologist Chandler Robbins, who first banded her.

Wisdom’s return, Flint said, “not only inspires bird lovers everywhere but helps us better understand how we can protect these graceful seabirds and the habitat they need to survive into the future.”