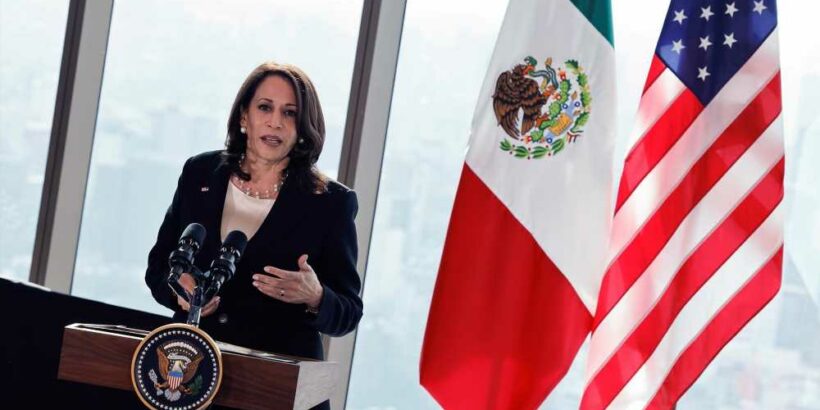 ‘A slap in the face’: GOP pols take aim at Harris for absence at border

Kamala Harris’ most senseless dodge yet

Biden throws his clueless vice president under the bus

During her trip to Mexico on Tuesday, Vice President Kamala Harris took a question from a woman introduced as a “Univision reporter” — before it was revealed that she was not a reporter at all, exposing a vetting hiccup by the VP’s staff.

Harris, who had just met with President Andres Manuel Lopez Obrador, was taking questions from the press when her chief spokesperson Symone Sanders turned to “Maria Fernanda of Univision.”

“Thank you, Madam Vice President. For me, it’s an honor because I was able to vote for the first time as a nationalized citizen and I voted for you,” the fawning woman began.

“My first question is: What would you say to these women, those mothers, and also women of color on both sides of the border — farmers, many of whom I see every day, as a message of hope? But also, what will you do for them in the coming years?” she then asked.

The smiling veep replied: “That’s a great question, and thank you.”

But it turns out that the woman — whose full name is Maria Fernanda Reyes — is not a reporter for Univision, but a San Francisco Bay Area entrepreneur who told Fox News she spends much of her time traveling and working with farmers in the US, Mexico and India.

She was in Mexico City helping Mayan farmers and working with the poor to help them navigate the coronavirus pandemic when she was asked by fellow entrepreneurs to attend Harris’ event.

Reyes said she was surprised by how quickly her question made waves, adding that she wished its substance got more attention than the mistake.

“Everyone’s trying to twist it for their own agenda,” she told Fox News, pointing out that she wants to see conditions improve in the countries in the region.

“I don’t care. I asked a question. If people don’t like it, fine,” she said, adding that she didn’t immediately correct Sanders because she got caught up in the moment.

Incidentally, Univision does employ a Maria Fernanda — but her last name is Lopez, not Reyes, and she is based in Miami.

“Let it be clear to everyone that Ms. Maria Fernanda Reyes is not part of this media organization,” Univision news director Daniel Coronell said in a tweet.

Lopez told Fox News: “My name is Maria Fernanda LOPEZ, I have never traveled in my life to Mexico. I was in Miami during the incident where a lady named Maria Fernanda REYES was presented by mistake as a Univision reporter, which is incorrect….”

Meanwhile, Sanders said her team was “looking into” the mixup.