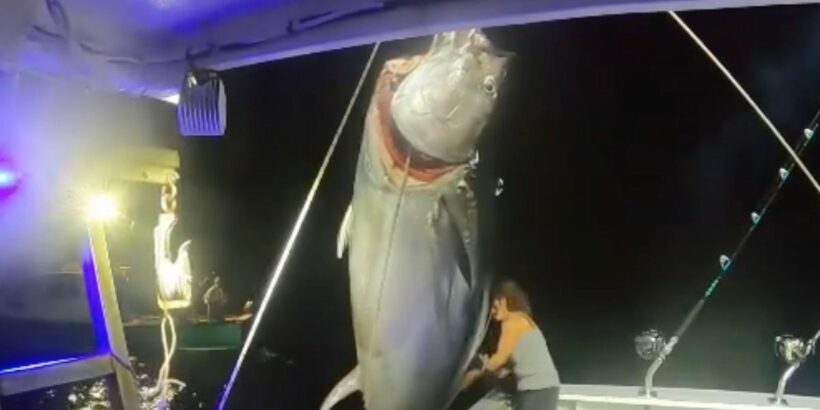 This is the spectacular moment a fisherwoman hoists a massive 1000lbs (454kg) bluefin tuna onto her fishing boat.

Michelle Bancewicz Cicale, from Seabrook, New Hampshire in US, reeled in the monster 9ft fish off the coast of Hampton Beach as she went for a solo fishing trip in October.

She posted a jaw-dropping video on Instagram, showing the moment she reels in the fish onto her fishing vessel "No Limits".

Michelle is seen struggling to get the fish onto the boat as the tuna's humongous size pulls the weight of the boat to the left.

She has to swing the rope back and forth so she could shake it towards the right.

After a round of efforts, she manages to bring the fish on the deck, letting out a victory sigh to other fishermen, who are watching from another boat.

Michelle said the bluefin tuna dressed out at about 601lbs (272kg) and the breed belongs to western Atlantic bluefin tuna, the largest species of tuna.

She mentioned in a local radio interview that in her previous fishing trip, she and her Lea Pinaud reeled in an even bigger bluefin tuna with one inch longer in size.

Michelle added that it took the two of them nearly four hours to subdue and it nearly spooled them 10 times.

Viewers were impressed by Michelle's skills, with one commenting: "Nice job bringing it in!"

A second wrote: "Thank you for what you do! I’m going to show this to my daughter as soon as I get back from the work trip I’m on! You are a huge role model!"

For more stories from the Daily Star, sign up for one of our newsletters here.

"I've never seen one that one before! That was awesome!" a third praised.

According to the National Oceanic and Atmospheric Administration (NOAA), the fish can reach lengths of up to 13 feet and weigh up to 2,000 lbs.

They can live to up to 20 years and only start to reproduce when they’re about 8.