A woman testified Monday that Harvey Weinstein sexually assaulted her in a hotel room during the Toronto Film Festival in 1991, then did it again when she went to confront him in the same hotel during the same festival 17 years later.

Kelly Sipherd told a Los Angeles jury that she was a 24-year-old aspiring actor at the 1991 festival and didn’t know who Weinstein was before she met him at a party.

Later that evening, she went to his hotel room to discuss a film script, but once there, Weinstein went into the bathroom and emerged wearing only an open shirt and holding a hot washcloth, Sipherd testified.

‘It all happened very, very very quickly,’ she said. ‘I was in shock. It was so unexpected.’ She said he then pulled her skirt off, put the washcloth on her and told her ‘my wife loves this.’

Weinstein, 70, is not charged with the alleged assaults described in Monday’s testimony. Sipherd, along with three others, is being allowed to testify so prosecutors can attempt to show his propensity for the crimes he’s charged with. 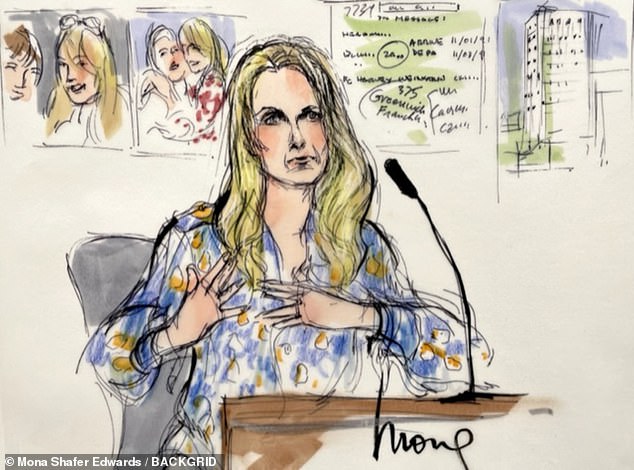 Kelly Sipherd testified Monday that Weinstein sexually assaulted her in a hotel during the Toronto Film Festival in 1991, again when she went to confront him in same hotel 17 years later 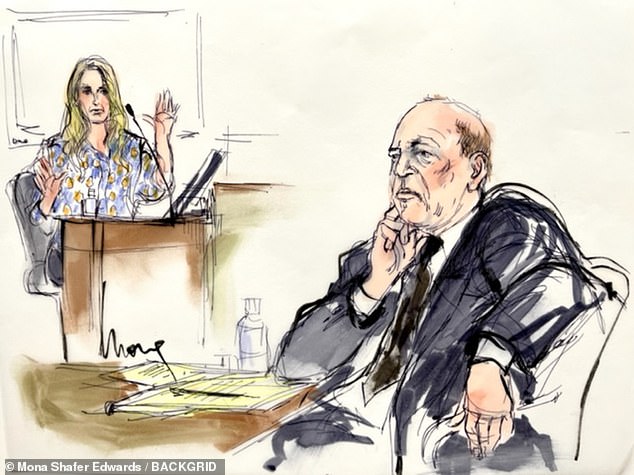 One of those women being allowed to testify was a dancer in the sequel to Dirty Dancing and went by the name Ashley M in court.

Already serving a 23-year sentence in New York, Weinstein has pleaded not guilty to 11 counts of rape and sexual assault involving five women in Los Angeles and has denied engaging in any non-consensual sex.

The Associated Press does not typically name people who say they have been sexually abused, but Sipherd agreed Monday to be named through her attorney.

On Monday, Sipherd testified that her friends there were abuzz about the man whose company Miramax had surged to the forefront of independent film and was making its mark at the Oscars.

She said she was charmed by Weinstein at first as they discussed books and films.

‘We got along very well,’ she said. ‘He was very intelligent. We had a wonderful conversation.’

She said the two of them left the party for a glass of wine at a nearby café, then she went with him to his room at the Four Seasons Hotel because he said he had a script for a film with a role that would be perfect for her.

Once there, the situation escalated quickly, she said, as she described how he pulled up her skirt.

She testified that she felt ‘nauseous, scared, terrified’ and repeatedly told him to stop and asked ‘what are you doing?’

She said he held her down and sexually assaulted her with his mouth and his hand. He then climbed on top of her and started to rape her but she was able to slip away and leave the room. 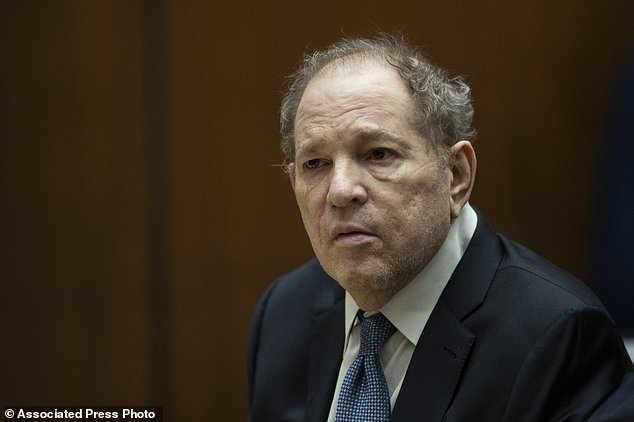 Weinstein, 70, is not charged with the alleged assaults described in Monday’s testimony. Sipherd, along with three others, is being allowed to testify so prosecutors can attempt to show his propensity for the crimes he’s charged with

THE LOS ANGELES CHARGES AGAINST WEINSTEIN

Forcible rape against the same woman on the same day – February 18, 2013

‘Weinstein unlawfully touched an intimate part of Jane Doe #3 while she was unlawfully restrained’.

Sipherd testified that Weinstein called her at home repeatedly in the weeks that followed, and she often hung up, but eventually spoke to him.

‘The encounter that you describe sounds horrifying,’ Weinstein attorney Alan Jackson told Sipherd in his cross-examination, saying Weinstein seemed like someone one would cross the street to avoid at all costs.

‘But you didn’t walk the other way, or cross the street, or spit on him, you actually took his phone calls.’

Sipherd eventually accepted an offer from him to come to New York and talk to a woman who does casting for him, but took a friend with plans to keep her constantly at her side.

‘Your rapist was persuasive in trying to get you to come with him to see him in New York?’ he asked. Sipherd replied, ‘yes.’

In New York, she said Weinstein called her in her hotel room from the lobby and told her to get rid of her friend and he was coming up. She refused, and left New York having never seen him or the casting agent.

Sipherd testified that she did not see Weinstein again until 2008, when she was 41 and temporarily living at the Four Seasons with her husband and children. She ran into Weinstein in the lobby during that year’s festival.

‘My blood kind of stopped,’ she said. ‘I was very angry.’

When Weinstein’s assistant came to her room to say he wanted to meet with her, she agreed.

‘I wanted to confront him,’ she said. ‘I felt like I was ready to give it to him.’

Once in his room, she remembered asking, ‘How does it feel to be in front of the one woman who said no to you?’

Weinstein then dismissed his assistant from the room, and quickly guided Sipherd toward a door. She said before she realized it she was in a closed bathroom with Weinstein, where he was blocking her way out.

She said Weinstein grabbed her breasts and masturbated in front of her before letting her leave the room.

Jackson said it sounded like Weinstein ‘escorted’ her into the bathroom ‘politely.’

She replied that she didn’t know she was being led into the bathroom.

‘You didn’t see the sink, the vanity, the mirror?’ Jackson asked.

‘It was dark,’ she replied.

‘So you went with him in a dark room?’ Jackson said.

Then Jackson asked why she didn’t leave, or make greater efforts to sound an alarm.

‘You find yourself for the second time alone with this rapist and you didn’t scream?’ he asked.

‘I was mortified and in shock,’ Sipherd said.

Sipherd said she didn’t tell anyone about the second assault for years because of the ‘sheer embarrassment’ of having it happen again.

Her testimony, which appears to be the first time she has told her story in a public setting, comes after others who are being allowed to testify to show Weinstein’s propensity for such acts.

Another woman Ashley M, who testified last week, told jurors in the Superior Court of Los Angeles County on Friday that she was ‘meek’, and he was ‘the boss’ on set.

She told the court she was 22 years old when she met Weinstein on the set of his movie ‘Dirty Dancing: Havana Nights’ in Puerto Rico, in which she had a job dancing for the lead couple. 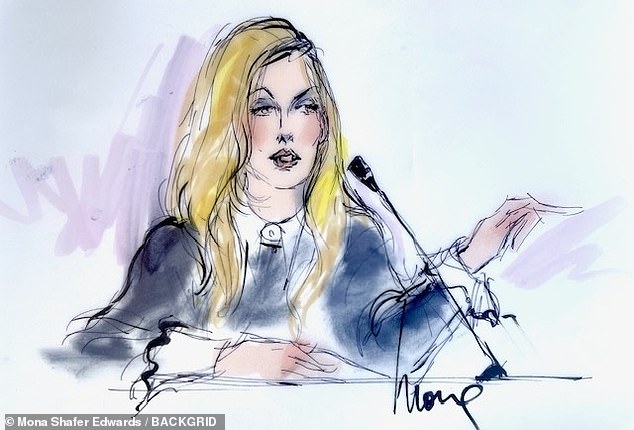 A woman identified only as Ashley M. testified Thursday at the Los Angeles rape and sexual assault trial of fallen Hollywood titan Harvey Weinstein. Ashley told the jury how Weinstein assaulted her in a hotel room during the filming of Dirty Dancing: Havana Nights 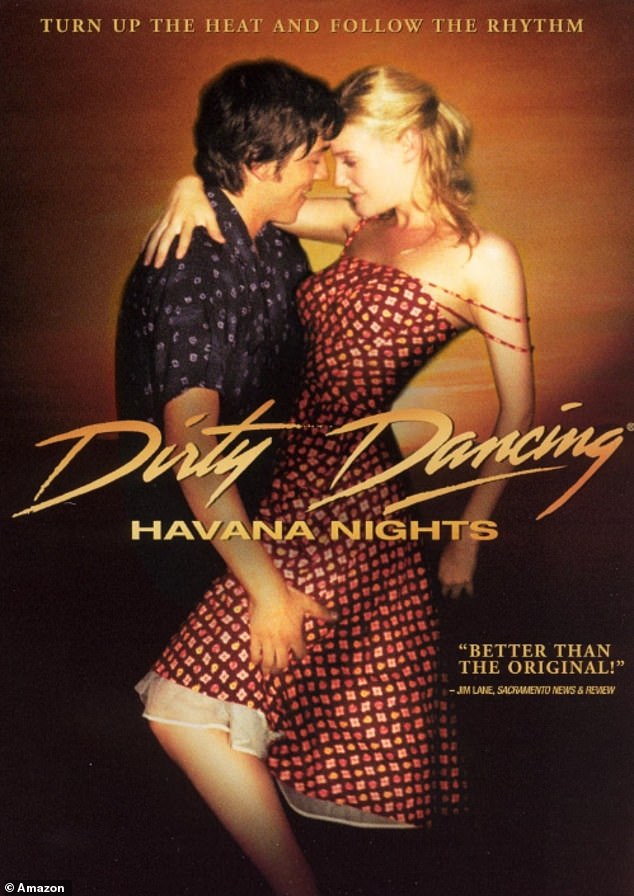 Ashley M. was in Puerto Rico filming Dirty Dancing: Havana Nights (2004) when Weinstein allegedly assaulted her. The film went on to be both a critical and box office failure

‘I felt really violated and part of me was really … you know, still emotional,’ she said, explaining why she left the set the day after the alleged attack and did not return.

She said she was approached by Weinstein on set, and was unnerved by the imposing film maestro, but was reassured by his assistant Bonnie Hung.

Hung, Ashley testified, told her: ‘Don’t worry, I’ll be with you the whole time, we’re just going to talk about future projects.’

Ashley told the jury she went to the meeting with Weinstein because she felt obliged – not because she wanted to advance her career.

‘I just basically did what I thought the people that were running the meeting wanted me to do,’ she said.

‘I really had no interest in being an actress.

‘I had spent my life dancing. I was engaged to be married. I wanted to finally start my life, maybe finally wanted to start a family at that time.’ 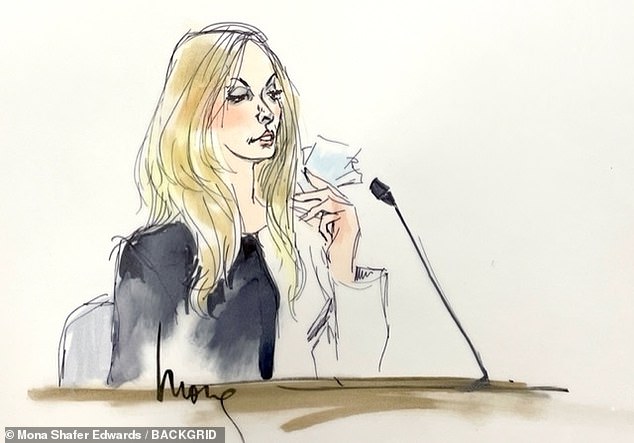 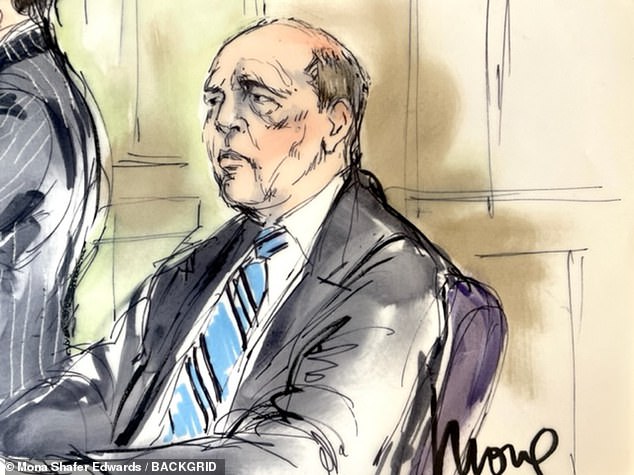 The woman, known only as Ashley M., broke down in tears as she told a Los Angeles courtroom how Weinstein had sexually assaulted her and demanded that she give him a ‘naked massage’. Pictured: Court sketch of Weinstein from October 26

Mark Werksman, Weinstein’s lawyer, pushed Ashley on why she entered the hotel if she was not interested in business offers.

‘I’m now entering a hotel, this isn’t about work. Did that dawn on you at any moment?’ Werksman asked.

‘Did you have a second thought where you just said … I’m just going to walk right back out that door?’

Ashley replied: ‘I was worried. I knew he was big and I didn’t know what to do.’

On Thursday, Ashley told the court that, as they walked down the hall of Weinstein’s hotel toward a door: ‘I started to get more worried, but Bonnie was there with her clipboard.

‘Harvey opened it and then he went in and I went in,’ she said, pausing as she began to cry.

She said Weinstein quickly became aggressive, pushing her on to the bed and taking her top off before performing a sex act on top of her.

Close to sobbing, the woman testified that the former Miramax head told her ‘it would just be a naked massage…and not to worry about it.’

Werksman is seen arriving for trial on October 24

‘He said: ‘Look at Gwyneth Paltrow and what it did for her career,” she said. 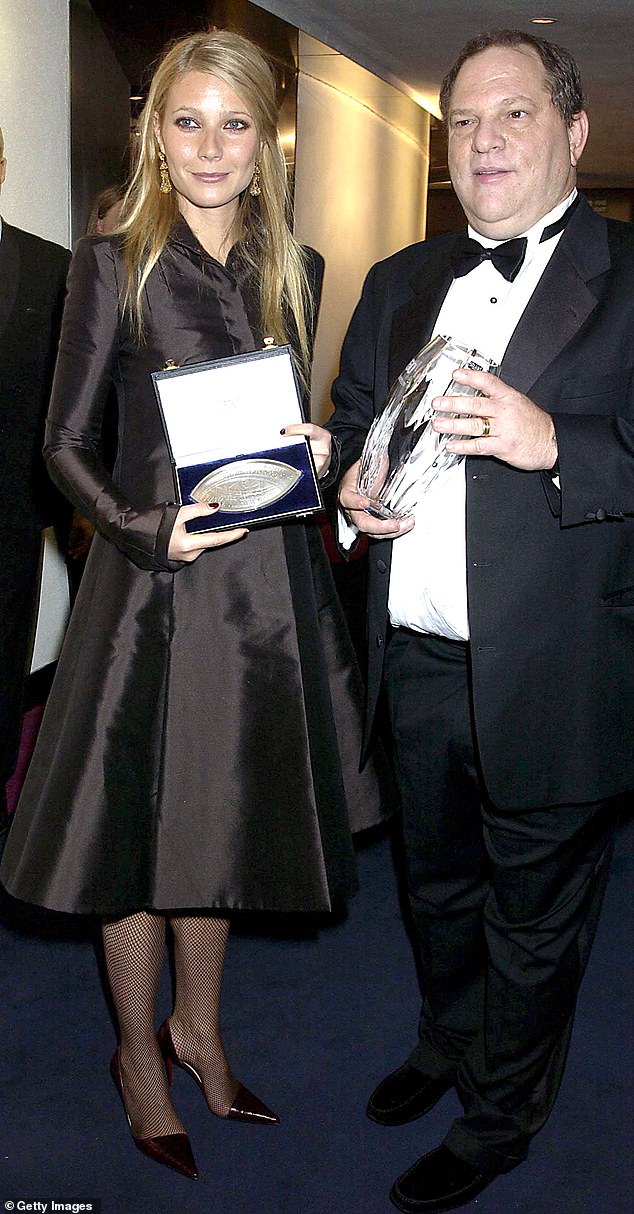 Gwyneth Paltrow pictured with Harvey Weinstein. On Thursday, a witness in Weinstein’s LA rape and sexual assault trial told the jury the former mogul told her a naked massage could improve her career prospects as it had for Paltrow 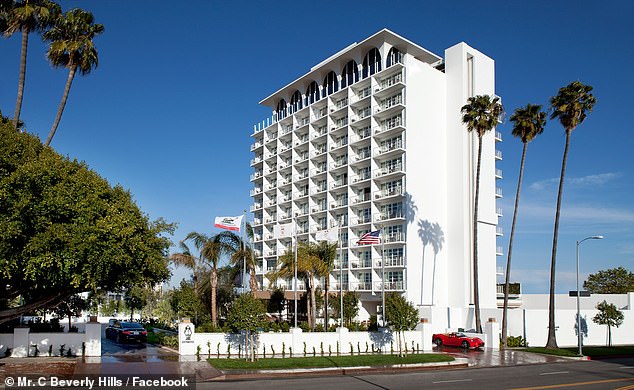 Mr. C’s hotel in Beverly Hills, where Weinstein would often attend functions. A woman identified only as Jane Doe 1 testified for three days that he raped her at the hotel in 2013

Describing what happened after Weinstein had finished, she said: ‘I was just really thankful that I wasn’t raped. I remember thinking and I remember wiping off just getting dressed really fast and leaving really fast.’

Weinstein’s attorney countered in his opening statements that ‘transactional sex’ was common.

The court heard first, on Wednesday, from Jane Doe 1, who claimed she was sexually assaulted by Weinstein in 2013 and forced to perform oral sex as he had problems maintaining an erection.

On Thursday, Weinstein’s driver testified that he drove the producer to a Los Angeles hotel on the night that he allegedly raped a woman at a hotel a short distance away. He said he had no idea what went on inside the hotel rooms.

The trial is expected to last several more weeks.

The LA proceedings were originally seen as symbolic but have taken on a new importance after New York’s highest court granted him permission to appeal his conviction.

If Weinstein wins in New York, the Los Angeles trial will determine whether or not he walks free.

Weinstein faces a life sentence in California if convicted.