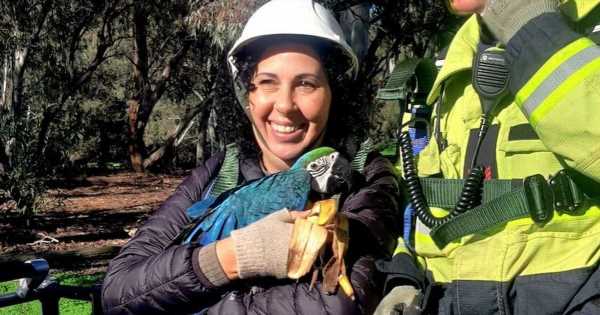 Rabbits love carrots, dogs love bones, and parrots, according to a woman who was desperately searching for her pet, love bananas.

Or at least it would seem the case after an Australian woman started lobbing bananas on her rooftop in a wild attempt to retrieve her beloved pet parrot Georgie.

The macaw seems fond of his potassium, returning to owner Lindie Roos, who had started hurling bananas in the parrot's direction after it was chased off by a flock of magpies.

The act of throwing the fruit up to the skies may have seemed bizarre but it seems to have worked after her parrot was returned to her safe and sound after it hid in a tree following a magpie chase.

Her beloved bird was chased off by a group of magpies, with Roos recalling the event and saying that the parrot had tried to return to its owners but found itself continually chased away.

Roos said: "I thought 'This is it, he'll just keep flying and we'll never see him again.' The magpies just kept chasing him.

"He tried to come back to us – he did laps around us, but then they were just on his tail and he flew off."

Roos' quick actions and composure managed to call the attention of those nearby, with a small mob forming to bring about a banana-wielding barrage that soon saved the pet.

Lee Constable of Oakden Fire Station, said: "We got a call for a bird rescue — a bird up a tree, which sounds a little bit funny to some people, but people do have pets and they do get stuck.

"We were trying to coax it with a banana as well."

Despite the terrifying incident for owner Roos and her pet parrot Georgie, ABCNews reported she has decided not to clip his wings to keep him grounded as she doesn't want "to stop the free flying".