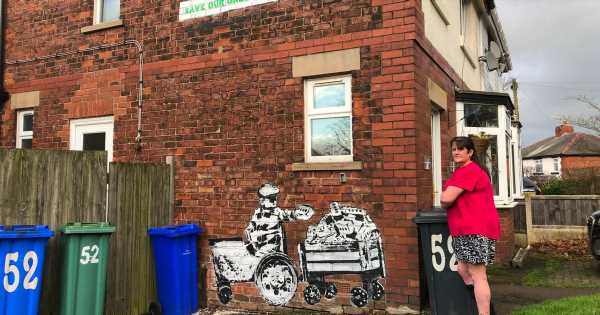 A woman was shocked to wake up and find a huge Banksy-style graffiti mural painted on the side of her house.

Nickie Hadley, 50, from Hyde, Greater Manchester, had been fast asleep while the well-known Salford-based graffiti artist, Mr Eggs, got to work on his latest piece of artwork.

Inspired by a campaign to protect a nearby development, Nickie said she loves the mural on her house, Manchester Evening News reports.

She said: "I woke up in the morning and two neighbours were stood outside. I went to the front window, they waved and said 'we love it'.

"I came out and it was there."

The artwork shows a young boy carrying a pile of bricks with a "save our green belt" banner above being carried by an aircraft.

Nickie said she had no idea what was happening while Mr Eggs was at work, joking: "It's always easier to ask for forgiveness than for permission!

"I'm in the Save Tameside Greenbelt group on Facebook and when I first joined I made a comment that I have a gable end and if anybody has a poster they were welcome to put it up. I don't know if that's where the idea came from.

"I've been in contact with Mr Eggs on Instagram and said it's a brilliant piece of artwork.

"It's amazing, I love it. It opens people's eyes to the cause.

"A lot of people still don't know about it, but if people drive or walk past and see it, it gets them talking. That's the most important thing.

"Kids walk past on their way to school and some have been taking pictures of it, so I assume they are sharing it on Instagram too."