A woman’s body has been found in the grounds of the world renowned Royal Military Academy (RMA) Sandhurst in Surrey.

Police were called to land near St Michael’s Churchyard in Camberley on Monday following the gruesome discovery.

Detectives descended on the woodland owned by the Ministry of Defence (MoD) at around 11.15am.

Forensic experts were then called in as officers said that the death was being treated as ‘unexplained’ and that foul play had not been ruled out.

The body was found in woodland on the RMA site on the borders of Camberley, Surrey and Sandhurst, Berkshire, where the Royal Military Academy is based.

Reverend Bruce Nicole, 63, vicar of St Michael’s Church, said the body was not connected to the church or the graveyard and had been found in the Royal Military Academy, which has several security fences around it.

It was not yet known whether the dead woman had any connection with the RMA or whether her death had taken place at the spot where she was found.

The military academy trains the elite members of armies to become leaders with Prince William and Prince Harry being among the former Royal Students, Sir Winston Churchill and current MP Tobias Ellwood among political grandees. 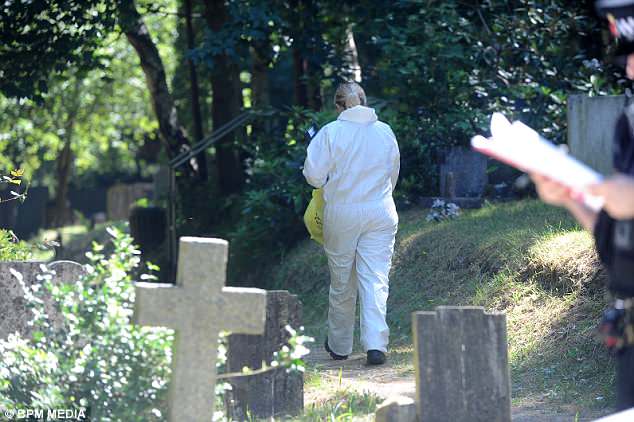 Police and forensics are still at scene of the discovery of a body in woodland behind St Michael’s Church, Camberley. The church is on land owned by the Ministry of Defence (MoD)

Three Sovereign’s Parades are held each year for students who have graduated – a tradition that started in 1948 by King George VI.

A spokesman for Surrey Police said that detectives were waiting for the results of some fast-tracked tests to decide whether the death was to be investigated as a crime.

Forensic experts carried large evidence bags from their parked vans and cars into the woodland as they searched for clues to what happened to her.

Green metal fencing, topped with barbed wire, could be seen just a few yards past the blue and white police tape, showing where the training area for the MoD starts.

A number of tents could be seen near where the body was found and the woodland floor was scattered with mugs, umbrellas, cutlery, empty cans and other objects.

At least five tents could be seen and, according to the police, the one the woman was found near to had been put up at least six months ago. 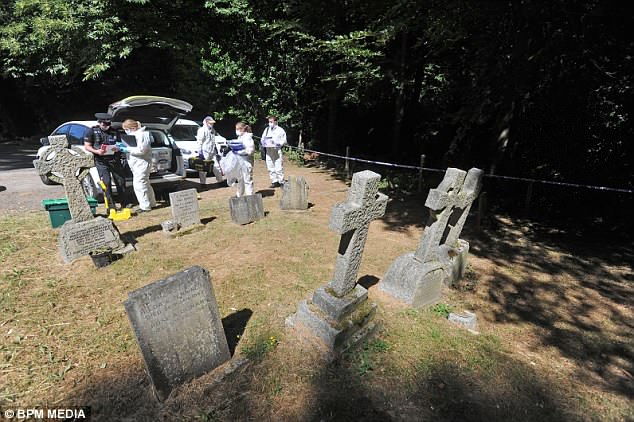 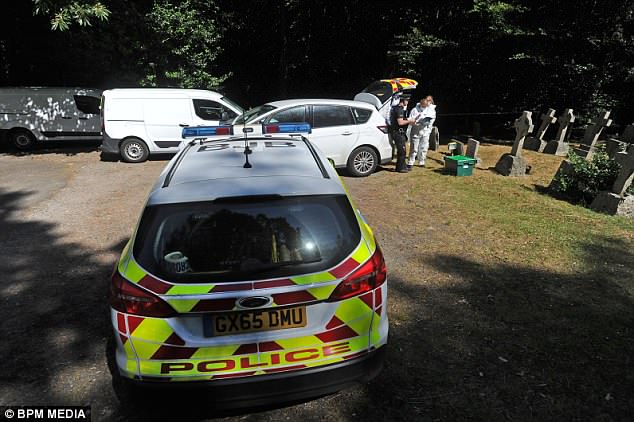 A spokesman for Surrey Police said: ‘Inquiries remain ongoing following the discovery of a woman’s body in Camberley on Monday morning.

‘The area, which is owned by the Ministry of Defence is sometimes used by rough sleepers. The woman’s body was discovered near a tent.

‘The death is still being treated as unexplained at this time. A post-mortem is due to take place tomorrow.’

Detective Sergeant Nicky Gardner, who was investigating the incident, said: ‘We are still trying to establish the circumstances of the death and are keeping an open mind at this stage.

‘The body was found near a blue tent which we believe was put up at least six months ago.’