Gaza: An explosion in Gaza has killed six Hamas gunmen, the group says.

A statement from the Palestinian Islamist group's armed wing on Saturday called the incident a "deplorable Zionist crime" perpetrated against its fighters by Israel.

"During a complicated security and intelligence operation conducted by Qassam Brigades to investigate a serious and a grave security incident conducted by the Zionist enemy against Palestinian resistance, a deplorable crime took place against our Mujahideen in the area of Zawayda in central Gaza Strip," it said. 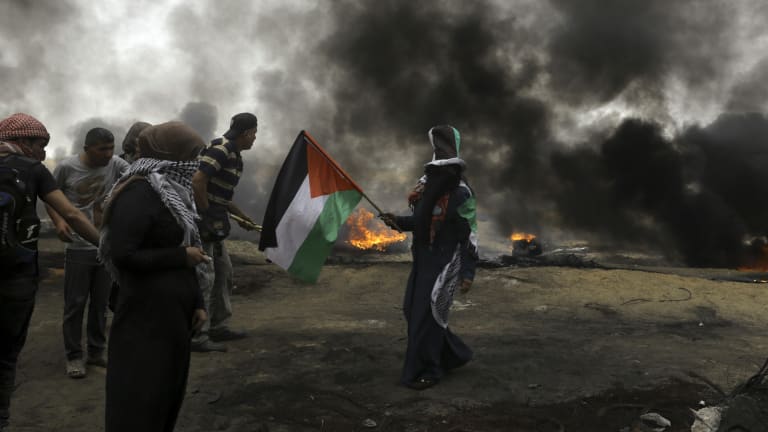 Palestinian protesters burn tyres as a woman waves their national flag near the fence during a protest at the Gaza Strip’s border with Israel.

Reuters television captured a pillar of smoke rising above the village of Zawayda near the coast of Gaza, far from the border with Israel where tensions have escalated in recent weeks.

The exact circumstances of the blast were unclear and Hamas, which controls the Gaza Strip, provided no further details.

An Israeli military spokesman declined to comment on the incident, although a more junior official had earlier denied the army was involved.

Gaza media reported the explosion was a "work accident", meaning the militants were killed when explosives they were dealing with went off.

Israel and the West designate Hamas as a terrorist organisation.

Israel withdrew its troops and settlers from Gaza in 2005. But, citing security concerns, Israel maintains a naval blockade of the coastal territory, keeping tight restrictions on the movement of Palestinians and goods across the frontier. 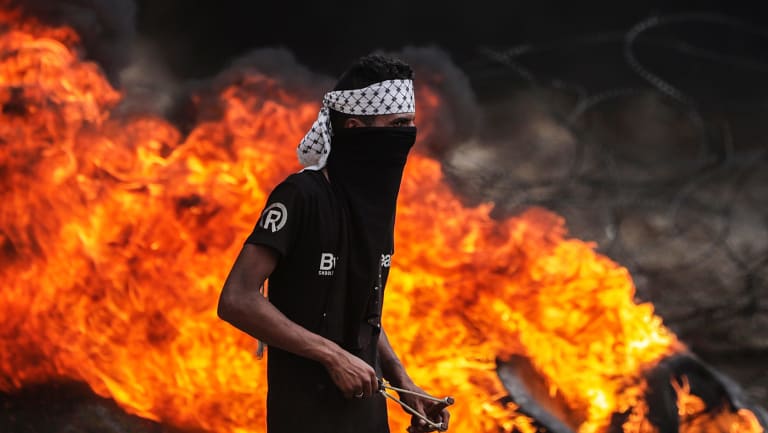 A Palestinian protester near the border with Israel in eastern Gaza City.

Forty-three Palestinians have been shot and killed by Israeli forces since March 30, when Gazans began weekly protests dubbed "The Great March of Return" along the border with Israel.

Facing international censure over its use of live fire in the protests, Israel says it is protecting its border and takes such action only when protesters, some hurling fire-bombs and trying to plant explosives, come too close.

As Israel celebrates its 70th birthday, Palestinians mourn what they call the "Nakba" (Catastrophe) of their people's mass dispossession during the conflict that broke out in 1948.