Those new rules in full that will wipe out Christmas and New Year: Working from home is back, facemasks in pubs and restaurants – and will hairdressers and gyms be included in the Rule of Six?

New lockdown rules at a glance

Boris Johnson apologetically took a hammer to Britons’ social lives today as he reintroduced lockdown measures in England to see off a second wave of coronavirus.

Pubs and other leisure and hospitality businesses like restaurants will face a 10pm curfew from Thursday.

People working in retail, those travelling in taxis, and staff and customers in indoor hospitality will also have to wear face coverings – except while seated at a table to eat or drink.

And in a dramatic reversal of the Government’s recent drive to get people back to workplaces, all office workers will be advised to work from home where they can as soon as possible.

In a grave Commons statement the Prime Minister warned that the new curbs could last for six months – taking them well beyond Christmas – ‘unless we palpably make progress’.

Here we look at the new rules that have been unveiled today:

So can I still go to the pub for a pint? 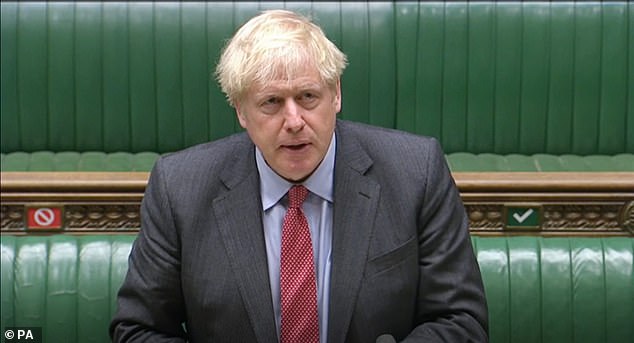 And you will not be able to wander up to the bar for a drink. All pubs and bars must become table service only, like restaurants, which are also covered by the curfew.

This is a change from the current rules, where standing at the bar for a pint was allowed as long as there was social distancing in place.

It also applies to takeaway services, many of which sustained businesses through the worst of the original lockdown.

But food (and drink) deliveries are allowed to continue after 10am because it is easier to limit human contact.

A 10pm curfew seems a bit odd, what’s the reason for it? 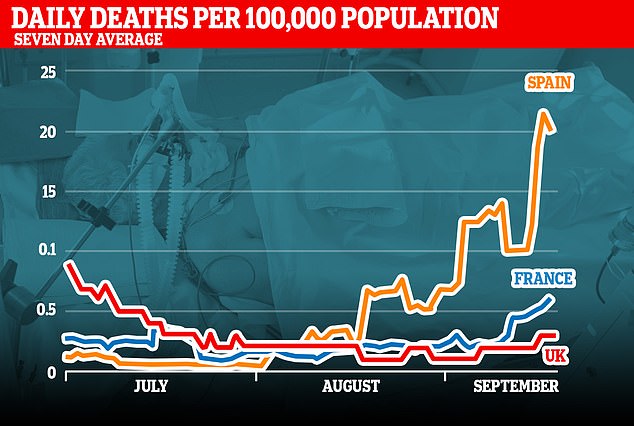 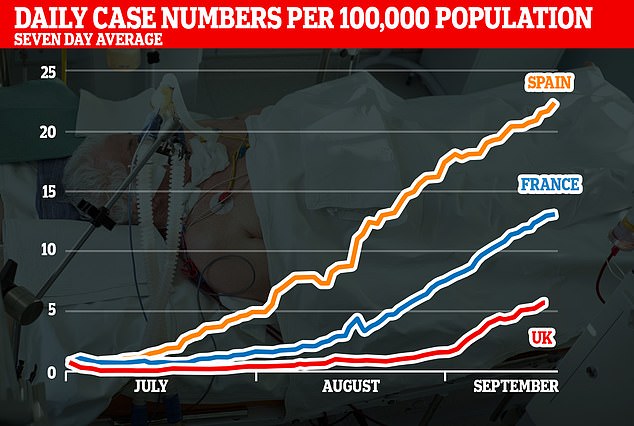 The Prime Minister told the Commons ‘the spread of the disease does tend to happen later at night after more alcohol has been consumed’.

In reply to Meg Hillier, Labour chairwoman of the Commons Public Accounts Committee he said: ‘These are not easy decisions, nobody wants to be curtailing the right of restaurants and other businesses to go about their lawful business.

‘What we have seen from the evidence is that alas the spread of the disease does tend to happen later at night after more alcohol has been consumed.

‘This is one way that we see of driving down the R without doing excessive economic damage and that’s the balance we have to strike.’

This is not going to be good for businesses through, is it?

Ministers have been warned that a 10pm curfew on pubs and restaurants will be the ‘final nail in the coffin’ for many businesses still treading water after the first wave of Covid-19.

Exasperated hospitality bosses are fuming that they are bearing the brunt of Boris Johnson’s coronavirus crackdown when Government figures show a comparably low spread of the disease in food and drink outlets.

Public Health England data reveals that of the 729 outbreaks in the week to September 13, only five per cent occurred in food outlets such as restaurants and pubs – 45 per cent were in care homes, 21 per cent in schools and 18 per cent in places of work.

Wetherspoons founder Tim Martin said: ‘The curfew doesn’t even stand up to five minutes consideration by an intelligent person because if you look at the stats… there are relatively few transfers of infections in pubs.’

What about face masks, do I need to wear one? And what if I don’t? 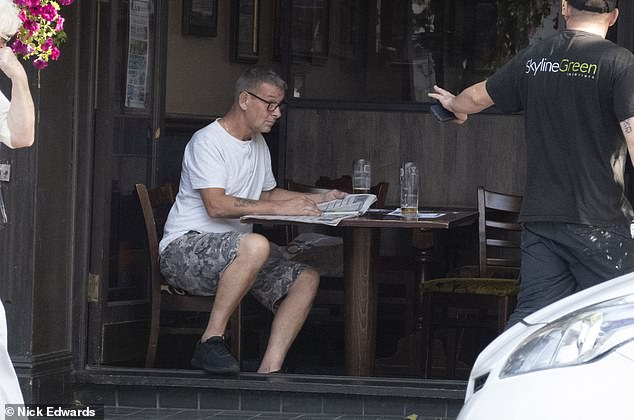 A man enjoys a a drink at The Kings Ford pub in Chingford, East London, as the PM made his announcement in the Commons this afternoon

Yes. Customers in indoor hospitality will also have to wear face coverings – except while seated at a table to eat or drink.

Face coverings must also be worn in taxis and private hire vehicles, and by retail staff while at work, although most had already brought in this requirement anyway.

People face £200 penalties for failing to wear masks where required or breaching the so-called ‘rule of six’, where a maximum of six people from more than one household can meet-up together outside, socially distanced.

The Prime Minister also announced tougher enforcement measures, with businesses facing fines or closure for failing to comply with coronavirus rules, meaning there will be consequences for pubs that try to serve you at the bar.

Should I be going to the office or should I be working from home?

If you work in an office, you should go back to working from home where it is possible.

Mr Johnson confirmed this change, which followed several months of his ministers attempting to reopen workplaces across the country.

But it is less of a blanket move than that taken in March. Mr Johnson told the Commons: ‘In key public services – and in all professions where homeworking is not possible …  people should continue to attend their workplaces.’

Examples of sectors of the economy where people should continue to go to work include: retail, construction, manufacturing, hospitality, education and health.

Asked if the WFH change was ‘immediate, from tomorrow’, the Prime Minister’s official spokesman told reporters today: ‘Effectively yes, it is as soon as possible.’

So are schools also closing again?

No. Along with protecting the economy, one of the main thrusts of today;s announcements is the Government’s desire to prioritise keeping schools open.

Mr Johnson said: ‘I want to stress that this is by no means a return to the full lockdown of March. We are not issuing a general instruction to stay at home.

Can I still go and get my hair done? Or go to the gym?

At the moment yes, but the rules have been tightened. The Rule of Six has been extended to take in ‘leisure, entertainment, tourism and close contact’ sectors’.

The later includes hairdressers and other beauty treatments.

More details are awaited on what else specifically it will mean for places like gyms, although Mr Johnson today banned indoor group sports like five-a-side football.

I’m getting married on Saturday, can the wedding still go ahead?

Yes. The maximum congregation for weddings and the reception is to be reduced from the current 30 to 15.

But the change does not com into effect until Monday, so weddings due to be held this weekend under current rules are unaffected.

And the halving does not apply to funerals, which will remain at 30.

How long is this going to last?

Mr Johnson said that the restrictions announced could remain in place for ‘perhaps six months’.

He told the Commons: ‘I fervently want to avoid taking this step, as do the devolved administrations but we will only be able to avoid it if our new measures work and our behaviour changes.

‘We will spare no effort in developing vaccines, treatments, new forms of mass-testing but unless we palpably make progress we should assume that the restrictions that I have announced will remain in place for perhaps six months.

‘For the time being, this virus is a fact of our lives and I must tell the House and the country that our fight against it will continue.’

Thursday: The latest official data presented to ministers showed that coronavirus cases were on the rise in all age groups while hospitalisations were also increasing across the board. The numbers are said to have prompted Michael Gove to call for decisive action to be taken. By the end of the day a ‘consensus’ had reportedly emerged around a plan for a total shutdown of the hospitality and leisure sectors, with Mr Gove and Health Secretary Matt Hancock said to be the leading advocates. Advisers on the Scientific Advisory Group for Emergencies also backed the plans on the grounds that it was not possible to predict the impact of a less severe curfew on pubs, bars and restaurants. Mr Johnson was reportedly initially in favour of the total shutdown.

Friday: The prospect of a total shutdown spooked ministers and officials in the Treasury and the Department for Business, Energy and Industrial Strategy who were afraid of the damage such a move would do to the economy. Chancellor Rishi Sunak is said to have asked to see the Prime Minister and the pair then met on Friday afternoon. Mr Sunak spelled out his fears in person and Mr Johnson was apparently sympathetic to the message from the Chancellor, asking officials to look at other options.

Saturday and Sunday: Mr Johnson held further talks with senior ministers as well as with Chief Scientific Adviser Sir Patrick Vallance and Chief Medical Officer Professor Chris Whitty as the premier tried to hammer out an agreed way forward. Mr Johnson eventually decided to go ahead with a curfew plan instead of a total shutdown as the ‘hawks’ in the Cabinet appeared to win the battle with the ‘doves’.

Monday: The PM’s latest lockdown plans were formally decided upon by senior ministers ahead of a formal announcement today.