The world has become less peaceful over the last decade and is likely to continue to do so because of COVID-19, according to this year’s Global Peace Index (GPI).

In the last year the GPI average decreased by 0.34%.

This is the ninth time in 12 years that the overall level of peacefulness has fallen, with the average level of global peacefulness down 2.5% since 2008.

The GPI is produced annually by the Institute for Economics and Peace (IEP) and ranks countries according to how peaceful they are.

To do that it scores each country according to 23 different indicators, as set out in the chart below.

This year Iceland was once again classed as the world’s most peaceful country, having ranked top every year since the index was started in 2008.

The rest of the top five positions were filled by New Zealand, Portugal, Austria and Denmark, all of whom were also in the top five last year.

Meanwhile Afghanistan was once again ranked as the least peaceful country in the world, closely followed by Syria, Iraq, South Sudan and Yemen.

Overall Europe was the most peaceful region of the world, while the Middle East and North Africa (MENA) was the least peaceful.

This year’s report found the gap between high and low ranking countries is continuing to widen.

Over the last decade the 25 most peaceful countries have seen an average increase in peacefulness of 2.1%.

But the 25 least peaceful countries have seen an average decrease in peacefulness of 12.9% over the same period.

One of the major reasons for the fall in peacefulness over the past decade is due to the rise in civil unrest.

“It is conflict that is driving this decrease in peacefulness,” says Serge Stroobants, Director of Europe and MENA for the IEP.

“What we need to understand is that conflict is really destroying economies and by doing so further destabilising countries.”

Crucially he says civil unrest is no longer concentrated in the MENA region but has spread to other areas.

In 2019, 96 of the 163 countries ranked by the IEP experienced at least one violent demonstration, including places like France, Hong Kong and Chile.

“We have seen that different parts of the Americas, especially Central America, the Caribbean and South America are seeing decreasing levels of peacefulness,” said Mr Stroobants.

“This is basically due to political instability and internal conflict going on in those regions.”

The report found that in 2019 there were 3.4 times as many riots, general strikes and anti-government demonstrations as in 2011. 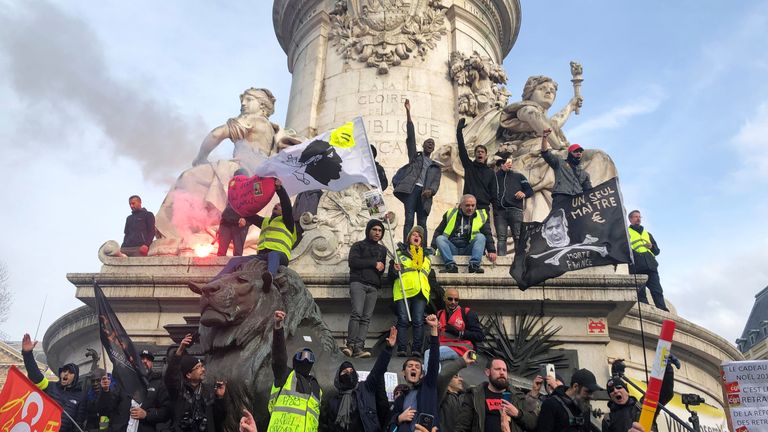 Europe had the largest share of these events, with 1,600 riots, strikes and demonstrations between 2011 and 2018.

However, in Europe 65% of these events were non-violent, the highest proportion of any region.

Alongside civil unrest, the IEP says growing environmental pressures also have the potential to decrease global peace levels in the future.

By 2050, they estimate climate change will have created up to 86 million additional migrants in sub-Saharan Africa, 40 million in South Asia and 17 million in Latin America.

Meanwhile, the number of natural disasters has tripled in the last four decades.

Together these factors are likely to cause a rise in conflict as groups compete for scarce resources.

This will be compounded by the fact that 2.26 billion people are estimated to live in areas with high exposure to climate hazards.

Of these people, 1.24 billion are based in countries with already low levels of peacefulness, which are less likely to be able to adapt to a changing environment.

The Global Peace Index released today is based on data predominantly from the period before the coronavirus outbreak became widespread.

But the IEP has conducted additional research on the potential impact of the pandemic, and found that most of the indicators used by the GPI are likely to deteriorate further over the next year.

Their research suggests that the pandemic will cause a reduction of overseas aid budgets, leading to further destabilisation of countries such as Liberia, Afghanistan and South Sudan.

It also found countries with poor credit ratings, like Brazil, Pakistan and Argentina, may struggle to sustain their economies leading to an increased risk of political instability, riots and violence.

Elsewhere, countries in Europe are expected to see a rise in riots and strikes over the next year, while oil producing countries in the Middle East will be destabilised by falling oil prices.