Many Herald readers will be looking at this editorial with bleary eyes having spent the night watching the first two quarter finals of the FIFA World Cup in Russia. This weekend includes some of the most anticipated match-ups of what has already been a great tournament: Belgium versus Brazil and Uruguay against France. 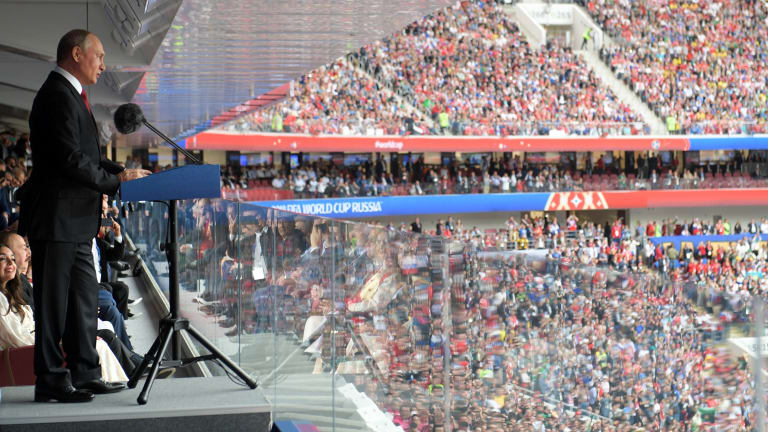 Vladimir Putin speaks at Luzhniki Stadium in Moscow before the opening match of the World Cup.

With a week to go of the four-week event it is time to say that this World Cup has been a success and to pay tribute to Russia for hosting it. It is not just the football. The logistics have been well co-ordinated and the stadiums world-class.  The atmosphere has been spontaneous and fun. It helps that the Russian team has done a lot better than anyone expected.

Yet this creates a dilemma for the West which for the last few years has seen Russia as a dour geo-political trouble maker hostile to democratic values. Praising Russia's World Cup risks legimitising President Vladimir Putin's authoritarian rule.

Russia invaded Ukraine in 2014 and likely played a role in the shooting down of Malaysian airliner MH17 with the loss of 38 Australian lives. It has given succour and cyber-support to far-right parties that have destabilised politics in Europe and of course the US. Only this week Russia refused a visa to former Australian spy master Dennis Richardson for an innocent tourist visit.

Even in the world of sport, Russia has failed. Russia was disqualified from taking part as a team in this year's Winter Olympics in South Korea because of its systematic state-sponsored doping program. It only won the right to host the World Cup this year in a questionable process run by now disgraced FIFA officials. Mr Putin still issued a personal invitation to former FIFA boss Sepp Blatter to attend the event ignoring his role in tolerating the blatant corruption in world football's governing body.

To his credit, Mr Putin has played the World Cup card with discretion, keeping himself mostly out of the limelight and refraining from egregious displays of national pride. After watching the opening match against Saudi Arabia which Russia won 5-1, he has not gone to games. He only spoke by telephone to the King of Spain after Russia's incredible win over the former world champions on penalties. This is in marked contrast to some of the triumphant nationalism at the Sochi Olympics in 2014.

But the geopolitics of the World Cup remain uncomfortable and could grow more so this week if as is possible Russia play England in the semi-finals. The British cabinet has boycotted the Games so far in protest at the use allegedly by Russian agents on its territory of a toxic nerve agent which caused more damage this week. If England make the final, pressure for a British minister to attend will be immense.

Russia's successful World Cup gives hope that the Russians are not as different to us as lingering Cold War stereotypes suggest and that Mr Putin is still keen to be a member of the international community.

US President Donald Trump is due to hold his first one-on-one meeting with Mr Putin in Helsinki, the day after the final. That is a good thing. It is probably time that the two leaders spoke at length.  The issue of Russia's interference in the 2016 presidential election is significant and deserves to be thoroughly investigated but it is only a minor reason for the Trump phenomenon. It should not have been allowed to drive relations to an impasse which helps neither side.

Mr Putin  must be enlisted to play a role building peace in the Syrian conflict and work to prevent a foolish war between the US and his ally Iran over the nuclear issue.  The US also wants Russia to help stabilise global energy markets.

When he sits down with Mr Putin, however, Mr Trump must not sacrifice basic principles.  Many would say Mr Trump was too quick to agree to a meeting with North Korea's Kim Jong-un and won very few concessions on nuclear disarmament at the summit. Mr Trump must not allow himself to be played in a similar way by Mr Putin, one of the toughest and most experienced operators in diplomacy. Given the allegations about Mr Trump's covert ties to the Kremlin it is unsettling that the two leaders will reportedly meet without officials present. Whatever the format Mr Trump must not sell out Ukraine or the victims of MH17. He must vigorously condemn Russian interference in Western democracies. Then and only then, after delivering all those stern messages, would Mr Trump be justified in congratulating Mr Putin on throwing a good party for the 2018 World Cup.