Beijing: The commemorative coins have been minted and Singapore is going into lockdown.

On Tuesday at 9am, the theme park-like resort island of Sentosa will play host to a meeting between the two most unpredictable, oversized characters treading the world stage.

"Dotard meets Rocket Man" was the headline in The Korea Times after the brash decision by US President Donald Trump to accept North Korean leader Kim Jong-un's surprise invitation to meet was announced three months ago. 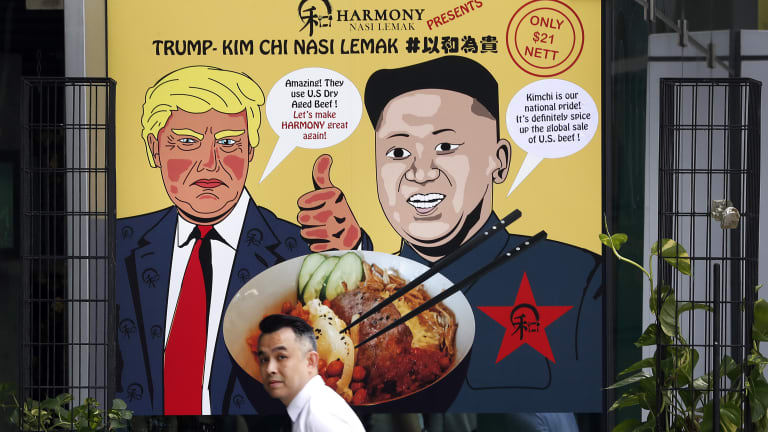 Just 300 metres from the Capella hotel, where a US president will sit down for the first time with a North Korean leader and talk nuclear weapons, is Universal Studios. It boasts the world's tallest duelling rollercoaster, "a battle between good and evil", and "unbelievable thrills" as two intertwined coasters race towards each other.

Negotiations to this point have felt like the nearby rollercoaster ride, and, come Tuesday, the world will strap in and hold its breath for more.

Kim is reportedly fearful of assassination. Singapore will be the furthest he has travelled as leader.

Police have declared the surrounds of the summit high security areas, and across the city citizens have been told to be vigilant.

Kim will fly via China on his private modified Soviet jet, and the South China Morning Post has speculated that China could offer a fighter jet escort.

The White House has warned that Trump, 71, will walk out in minutes if he doesn't like what he hears. He has already cancelled once. But the 30-something Kim, who only travelled abroad on his first state visit as leader in March, wants this meeting.

Just sitting at the table, face to face with a US president, is itself a victory for Kim and something his father and grandfather were unable to achieve, says the Wilson Centre's Jean Lee, a former correspondent in Pyongyang.

Joseph Yun, Washington's special representative on North Korea until he resigned in February, observes that the leaders' summit is "doing it backwards" for Washington. Committing to meet before knowing what the outcomes or press lines would be has its drawbacks.

But he compares it to US president Richard Nixon going to China in 1972. "We must avoid war and this is a great move," Yun said in an interview with the Korea Economic Institute of America.

Trump has also wanted a face-to-face meeting for a long time, even stating this in his election campaign, says Yun. Unlike many other analysts, Yun believes Trump is "adequately prepared".

Trump himself was also typically self-confident, saying on Friday: "I think I'm very well prepared. I don't think I have to prepare very much … It's about attitude. It's about willingness to get things done.” 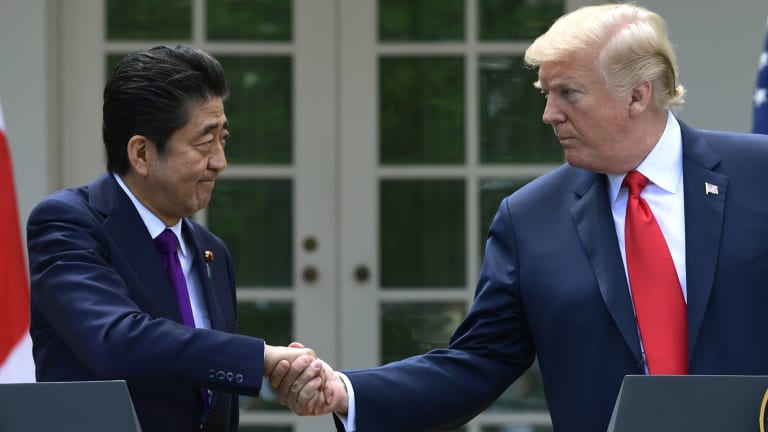 Susan Rice, former national security adviser to Barack Obama, tweeted this week that it was "unimaginable" that there had been no top-level meetings of the National Security Council "to prepare for the most consequential diplomatic high-wire act in years".

But five rounds of talks have been hurriedly held between North Korean and US officials in the past fortnight, with US ambassador to the Philippines Sung Kim, a veteran diplomat, playing a key role.

Once Dear Leader of the hermit kingdom, Kim Jong-un's recent performance in his two rapid meetings with Chinese President Xi Jinping, and the success of the inter-Korean summit with South Korean President Moon Jae-in, suggests the interpersonal dynamic of the meeting with Trump will go smoothly, Yun says.

But for the summit to be declared a success will depend on whether the two leaders can sign a broad agreement covering denuclearisation and security guarantees for North Korea, and give some immediate concrete steps that will be taken. 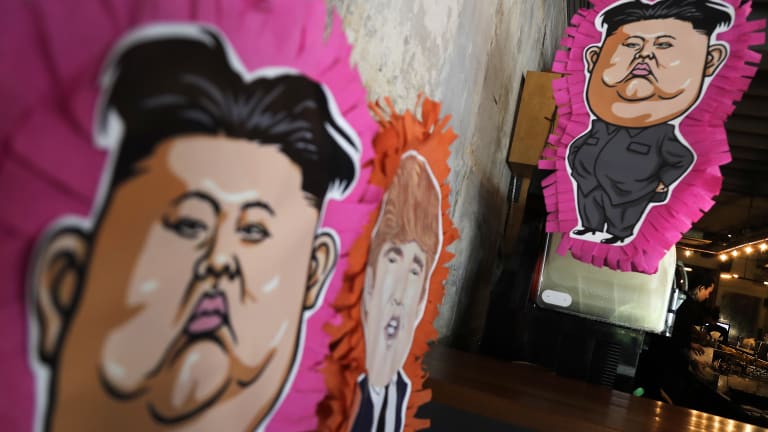 Pinatas at a Singaporean Mexican restaurant in anticipation of the Trump-Kim summit.

Yun also warns he wouldn't want to see anything that would degrade the US alliance with South Korea or Japan, such as troop reductions on the Korean Peninsula or a reduction in military exercises. "The US must have a presence in north-east Asia," he said.

Yet Trump's reported impatience with the cost of stationing 28,000 US troops in South Korea make this a risk, despite US Defence Secretary James Mattis stating last week that a troop withdrawal was not even up for discussion with North Korea.

North Korea may instead be offered the security guarantee of a peace treaty which formally ends the Korean War. Moon and Kim have already made a declaration at their Korean summit that a peace treaty should be signed this year. That would require the cooperation of the US.

If Moon travels to Singapore on Tuesday – which is not yet confirmed – it is a good indication that a peace treaty can be signed, says Andray Abrahamian, a fellow at Griffith University's Asia Institute and member of the US National Committee on North Korea.

Trump said on Friday that signing a peace treaty at the summit would be a “first step”.

"It's what happens after the agreement that really is the big point," he said. "Normalising relations is something that I would expect to do, I would hope to do, when everything is complete."

But will Kim, who appears to have been consulting closely with China, demand more from the US as the price of giving up his nuclear program? If he does not demand a withdrawal of US troops from the Korean Peninsula, then perhaps the removal of the controversial THAAD anti-missile shield? THAAD is hated by Beijing, which says Washington is using it to spy deep into Chinese territory.

In the lead-up to the summit, the Trump administration's focus has been on the economic carrot it is prepared to offer North Korea to build its economy if it gives up the nuclear program.

Abrahamian, who most recently travelled to North Korea in April, says: "Kim Jong-un is definitely much more interested in the economy than his father was. He has taken significant steps to create efficiencies in the economy, to make it easier to open companies, increased the role of the market and forced state-owned enterprises to run on market principles."

A change to North Korea's official national policy in recent weeks to focus on the economy, publicly ending the previous dual strategy of building the economy and a nuclear weapons program, was "an explicit sign they are willing to make a deal".

But he cautions: "I don't think they will give up everything they have developed. It will be a slow process."

The head of the East Asian Bureau of Economic Research at the Australian National University, Peter Drysdale, ran a program that trained North Korean officials in market economics. It was started after the first Framework Agreement to freeze North Korea's nuclear program was agreed with the US in 1994.

"It was derailed by John Bolton when he became US ambassador to the UN and closed down the UNDP office in Pyongyang through which we had organised the program. The [George W. Bush] "Axis of Evil" strategy led to diplomatic closedown," Drysdale recalls.

He says there has been quite a lot of economic reform in North Korea in the past decade, but under extreme UN sanctions and cut off from the world, North Korea is unable to capture the real benefits of market reform.

"The opportunity for success with a large-scale economic reform agenda has to be the major payoff for Pyongyang from a settlement with the United States and its allies," he says.

Trump is right to say opening the North Korean economy to global engagement will deliver huge benefits to the people of North Korea, Drysdale says, but he adds that Trump is "really promising other people's money: Japan, China, South Korea."

He won't be in Singapore on Tuesday. Accompanying Trump will be Secretary of State Mike Pompeo, who has made two trips to Pyongyang to meet Kim, chief of staff John Kelly and Bolton.

Bolton's presence, even if he isn't in the meeting room, adds another wild card.

The summit was briefly derailed after Bolton, a long-time North Korea hawk, demanded complete denuclearisation up front, before any concessions could be granted to North Korea. Many North Korea watchers said this was unrealistic. 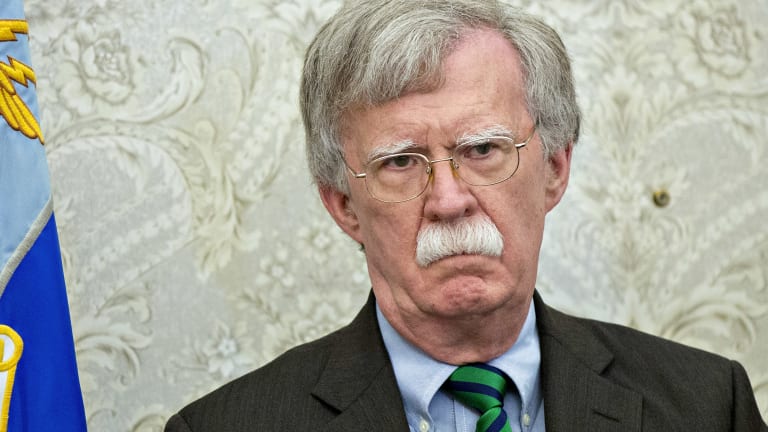 It is difficult to predict anything from an erratic White House where Trump's inner circle has seen high turnover. But Abrahamian believes Bolton recently "going quiet" shows Trump has come around to the idea of a more gradual process.

Trump says he could offer a second meeting with Kim at the White House if the Singapore summit goes well.

Zhang Liangui, a retired Korea expert from China's Central Party School, is pessimistic about denuclearisation being achieved because he sees that Trump's determination is "gradually retreating" by removing firm deadlines.

"This would make the denuclearisation like the six-party talks, which went nowhere in the end after five to six years of talk," said Zhang.

Leonid Petrov, a North Korea expert at the Australian National University, says the spate of bilateral leaders' meetings this year between Kim and Xi, Kim and Moon, and now Kim and Trump, have been a major breakthrough in how the world deals with North Korea's nuclear weapons. He said this is "much more productive" than the failed multi-party talks of past decades.

"Even if the summit is called off, or they meet and walk away, they can resume … They can have a glass of champagne. It is better than nuclear armageddon in north-east Asia," Petrov says.