Amirali Hajizadeh, head of Iran’s Revolutionary Guards’ aerospace division, boasted to the Iranian Students’ News Agency: “An aircraft carrier that has at least 40 to 50 planes on it and 6,000 forces gathered within it was a serious threat for us in the past but now… the threats have switched to opportunities. If the Americans make a move we will hit them in the head.” His words come shortly after an Iranian leader warned US President Donald Trump the US fleet dispatched to the Persian Gulf will face “dozens of missiles” if it “attempts any move”, raising the prospect of a direct, explosive military confrontation.

And US officials have said there was an “increasing possibility” of Tehran or its regional proxies launching strikes against US commercial ships including oil tankers as the situation continues to deteriorate.

The ISNA news agency quoted hardliner Ayatollah Tabatabai-Nejad in the city of Isfahan as saying: “Their billion-dollar fleet can be destroyed with one missile.

“If they attempt any move, they will face dozens of missiles because at that time government officials won’t be in charge to act cautiously, but instead things will be in the hands of our beloved leader Ayatollah Ali Khamenei.”

In the latest tense exchange between Tehran and Washington, Iran’s hardline Revolutionary Guards separately said Iran would not negotiate with the United States, a stance likely in part to be intended to discourage Iranian President Hassan Rouhani and his moderate allies from taking up a US offer of talks. 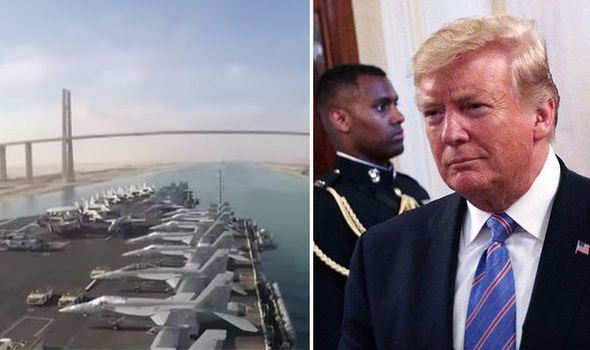 Mr Trump on Thursday urged Iran’s leaders talk with him about giving up their nuclear program and said he could not rule out a military confrontation.

Trump made the offer as he increased economic and military pressure on Iran, moving to cut off all Iranian oil exports this month while beefing up the US Navy and Air Force presence in the Gulf.

Acting US Defense Secretary Patrick Shanahan approved a new deployment of Patriot missiles to the Middle East, an official said on Friday.

The US aircraft carrier Abraham Lincoln, deployed as a warning to Iran, passed through Egypt’s Suez Canal on Thursday and American B-52 bombers have also arrived at a US base in Qatar, US Central Command said.

Iran has dismissed both moves – which the United States said it took after US intelligence signaled possible preparations by Tehran to attack U.S. forces or interests – as “psychological warfare” designed to intimidate it.

In an advisory posted on Thursday, the US Maritime Administration (MARAD) said that since early May there had been an increased possibility of Iran or its regional proxies taking action against US and partner interests.

These included oil production infrastructure, after Tehran threatened to close the vital Strait of Hormuz chokepoint through which about a fifth of oil consumed globally passes.

US-Iranian tensions have risen since Mr Trump withdrew a year ago from a 2015 nuclear deal with Iran and major powers and began ratcheting up sanctions to throttle Tehran’s economy, and these were further tightened this month.