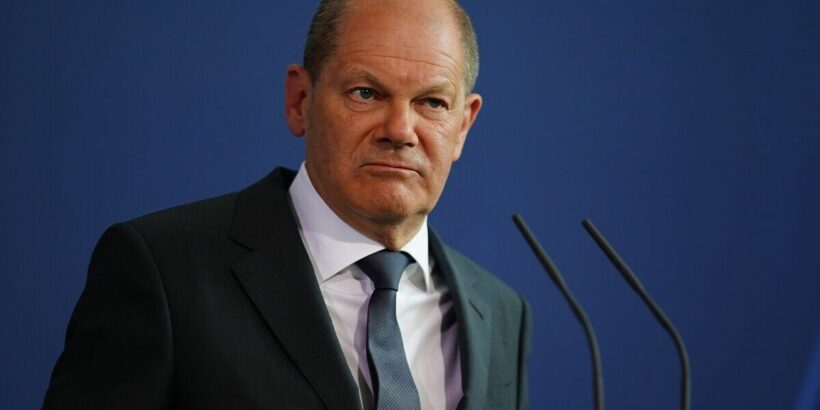 Berlin has come under intense pressure, including from members of the Chancellor’s ruling coalition, to increase military support to Kyiv by sending heavy arms such as tanks, with a key figure among Germany’s Greens urging the Bundestag to stop “putting the breaks” on aid.

Despite Mr Scholz’s pledge to coordinate more weapon deliveries to Ukraine to ensure it can fend off Russia’s invasion, national and international frustration over his leadership on the war is growing.

Green MP Anton Hofreiter, the chair of the Bundestag’s European Affairs Committee, said Germany’s approach is dangerous, as its reluctance in taking a harder stance in the conflict could prolong the war and result in other countries being invaded.

And the longer the war drags on, the greater the danger “that further countries will be invaded and we will end up sliding into an extended de facto Third World War”, Mr Hofreiter alerted as he called for a quick delivery of tanks to Ukraine.

His remarks come as Germany announced it will provide Ukraine with ammunition and training for heavy artillery.

The training and ammunition are for the PzH 2000, a self-propelled, rapid-fire artillery system the Netherlands is sending to the war-torn nation, according to a senior government official.

The official, who asked not to be identified, told Bloomberg the training could be provided either in Poland or Germany, but not in Ukraine because of ongoing attacks from Russia.

German Foreign Minister Annalena Baerbock, who has led calls for heavy weaponry for Ukraine, confirmed on Wednesday during a trip to Riga, Latvia, “if partners deliver artillery that we can no longer deliver, we will help with training and maintenance”.

But according to Mr Hofreiter rather than providing training Berlin could deliver tanks that it does not urgently need and replace them with new ones from the arms manufacturer Rheinmetall.

He said: “Rheinmetall itself says that they have a whole series of Marder tanks that could be delivered in a very short time.”

Further, the Green politician rejected the argument put forward by Mr Scholz, among others, that Germany’s possibilities to supply weapons were limited because the Ukrainian army was not trained in modern weapons systems.

Stressing the “heroic resistance” shown by Ukrainian servicemen, he claimed: “I find it a bit paternalistic to tell the Ukrainian military ‘you can’t handle it’.”

Mr Hofreiter’s view on Mr Scholz’s government is no secret.

Last week, he bluntly said: “The problem lies in the chancellory.

“We have to finally start supplying Ukraine with what it needs, and that’s heavy weapons.”

Speaking to national broadcaster Deutsche Welle, he added: “I can only speculate why the Chancellor is stepping on the brakes like this.

“I can see no logical reason for it. But with his actions, the Chancellor is not only damaging the situation in Ukraine, but he is also massively damaging Germany’s reputation in Europe and the world.”

However, Mr Hofreiter, a leading figure on Germany’s left, did support the government’s idea that Eastern European countries deliver familiar Russian and Soviet weapon systems to Ukraine and that Germany fills the gaps with modern material.

At the same time, he emphasised Ukrainian forces must be trained in modern equipment ahead of “when the Russian and Soviet material is shot to pieces”.