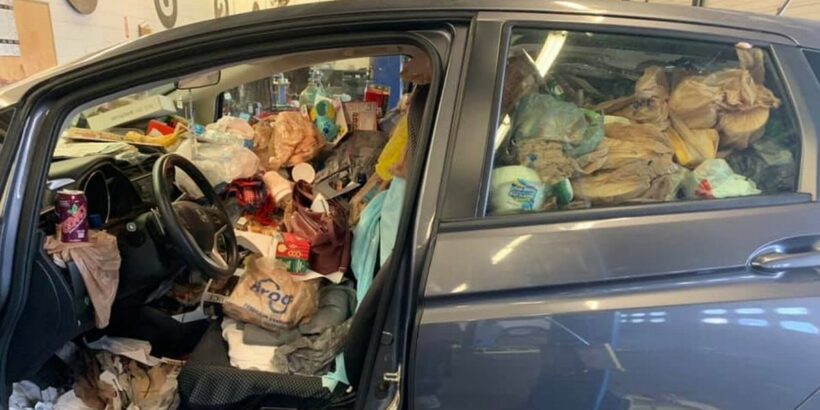 The internet is equal parts disgusted and awed by photos of what may well be the world's messiest car.

Images of the grey Honda parked in a repair shop show every seat but the driver's piled high with McDonald's packaging, carrier bags and pieces of paper.

The junk reaches the car roof in some places, raising questions about how the owner could even get inside let alone see out the windows.

Due to the placement of the steering wheel on the left-hand side of the dashboard, the Honda would appear to belong to an American driver.

An Indiana man uploaded the photos to Facebook but he does not appear to be the owner of the vehicle. "Can't even make this up," he wrote in an accompanying caption.

"How do you not get fined or a citation for this crap? Hoarders on A&E come get your people."

Hoarders is a popular American television programme in which people who struggle with a hoarding addiction reveal how the habit is ruining their lives and get help from professionals. The shocking post has so far racked up thousands of shares, likes and comments by users who can't believe their eyes.

"What a pig," one Facebook user wrote in response.

Another added: "It is a hoarder car for sure!"

"Makes me sick," a third remarked.

The NHS defines a hoarding disorder as when someone acquires an excessive number of items (typically of little or no monetary value) and stores them in a chaotic manner, resulting in "unmanageable amounts of clutter".

The behaviour is considered a significant problem if the clutter interferes with the person's everyday life such as blocking access to parts of their home, or if it's causing significant distress to them or their family. "Hoarding disorders are challenging to treat because many people who hoard frequently do not see it as a problem, or have little awareness of how it's affecting their life or the lives of others," the NHS says on its official website.

"Many do realise they have a problem but are reluctant to seek help because they feel extremely ashamed, humiliated or guilty about it."