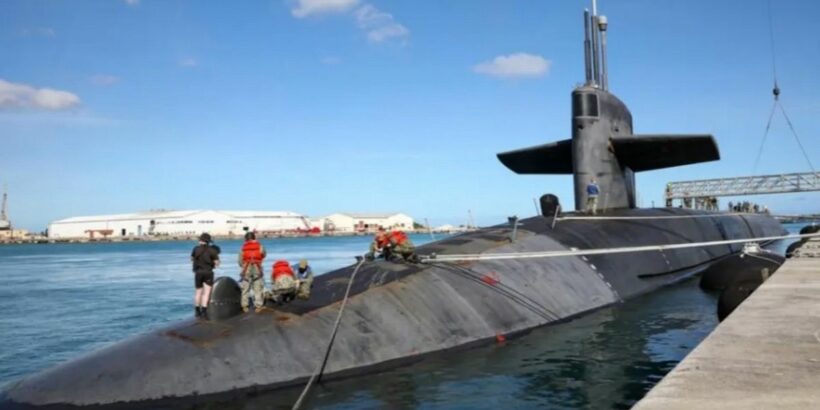 A nuclear submarine belonging to the US Navy has been spotted for the first time in decades, sparking WW3 fears as the US responds to North Korea's latest missile tests.

The top secret USS Nevada, an Ohio class vessel that usually carries 20 Trident missiles, was seen at the US naval base in Guam.

"The port visit strengthens cooperation between the United States and allies in the region, demonstrating US capability, flexibility, readiness, and continuing commitment to Indo-Pacific regional security and stability," a US Navy statement read.

Thomas Shugart, a former US Navy submarine captain and now an analyst at the Center for a New American Security, told CNN that the submarine's presence sends a "message".

He said: "We can park 100-odd nuclear warheads on your doorstep and you won't even know it or be able to do much about it."

It was the first time one of the submarines – nicknamed 'boomers' – had visited Guam since 2016, and the second such visit since the 1980s.

The US Navy's 14 boomers typically operate on 77-day long clandestine patrols. Their locations are top secret and it is extremely rare to spot one outside of their home ports of Kings Bay, Georgia, and Bangor, Washington.

This news came in the wake of several missile tests in North Korea.

On Tuesday this week Kim Jong-un's rogue nation fired two Russian-style ballistic missiles from Sunan airport at 8.50am and 8.54am, flying at an altitude of 42 km.

The country's tyrant leader was also pictured overseeing the test, which was North Korea's fourth weapons launch this year.

One of this year's tests even involved a deadly hypersonic missile, capable of Mach 10 speeds.

US officials responded by calling on North Korea to “cease its unlawful and destabilising” weapons activity.

There are also tensions brewing between the US and China over the situation in Taiwan, as well as Beijing’s development of its own nuclear submarines.

He said: “We need to discard Cold-War mentality and seek peaceful coexistence, and win-win outcomes."

He added: “Our world today is far from being tranquil – rhetoric that stokes hatred and prejudice abound.

“Acts of containment, suppression or confrontation arising thereof do all harm, not the least good, to world peace and security.”