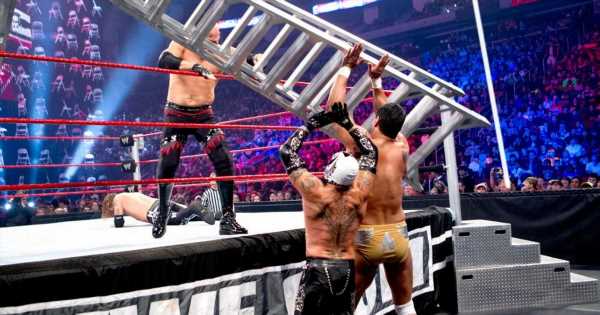 WWE has seemingly axed a long-running pay-per-view from its annual schedule just months before it was due to take place.

Vince McMahon's company has rarely been busier than they are now, with weekly television, monthly pay-per-views and a packed live event schedule all on the go.

The company head over to the UK in just a few weeks time for a multi-date tour of cities in England – their second trip to these shores in as many months after a small tour hit the likes of Glasgow and Cardiff in September.

Before then, WWE stars will also make the lengthy trek to Saudi Arabia for its Crown Jewel spectacular, with Becky Lynch, Roman Reigns and Brock Lesnar all slated to appear. With the end of 2021 and the beginning of 2022 looking so hectic, it's little surprise that the company appears to have acted to ease its bulging schedule.

It looks to have come at the expense of one of its most recognisable pay-per-view events, too, with the 2021 edition of TLC: Tables Ladders and Chairs given the boot, according to a new report.

Rather than squeeze Crown Jewel, November's Survivor Series and December's TLC all in before the festive period, Dave Meltzer of the Wrestling Observer Newsletter has stated that the latter will be dropped from the list.

"The answer is that there is no pay-per-view."

While the move to allow talent and storylines more time to breathe and develop at a busy time of year will ultimately be welcomed by many, it would if confirmed end a 12-year run for the gimmick event.

Randy Orton, CM Punk and AJ Styles have all headlined the show since then, with the last edition in 2020 featuring Bray Wyatt and Randy Orton in an Inferno match.