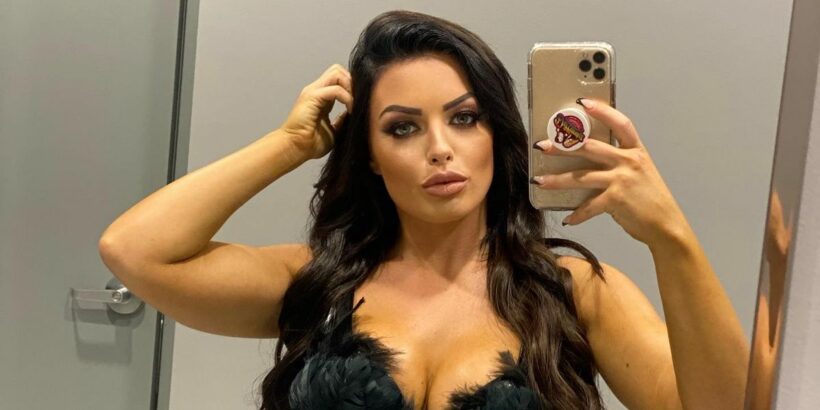 Life in the ring is tough for WWE's NXT Women's champion Mandy Rose – and she's taken to Instagram to show off her body preservation routine.

Posting to her 3.1 million followers on Instagram, the 31-year-old New York native videoed herself in a six degree cold tub, wearing a skimpy pink bikini.

She was doing it to heal her body after a gruelling match on WWE's NXT 2.0 show on Tuesday where she defended her women's championship against Dakota Kai.

Later in the video, in which she appeared to be very, very cold, she also showed off her pet pooch, a Golden Poodle named Penny Lane Rose – a nod to The Beatles.

Mandy bought the dog last year while nursing an injury she suffered in November 2020 after former WWE star Nia Jax failed to throw her out of the ring properly.

She ended up hurting her shoulder and was out for a long period.

Before the injury incident, Mandy, whose real name is Amanda Rose Saccomanno, was known as a blonde-haired beauty – almost goddess-like in her appearance – and while she possesses good in-ring ability, she was utilised more for other assets she possesses.

Having made only sporadic appearances on the WWE main roster after the injury, she turned up in NXT with dark brown hair and formed the sultry all-female group Toxic Attraction alongside Gigi Dolin and Jacy Jayne.

The pair were known on the independent scene as Priscilla Kelly and Avery Taylor, respectively.

The former hit headlines in in December 2018 when she pulled a “bloody tampon” out of her tights and stuck it into her opponent Tuna's mouth during a match for the Suburban Fight promotion in Los Angeles.

She tweeted: “I’m seeing this post of a women’s match that got disgusting and I’m not gonna repost it Bc it’s seriously a disgrace (sic).

“Why??? Whoever thought that was a spot that was gonna get a pop and was worth it…..NO.

“How about telling a story in the ring with your wrestling instead?”

However, the trio have changed names and looks and are at the top of the NXT tree, as the duo of Gigi and Jacy are also NXT 2.0 women's tag team champions.

Mandy's wrestling journey started out when she appeared on the six series of WWE's reality competition Tough Enough in 2015.

She was, at the time, favourite to win but somehow lost to underdog Sara Lee – who quickly left WWE after her one-year contract expired and hasn't stepped foot in a ring since.

However, Mandy signed a five-year contract with WWE after the show, and has remained a mainstay of WWE television ever since, including being a main cast member for the company's other reality show Total Divas.

Before stepping into the squared circle, she won the World Body Building Fitness and Fashion competition in 2013, and the Diva Bikini Pro World Championships in 2014.

She was ranked 67 th in Pro Wrestling Illustrated's top 100 female wrestlers of 2019.