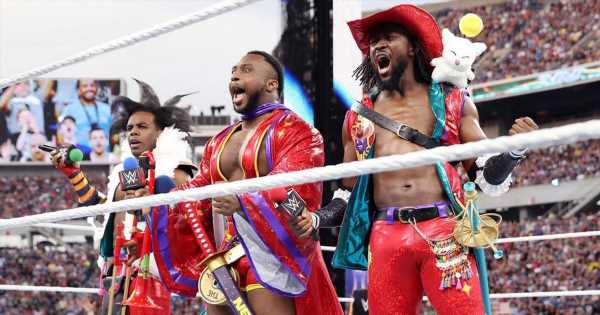 King Woods has spoken out about his creative frustrations in WWE that led to the formation of The New Day – one of the greatest teams of all time.

Woods is famed for being one of the legendary trio and is himself the recently-crowned King of the Ring – even despite a recent beating at the hands of Roman Reigns.

His New Day allies are Big E, currently WWE Champion and Kofi Kingston, a former WWE Champ and one of the most decorated stars of all time.

Their respective accolades are impressive enough, yet they probably pale in comparison to their incredible record as a tag team – with title reigns numbering double figures.

Despite their unbelievable achievements, Woods has explained to Daily Star Online that the group’s formation was built on disappointment and frustration.

At Extreme Rules in 2014, Woods found himself side-lined from a mid-card triple-threat match involving R-Truth and Rusev, while babyface Big E was booed out of the building in losing his Intercontinental title to Brit Wade Barrett.

It proved to be something of a watershed night for both them and Kingston, with Woods taking the early parts of the idea for The New Day to Big E.

But far from pitching an idea that would eventually leave each of the three men as top stars in the wrestling industry, the 35-year-old admitting: “Honestly, I was just trying to figure out a way for us to not get fired.

“That was it. I wanted to do something.

“It was the same night, at Extreme Rules, I had a handicap match with me and Truth against Rusev.

“Before the match Rusev ran me into a hard part of the ring and took me out and had a match with Truth.

“I was like ‘I’ve been here a month, and this is already happening to me – I’m not satisfied mentally, creatively.’

“Getting out of developmental was one of the hardest things in the world for me so I was just happy to be out and thought ‘finally, I’m gonna get to do some stuff’ and it was like ‘No, no you don’t.’

“I was in a bad way mentally and was kind of rough. That night, I just went up to E and explained how I felt.

“He and I were pretty cool up to that point and I had been cooking up the idea, and I took it to him and he was like ‘yeah, I’m clearly not going to be doing anything anytime soon so let’s take a shot!”

The duo in turn steered the idea to Kingston – who Woods says was bordering on disillusion with his own WWE spot despite some notable achievements and moments.

That was seemingly all it took, as the trio combined his idea – and the desire to have more fun in their careers – and ran with it.

Woods went on: “We talked to Kofi, and he was in that spot where he was having good matches with people every week but it would just never amount to anything.

“There’s only so many times you can do that before it becomes a situation where you want more for yourself.

“So, I think Kofi was kinda done, and he’d had a great run until then – a legendary run – before New Day.

“This was something that we were hoping that would spark a new life and a new fire in each of us, and it very much did, because we were having fun – that was the basis of all of it, having fun.”

Tickets to WrestleMania 38, the most stupendous two-night WrestleMania in history, are on-sale now. Including Travel Packages for April 2022.