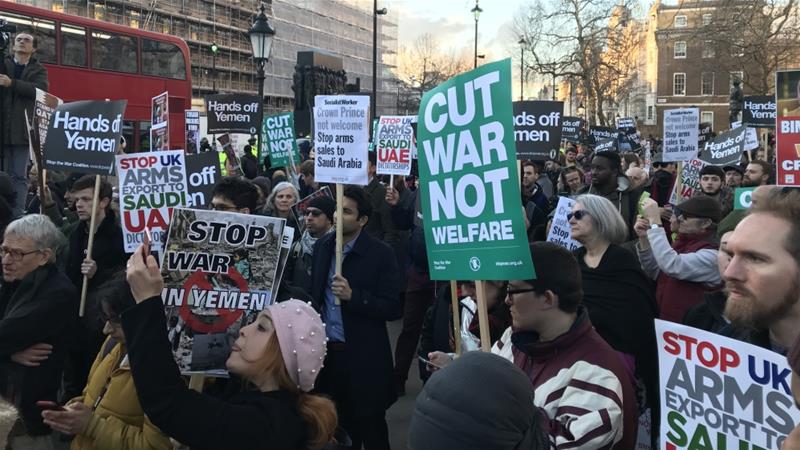 London, England – The international community, including Britain, must load pressure on the Saudi-led coalition in Yemen to avoid further bloodshed, a Yemeni politician told a conference in London on Saturday.

Abdulrahman al-Hamdi addressed delegates the day after Mohammad bin Salman, the kingdom’s 32-year-old crown prince accused by activists of being the “architect” of the Yemen conflict, left the UK having signed further deals with Britain, with Downing Street announcing plans to sell 48 Eurofighter Typhoon jets to Riyadh.

The world should “assert more pressure on the allied forces. A military solution to the conflict in Yemen will be a disaster”, said al-Hamdi, a former member of the Yemeni parliament who was ambassador to the Czech Republic from 2009 until 2014.

Al-Hamdi served mostly under Ali Abdullah Saleh – the president who stepped down and fled to Saudi Arabia following protests in 2011, and who was killed by Houthi rebels in December last year in Yemen.

“History is repeating itself. There is a history of Saudi intervention in Yemen, from the revolution in 1962 to the 1994 Yemeni civil war,” said al-Hamdi at the event, which was hosted by the Cordoba Foundation and titled Yemen: War, Politics and Human Tragedy event.

“Yemen is being destroyed. A nation is dying,” said al-Hamdi.

The controversial three-day visit by the Saudi crown prince, also known as MBS, drew criticism from some sections of the British public, with protesters calling for his arrest over his role in the calamitous war in Yemen.

Before he arrived, thousands had signed an online petition calling on Prime Minister Theresa May to cancel the trip over Saudi Arabia’s involvement in the Yemen conflict, which has killed thousands and caused what the United Nations and several countries say is the world’s worst humanitarian crisis.

When he was in London, protesters greeted MBS with chants of “hands off Yemen!”.

Al-Hamdi rejected Saudi Arabia’s claim that it was intervening to support the legitimate government of Yemen.

“In reality, all sides in this conflict are motivated by power,” he said. “Saudi Arabia is destroying all of the infrastructure in Yemen, especially military infrastructure.”

The kingdom’s involvement is taking place as part of MBS’ consolidation of power within Saudi’s ruling family, he said.

British arms companies have profited from the war in Yemen, reportedly earning more than £6bn ($8.3bn) in trade with Saudi Arabia since Saudi became involved in the conflict in 2015.

On Thursday, Downing Street confirmed that new deals were signed with the kingdom, to the tune of more than $90bn.

At the London conference, politicians, academics and campaigners joined British opposition politicians in slamming Prime Minister May for rolling out the red carpet for the Saudi prince, and for failing to criticise the kingdom’s record in Yemen.

“This is designed to curb the growth of democracy in the region,” said Bill Law, a journalist who has reported from the Middle East for the BBC.

Hugh Miles, an author and consultant specialising in the Middle East, suggested that the conflict in Yemen was quickly becoming a disaster for Saudi Arabia, as popular support in the kingdom for the war declines.

Drawing a comparison to US foreign interventions, he said: “[Yemen] is like the Saudi Vietnam”.

“The poorest country in the Arab world is being systematically destroyed by the richest.”

Several speakers said the latest developments between Saudi Arabia and the UK could be driven by fears over economic weakness after Britain leaves the European Union.

Law said: “By and large, the government got what they needed …assurances that Saudi will invest in the UK post-Brexit.”

In the kingdom, Mohammed bin Salman is credited with leading a series of social reforms, such as allowing women to drive and lifting a 35-year ban on cinemas.

However, activists say Saudi Arabia still has a poor human rights record and have warned against interpreting these reforms as heralding new freedoms.

Carol Turner, vice chair of the Campaign for Nuclear Disarmament UK, said: “It was absolutely predictable that Saudi Arabia would make the propaganda it did out of the visit, and that Theresa May would use it to sell more weapons.”

While May has defended her government’s close relationship with the kingdom by arguing that the UK played an influential role in bringing to light issues Saudi Arabia faces, delegates were not convinced by recent reforms.

“Liberalisation is a distraction from the war in Yemen … this is a strategy,” said Miles.