On Friday evening, I sat with President Trump aboard Air Force One and asked him if he thought Vladimir Putin was ‘ruthless.’

‘I can’t tell you that,’ he replied, which surprised me.

It shouldn’t be too hard to view Russia’s leader is one of the world’s most ruthless people. 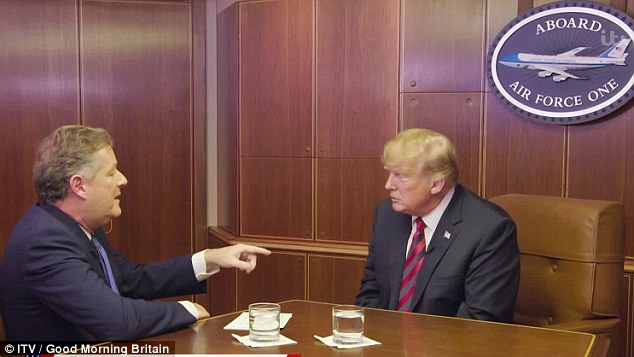 On Friday evening I sat with President Trump and asked him if he thought Vladimir Putin was ‘ruthless.’ ‘I can’t tell you that,’ he replied, which surprised me. It shouldn’t be hard 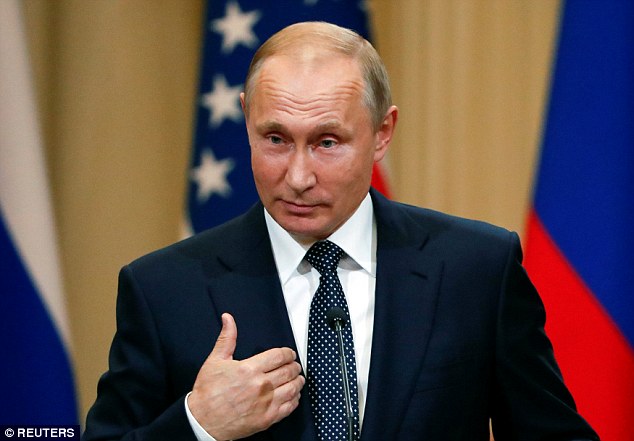 Putin, after all, is a former KGB officer whose lengthy tenure as President has been notable for outrage after outrage.

Putin also stands accused of masterminding an attempt to influence the 2016 US election through a concerted cyber campaign of meddling, hacking and planting of fake news stories aimed at damaging Trump’s rival Hillary Clinton.

This was the firm conclusion reached by all 17 of America’s intelligence agencies.

So in terms of bad guys, Putin’s right up there with Kim Jong Un and the leader of ISIS on America’s Most Wanted – and most definitely warrants the ‘r’ word.

Yet oddly, Trump was hesitant to brand Putin ‘ruthless’.

‘I assume he probably is,’ he added in our interview, ‘but I could name others also. Look, if we can get along with Russia that’s a good thing. I don’t know him. I met him a couple of times. I think we could probably get along very well. Somebody said are you friends or enemies? I said well it’s too early to say but right now I say we’re competitors but for the United States to get along with Russia and China and all of these other places…. Piers that’s a good thing, that’s not a bad thing. That’s a really good thing.’

Well, I agree that is a good thing, not a bad thing.

I would much prefer to see rival nuclear powers at peace not war, and I am pleased to see Trump get in the room with the likes of Jong-un and Putin.

But that doesn’t mean the bad guys should get a free pass for their appalling behaviour.

Nor does it mean the President of the United States should side with the bad guys in public against his own people.

In fact, it’s hard to think of a worse thing a US President could do in the eyes of his fellow Americans.

Yet that is exactly what President Trump did yesterday at his summit with Putin in Helsinki. 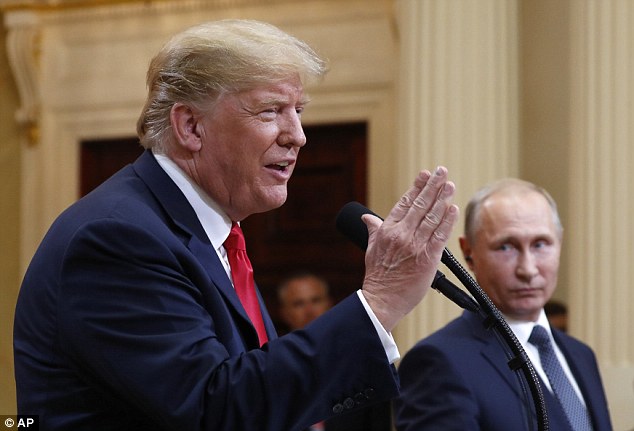 I am pleased to see Trump get in the room with the likes of Jong-un and Putin but that doesn’t mean the bad guys should get a free pass for their appalling behavior. But Trump sided with the bad people during his press conference in Helsinki, the worst thing he could do

When asked at the press conference if he believed U.S. intelligence agencies or the Russian president when it came to the allegations of election-meddling, Trump replied: ‘They (the agencies) said they think it’s Russia. President Putin just said it’s not Russia. I will say this: I don’t see any reason why it would be.’

Then he added: ‘I have great confidence in my intelligence people but I will tell you that President Putin was extremely strong and powerful in his denial today.’

By any yardstick, this was a grotesque response.

For Trump to effectively say he believes Putin over his own top American intelligence officials is an appalling betrayal.

Even more unfathomably, he doesn’t appear to understand why a man like Putin would seek to adversely influence the domestic election of his biggest rival if it got the chance?

Nor, extraordinarily, is Trump ready to doubt the word of one of the great proven liars of modern times.

I was watching US cable news TV when this press conference finished and to a man and woman, news journalists were shocked, horrified and aghast by what their President had done.

Politicians from all sides were equally stunned and angry.

Senator John McCain tweeted: ‘Today’s press conference in #Helsinki was one of the most disgraceful performances by an American president in memory.’

House Speaker Paul Ryan, a senior Republican, said there was ‘no question’ Moscow interfered in the U.S. 2016 election and that President Trump ‘must appreciate that Russia is not our ally.’ 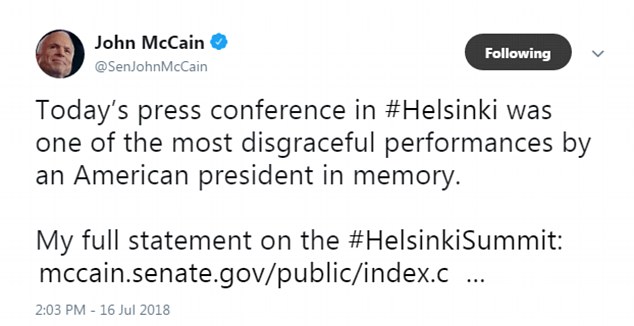 Politicians from all sides were equally stunned and angry. John McCain tweeted his horror to join the chorus that ranged from Paul Ryan to Nancy Pelosi

Democrat leader Nancy Pelosi suggested a sinister motive for Trump’s actions: ‘Every single day, I find myself asking: what do the Russians have on Donald Trump personally, financially and politically? The answer to that question is the only thing that explains his behaviour and his refusal to stand up to Putin.’

I don’t think it’s that, nor do I believe Trump ‘colluded’ with Russia to fix the election, though it would be prudent for us all to wait for the results of the Mueller investigation before saying that with total confidence.

No, I think it’s Trump’s gigantic ego that caused him to do what he did yesterday. He just doesn’t want people to think his election win was in any way delegitimised by the Russian hackers, or that Hillary would have won if the interference hadn’t happened.

He repeatedly inferred this at the press conference, angrily insisting that he won the election fair and square.

That’s why he can’t bring himself to publicly side with his own intelligence agencies against the man who ordered the meddling.

But his failure to do so was, as his Republican friend and former Speaker, Newt Gingrich said last night, ‘the biggest mistake of his presidency.’

It made Trump look unpatriotic and anti-American.

It also made him look weak. Or as Arnold Schwarzenegger put it in a taunting video message, like a ‘wet noodle.’

After the appalling recent chemical attack in Douma, Syria that killed 70 people including many children, Trump vowed: ‘President Putin, Russia and Iran are responsible for backing Animal Assad. Big price to pay!’

I wrote then: ‘Many Americans don’t like President Trump. That’s their right in a democracy. But this is the moment when they need to put aside their own sentiment about him. Trump may now be the only person who can put Putin back in his box.’

How hollow those words look today.

Yesterday’s press conference was a travesty.

Far from putting Putin back in any box, President Trump completely ignored every despicable crime he’s ever committed.

And he backed Russia against America on the issue of election interference. 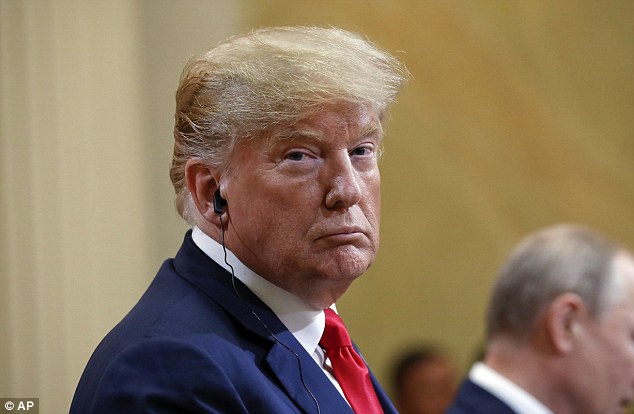 Yesterday’s press conference was a travesty. Trump completely ignored every despicable crime Putin has committed. And he backed Russia against America on the issue of election interference. Little wonder his critics were screaming ‘TREASON!’

What’s so odd about all this is that Trump’s always known how self-defeating it is to suck up to Putin.

Ten years ago, I interviewed him for British GQ magazine.

He was scathing about the way the then President George W. Bush had cow-towed to Russia’s leader, and allowed Russia to steal a march economically as a result.

‘Putin played Bush like a fiddle,’ he sneered. ‘Bush went around saying what a nice guy he was, and thought he was his friend. And I saw this going on and said, ‘watch what happens.’ And since then, Russia has gone up like a rocket and this country has gown like a not so successful rocket. (Russians) are very smart very cunning business people. Russia is really flying and that us down to Putin.’ 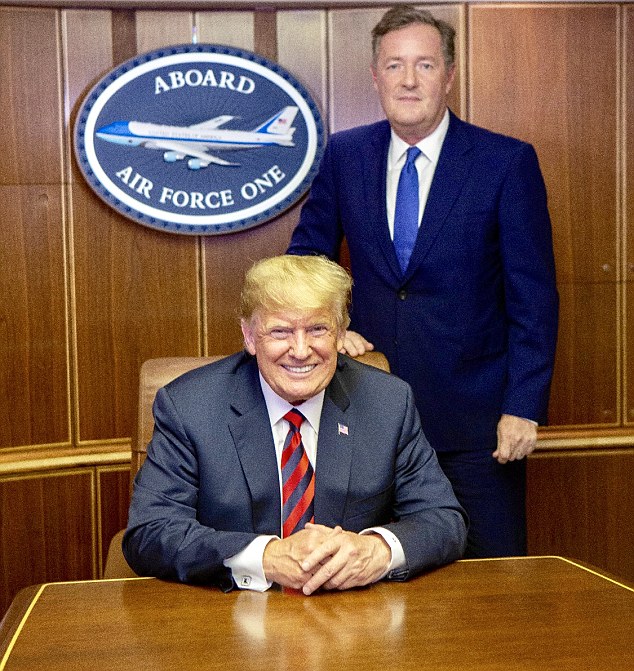 It’s bizarre because Trump’s always known how self-defeating it is to suck up to Putin. Ten years before Friday’s Air Force One sit down, I interviewed him for British GQ and he was scathing about then-President Bush’s cow-towing to Putin

Well yesterday, Putin played another U.S. President like a fiddle.

Ironically, it’s now Donald Trump who’s going around saying what a nice guy Putin is and who thinks he is his friend.

And I see this going on, and I say, ‘watch what happens.’

Putin now knows he’s got Trump right where he wants him – looking like a ‘wet noodle’.

And he didn’t even have to try that hard – Trump did all the work for him.