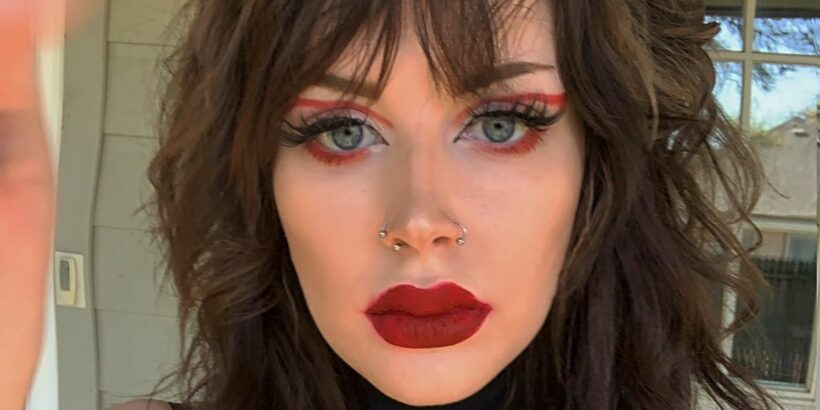 A YouTube sensation who looked happy and healthy in videos about her exotic pets slowly deteriorated into an emaciated, hive-ridden shell as she developed a spiralling heroin addiction before fans' eyes.

Taylor Nicole Dean shot to online fame thanks to a viral video in which she showed off the array of animals she kept. It drew more than 19 million views, making her an internet star.

After quitting her day job at a pet supplies firm to become a full-time vlogger, the 25-year-old from San Antonio in Texas became one of the biggest names on 'PetTube' – a YouTube niche centred on caring for exotic animals.

Dubbed 'The PetTube Queen' she now has nearly two million subscribers on her YouTube channel and is reportedly worth over 1million dollars. However, four years ago her dream turned to a nightmare when her life "fell apart" and she slipped into the grip of a destructive opioid addiction. A year later, after getting clean, she opened up about how low she got during those times saying she was "in hell and terrified."

In a lengthy 2019 YouTube video where she poured her heart out on her struggles, she said: "I always thought addiction was a choice, I really did, until I was faced with my own addiction. When your drug of choice as an addict, you can't put it down. And I didn't understand it."

In 2017, she started dating musician Jonny Craig, best known as the former lead singer of bands Dance Gavin Dance, Emarosa, and the American group then known as Slaves, now known as Rain City Drive. He is 10 years older than her.

Craig has previously spoken about his own battles with heroin addiction. And Dean, who says she has an 'addictive personality' and had previously binged on booze and cocaine as a teenager, claims she became hooked on opioids while they were living together.

It began with her crushing and snorting painkillers before she first smoked, and then eventually injected, heroin. She said the 'darkest day of her life' was when she injected the drug for the first time after her pet lizard Kronos was diagnosed with an infection.

"My first time meeting heroin was actually pretty bad," she said. "I threw up everywhere, but I liked the feeling it gave that part of my brain that's always been sick. It gave me a feeling I've never been able to find in any other substance."

She says at the height of her addiction she was shooting up every hour. "My addiction was full-blown and I was sick," she said.

"I ruined everything," she added. "And every single day I wanted to stop. Every single day I swore to myself I was going to stop but if I tried to stop I got so profusely sick. It was a pain I'd never felt in my life."

She says at one point a severe case of full-body hives broke out on her skin and she had to "cover every part of my body" for around three weeks. But "nothing logical that would stop a person from doing something would stop me," she said. "That's what addiction is."

For her legion of fans, the only clues as to what was happening were the track marks visible on her arms during her intermittent videos. "I always had to cover my arms, or wear make-up, intense make-up on my arms as my body was covered in track marks," she said.

She now admits there were "noticeable changes in my personality and on my channel."

She added: "It almost seemed fake – my personality, my happiness, and everything. It was like there this was this giant wall between me and you guys. I'm talking about an emotional wall. It's as if I was not there."

She said she eventually got clean after going to a "world-renowned" rehab centre and being prescribed medication to help her deal with her crippling withdrawal symptoms.

"They taught me I wasn't some broken, disgusting thing but that I was sick and I'm going to have this problem for the rest of my life," she said.

After being discharged she said she was having therapy and regularly attending AA meetings. She announced her split from Jonny Craig in August 2019.

In the video posted three years ago, she revealed she had moved back in with her parents and said: "I am very invested in my recovery. I am healthy now, I am in a good place which is why I'm so upbeat."

She has since documented her ongoing struggles with mental illness, whilst also becoming vocal advocate for those suffering from addictions, often sharing pictures of herself during her darkest periods, compared to how she looks now, on her social media feeds in a bid to try and inspire others to kick their habits.

In March she tweeted saying: "Addiction eats your body and soul. I don’t have room in my life anymore for this level of self-hatred.

"Regardless of how embarrassing it feels sometimes to have been publicly struggling with my mental health for years now, at least I’ll be an accurate representation that these things take time, and that it doesn’t make it pointless or mean that you should give up on your recovery."

She added last month: "If ur someone struggling with addiction I just wanted to leave a lil reminder on your timeline to say that I believe in you, and you’re not a lost cause or hopeless. you’re so much more than your addiction. keep taking things a day at a time until you believe that yourself."