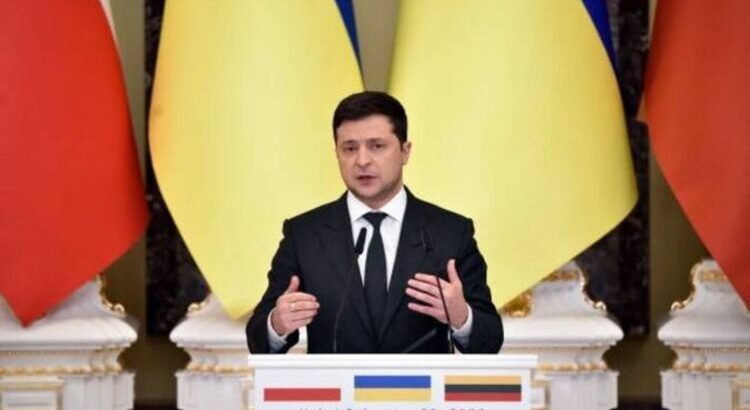 The Kyiv Independent posted a quote from Zelenskyy on Twitter in the early hours of Friday morning as Russian forces close in on Ukraine’s capital. This comes after the President urged Ukrainians to take up arms and mobilise themselves against Putin’s troops.

Writing to over 250 thousand followers, the Ukrainian media outlet tweeted: “Zelensky: Russia will have to talk to us sooner or later about how to end hostilities and stop this invasion.

“The sooner the conversation begins, the smaller Russia’s losses will be.”

President Zelenskyy has stood firm in the face of Russian threats, with Ukrainian forces continuing to defend their positions at four fronts despite being heavily outnumbered.

“They want to destroy the country politically, terminating the head of state.

“It’s foul and will never be forgiven.”

Kyiv was targeted by Russian air strikes early on Friday morning, with three people injured and one in a critical condition, reports state.

The current Ukrainian death toll is believed to stand at 137, although that may rise as Ukraine enters a second day of fighting.

Kyiv mayor Vitali Klitschko and his brother Wladimir have said that they too will take up arms to defend their country.

Ukraine’s Foreign Minister tweeted that the last time Kyiv had “experienced anything like this was in 1941 when it was attacked by Nazi Germany”.

He continued: “Ukraine defeated that evil and will defeat this one.