Premier Daniel Andrews, long a grim figure bringing bleak news, was visibly moved as he announced the first day with zero COVID infections since what felt like forever, but was actually June 9.

A fair proportion of Melbourne’s population, it is fair to assume, was emotional right along with him.

It is late October now. All those days and weeks and months of pain and false hopes and loss of jobs and income. And death. 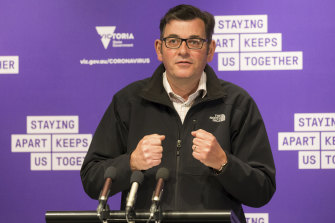 The judgments and blame on how this all happened can wait for now.

It is a time, as Andrews said, for Victorians to congratulate themselves on their courage, compassion and character.

Finally, there was a pay-off.

Retail and restaurants, pubs, cafes and bars would reopen, within limits. Staff, stood down for so long, could hurry back to work immediately to prepare for the openings. Although the details are unclear on exactly how or when or who, it looks like families and friends could soon gather again beyond two households huddled at a picnic bench.

Reports that Daniel Andrews had broken Victoria’s heart at the weekend turned out to be premature though plenty of spirits had long been sagging.

What Andrews asked on Sunday was for a “cautious pause” to ensure there wasn’t a COVID bushfire burning unseen. He wanted to see the data on the latest testing after a break-out in the northern suburbs.

Turns out he was right to do so. Within 24 hours, the figures were in. And the figure was zero.

Victoria’s heart was not broken. For the first time in months, hearts soared. A TV camera caught the mood during Monday morning when the manager of a Melbourne supermarket announced that figure of zero. Shoppers cheered.

In Canberra, carefully rehearsed Dorothy Dixer questions had been framed during the day to allow Treasurer Josh Frydenberg to twist the dagger on Andrews, pointing out – again – how Victoria was dragging down the national economy.

Victoria-baiting has become a habit among federal government figures who not so long ago were declaring “we are all in this together”. It is many weeks now since Prime Minister Scott Morrison said, “we are all Victorians”.

Today, however, it is true.

We are all Victorians. We have, in the face of mighty blunders and dreadful tragedy, suffered long and endured.

We are all Victorians. We have, in the face of mighty blunders and dreadful tragedy, suffered long and endured.

Daniel Andrews, whatever you may think of him, and whatever the months of reckoning to come for businesses and lives knocked sideways, deserved his emotional day on the podium, wearing the daggy North Face jacket he wears for special occasions. For him, suit and tie were for the worst days during the deep winter.

“This has been a very difficult year, and Victorians have given a lot, and I’m proud of every single one of them,” he declared, the voice wavering the tiniest bit.

“I don’t know that I’ll be drinking a beer tonight. I might be going higher up the shelf.”

For once, he won’t be alone.