Harare: Zimbabwe imposed a "total internet shutdown" for most of Friday in what critics called an attempt to hide growing reports of a violent crackdown on protests against a dramatic fuel price increase. Badly injured people streamed into a hospital in the capital, and rights groups said at least 12 people have been killed this week.

Gasoline in the economically shattered country is now the world's most expensive, and since Monday Zimbabweans have heeded a nationwide call shared on social media to stay at home in protest. Others took to the streets. Since then, graphic reports have emerged of security forces targeting activists and labor leaders while the government of President Emmerson Mnangagwa blames the opposition for the unrest.

"Our country is going through one of the most trying periods in its history," the Zimbabwe Catholic Bishops' Conference said, lamenting the government's "intolerant handling of dissent" and its failure to halt economic collapse. 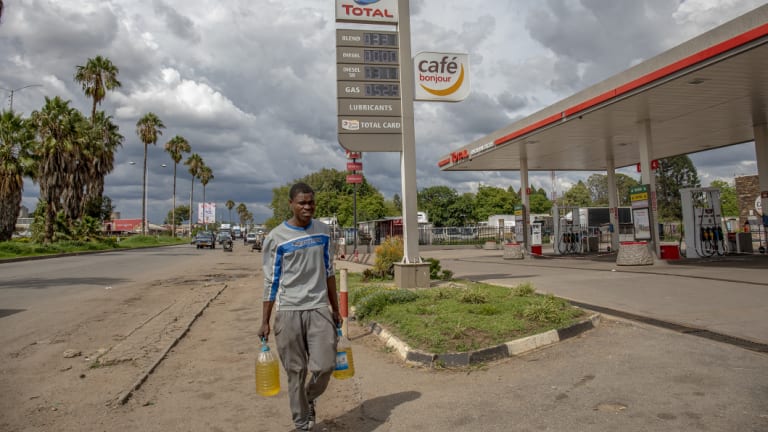 Access to the internet and popular social media apps such as Facebook, Twitter and WhatsApp has been intermittently blocked as the country's largest telecom company, Econet, sends customers text messages relaying the government's orders and calling the situation "beyond our reasonable control".

The shutdown has cut off crucial access to the electronic bank deposits that Zimbabwe's struggling government, without a national currency, uses to pay teachers and other public workers. Some people said they stayed home this week because they were running out of money to afford even a bus fare.

As the few shops that are open run out of basic necessities such as bread, hungry Zimbabweans who have ventured out in search of food risk confrontations with security forces. 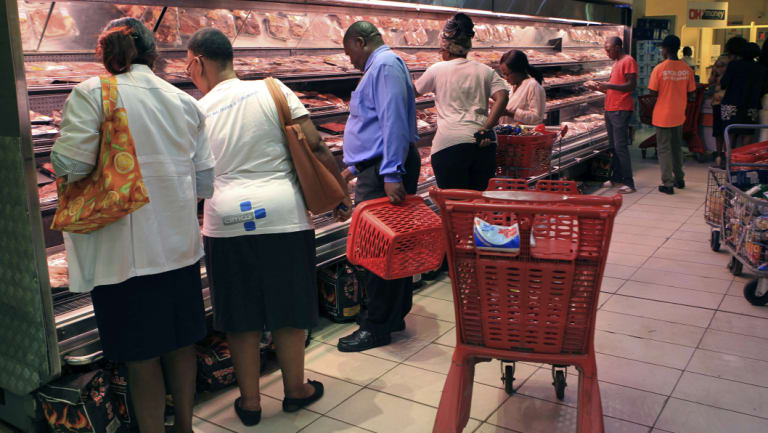 Zimbabweans buy various goods after some shops opened in Harare on Friday.Credit:AP

More than 600 people have been arrested, among them a prominent pastor and activist, Evan Mawarire, who has supported the protests on social media and faces a possible 20 years in prison on a subversion charge.

Mawarire called it "heartbreaking" to see the new government acting like that of long-time former leader Robert Mugabe, whose repressive regime also charged Mawarire with subversion. A magistrate on Friday told Mawarire, accused of inciting civil disobedience online, that he must stand trial. He remains in detention through the weekend.

More than 400 people arrested across the country have been denied bail, said Mawarire's lawyer, Beatrice Mtetwa. "It is quite clear that there is a coordinated, deliberate orchestrated attempt to subvert justice," she told reporters. 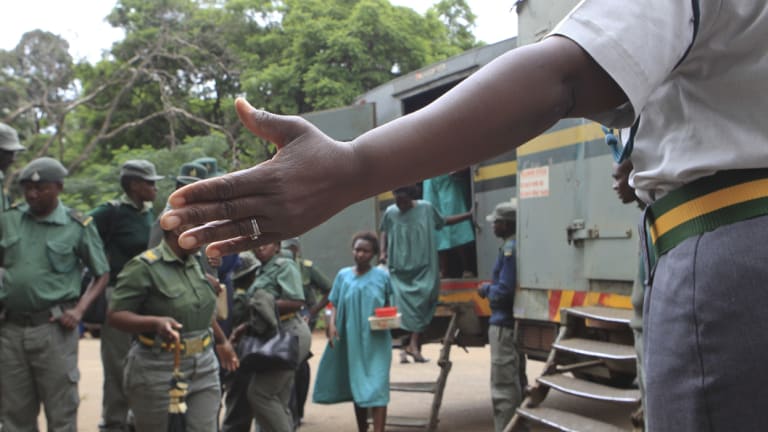 A prison guard directs some of the people arrested during protests as they arrive to make their magistrates court appearance on Thursday.Credit:AP

International calls for restraint by Zimbabwe's security forces are growing, while Mnangagwa prepares to plead for more investment at the World Economic Forum in Davos, Switzerland.

At UN headquarters in New York, UN Secretary-General Antonio Guterres said he was worried about "the deterioration of the situation".

Zimbabweans had briefly rejoiced when Mnangagwa succeeded Mugabe, who was forced out in late 2017, thinking the new president would deliver on his refrain that the country "is open for business". But frustration has reached new highs as Zimbabweans sleep in their cars in hours-long fuel lines that have replaced hours-long bank lines as the country's symbol of despair. 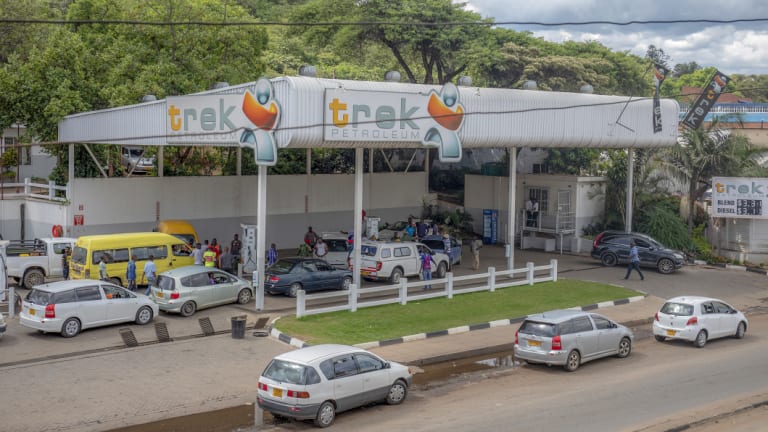 Customers queue for petrol at a gas station in Harare. Credit:Bloomberg

For the second time since Mnangagwa took office, the military is in the streets to put down protests – a sight rarely seen during Mugabe's 37-year rule.

In addition to the 12 people killed this week, at least 78 have been shot and more than 240 have faced "assault, torture, inhumane and degrading treatment", the Zimbabwe Human Rights NGO Forum said Friday in a statement called "Days of Darkness in Zimbabwe". Children as young as 9 have reportedly been tortured as security forces break into private homes, it said.

The UN human rights office urged Zimbabwe to stop the crackdown, noting reports of intimidating door-to-door searches by security forces. The Crisis in Zimbabwe Coalition said soldiers on Friday had taken away the mother of its national chairman, saying they were looking for her son.

"We are worried about her life," the group said. "The ruling party's obsession with power has led to the militarization of the Zimbabwean state."

The Zimbabwe Association of Doctors for Human Rights said it has treated more than 100 cases of "assaults with sharp objects, booted feet, baton sticks" and more.

People with broken legs and other injuries have streamed into a private hospital in the capital, Harare. 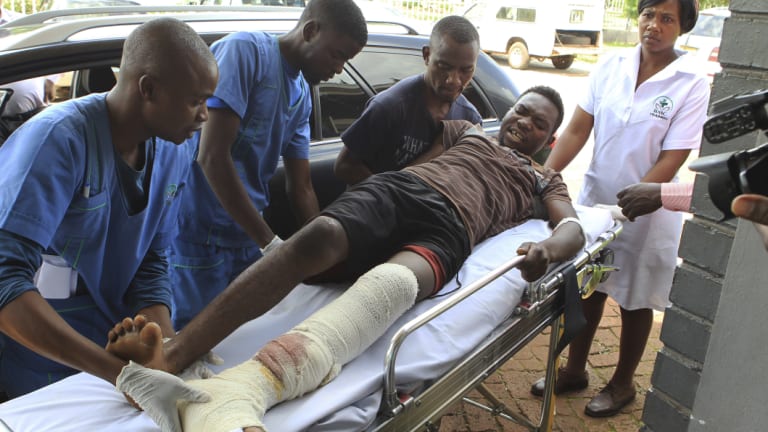 An injured man is helped at a private hospital after an alleged assault by a group of uniformed soldiers.Credit:AP

One nurse attended to a man with a broken spine. Albert Taurai told The Associated Press he had gone out to look for bread when plainclothes officers wearing masks beat him up, accusing him of barricading roads.

Keith Frymore, a 21-year-old security guard, had a torn lip. He told the AP a group of uniformed soldiers attacked him at work.

Other Harare residents who ventured out seeking food have reported being tear-gassed by police. Soldiers still controlled the long fuel lines in the capital on Friday, and many wary residents stayed at home.

In the only death toll Zimbabwe's government has issued this week, it said one of the three people killed was a policeman stoned to death by an angry crowd.

The demonstrations amount to "terrorism," Information Minister Monica Mutsvangwa said, blaming the opposition. But among those arrested have been several ruling ZANU-PF party community leaders as well as a soldier and a police officer.