Maybe it's the elephant's genes that never forget.

In addition to having great memories, elephants are known for having a very low incidence of cancer. In what might seem a wild mash-up of the SyFi channel and National Geographic, new research has uncovered a surprising factor that protects elephants against the dread disease: a gene that had gone dormant in their mammalian ancestors, but got turned back on as their evolving bodies grew ever bigger. 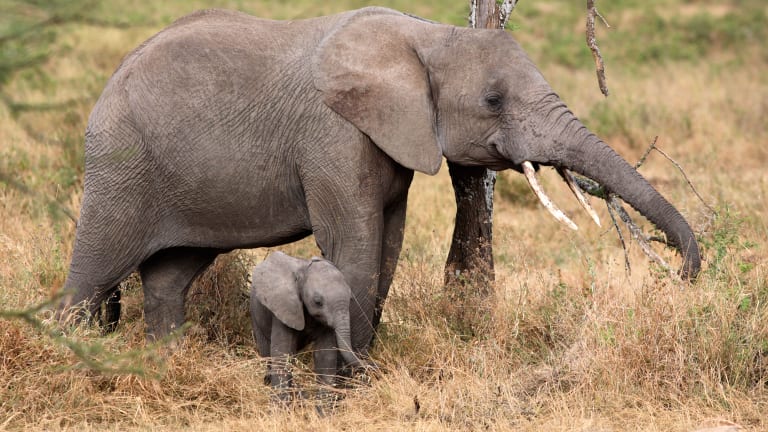 An African elephant and her calf in Tanzania.

Scientists call it a "zombie gene" – cue the chilling music here – "a reanimated pseudogene that kills cells when expressed."

The zombie gene is not just a curiosity.

Along with elephants, several kinds of whales as well as bats and the naked mole rat share enviably minuscule rates of cancer. Biologists suspect that each of those species has evolved a different strategy to ward off malignancies, and they want to understand them all. In time, they might find ways to approximate those strategies in humans and drive down our vulnerability to cancer.

"That's not easy," said Vincent Lynch, who led the research published this week in the journal Cell Reports.

Nor, he added, would it always be safe. After all, mechanisms that thwart fast-growing cells or turbocharge cellular-repair machinery have evolved over countless generations in fine balance with other checks and balances, Lynch said. Transfer one of these mechanisms willy-nilly to another species, and it would very likely run amok, he said.

"But if you don't do the research, you'll never know," added Lynch, a geneticist and evolutionary biologist at the University of Chicago.

So Lynch's team went looking for LIF (short for Leukemia Inhibiting Factor) genes in 53 mammals, including the African elephant, the bowhead and minke whales, bats and naked mole rats.

In most species, they found a single active LIF gene. But in the modern African elephant – as well as in the manatee and the rock hyrax, both distant cousins of the elephant – they found between seven and 11 additional copies of the LIF gene, called pseudogenes.

In every species but the elephant, these LIF genes and their extra duplicates were inactive: That is, they didn't turn on or off to produce proteins. If they had been active in the past, their function had been phased out. In the march of evolution, they had fallen by the wayside and been left for dead, like vast stretches of every species' genomes.

But in the elephant, Lynch and his colleagues saw that one of the additional copies of the LIF gene was active. When the researchers induced cell stress – a step that would have led to cancer in most other animals – a widely recognized tumor-suppressor mechanism turned on. That, in turn, activated the LIF6 pseudogene.

Stirred to life, the zombie gene proceeded to carry out its grim program, entering the internal machinery of damaged cells and ordering them to kill themselves. In elephant tissue, the damaged cells turned themselves inside-out, and cancer was thwarted before it could gain any momentum.

And when the researchers suppressed the action of the LIF6 "zombie gene," they found that stressed cells were more likely to form tumors in elephant tissue.

"It's a fascinating study," said molecular and cell biologist Vera Gorbunova of the University of Rochester in New York, who has studied the mechanisms by which naked mole rats thwart cancerous cells.

The collective research of Lynch's group "also raises intriguing questions," said Gorbunova, who was not involved in the new work. The group has offered evidence that in their evolution, all complex creatures have made trade-offs, such as taking on genes (including anti-cancer genes) that increase their life span but reduce their reproductive prowess, or vice versa.

The reanimation of the LIF6 gene may be one way in which elephants have countered what would seem to be a growing threat as they evolved to become bigger, said Lynch.

How? Biological reasoning would suggest that bigger animals would have a greater propensity than very small ones to develop cancer – mainly because they are made up of more cells. Theoretically, the more cells there are, the higher the odds that one or more will go rogue and seed a tumor.

In part, "elephants and their extinct relatives (proboscideans) may have resolved Peto's Paradox" by giving LIF6 new life as a killer of would-be cancer cells, wrote Lynch and his colleagues.

Apparently, not all zombies are to be feared.